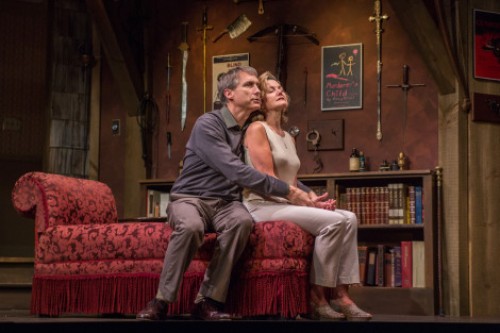 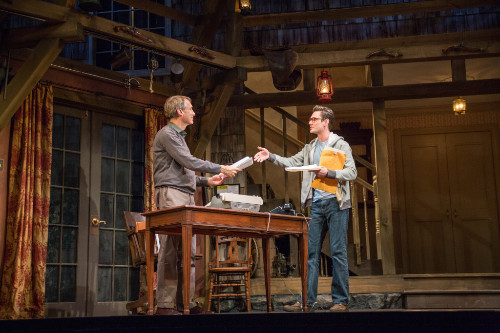 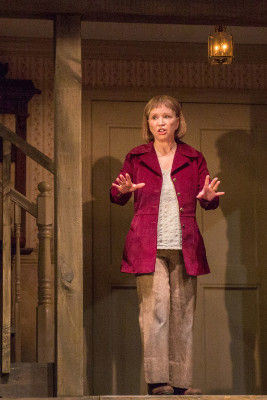 In theatre history it was notable for a kiss between two men. The gay affair was decades ahead of its time.

The estate of Levin has now forbidden an iconic smack on the lips.

In a fun run at Berkshire Theatre Group in Stockbridge the production has one guessing whether the middle aged playwright, Sidney Bruhl (Gregg Edelman) has hooked up with his former star pupil, Clifford Anderson (Tom Pecika).

There are clues that they are lovers.

But this play is full of clues. If you don’t get that in an at times garish and over the top production directed by Aaron Mark, well then, you are clueless.

Yet again Kate Maguire of BTG plays it safe by providing light summer entertainment that hopefully sells tickets. Based on what other companies present it is fair to say that Berkshire audiences are more adventurous.

Not that we didn’t enjoy a delightful evening of theatre. It’s just that there wasn’t a lot to mull over on the ride home.

Maguire’s new associate, Tony Simotes, while formerly at Shakespeare & Company routinely presented farces. In general these were scheduled as light stuff during the shoulder seasons. Maguire has staged at least one such comedy each summer during prime time.

Even before becoming an associate of Maguire, Simotes, one the the best in the business was hired to choreograph the fight sequences. They are executed here with grim reality.

Perhaps I am being a curmudgeon. Ok, guilty as charged. Indeed, why not sit back, relax and enjoy an old chestnut like Deathtrap?

This version is a flat out romp with all those terrific and hilarious twists and turns.

Sidney Bruhl is an over the hill mystery playwright who is better at plotting murders than staging them.

He has received a script to die for from his former student Clifford Anderson (Tom Pecinka) who he can’t quite remember. Was he that obese one?

It seems that Sidney and his wife Myra (Allison Fraser) are at the end of their marital rope. With his career taking a nosedive, other than teaching the occasional seminar, they have been living well on her money.

She is ready to tear up the sheets and kick him under the bus.

But this new script, sure to be a hit and pull in a couple of million (in 1978 dollars), could turn things around. Or so it seems.

The plot thickens. No, make that clots as corpses real and imagined pile up. Or do they?

There are a couple of more characters to round out the mayhem.

The famous psychic Helga Ten Dorp (Debra Jo Rupp) has taken up residence next door. She has come to America on a promotional tour including a guest spot on the then popular Merv Griffin Show.

The final piece of the puzzle is Eric Hill as Sidney’s lawyer Porter Milgrim.

As Martha Stewart might say to the audience combine the remaining ingredients and mix vigorously.

This play is exceedingly clever. But we won’t spoil the fun.

As a part of the script, a play within a play, the set is described in detail. Yet again art imitates life. It has been rendered picture perfect by Randall Parsons with an array of souvenir weapons as well as an authentic pair of handcuffs made by the great escape artist and illusionist Harry Houdini.

Gregg Edelman's Sydney perfectly anchors and manipulates the cast. He is a master of deception saying whatever advances his evil ambition. The interplay with his wife Myra, however, was less than credible. The performance of Fraser was stilted and stiff. At times it seemed that her emotions were pantomimed. We never believed her lines.

As Clifford notes from Sidney’s seminar one of the most important elements of drama is reversal. This Pecinka handles quite well. He conveys the transitions from seeming collaborator and former student, to writing partner, lover and accomplice. Then there is another layer of his actual career ambitions and whether that includes or just uses his mentor. That’s a lot of nuances that Pecinka manages to keep credible up to the, dare I say this, bitter end.

In an over the top romp as the psychic there seems to be some parody of her wonderful Dr. Ruth in the antic accent of Debra Jo Rupp. In this performance the director has let her off the leash with results that are absurdly amusing. You got the sense that Rupp was having a blast in pushing the limits of this role.

As the more subdued character Porter Milgrim the performance of Eric Hill was well defined and suitably restrained. In all that mayhem somebody had to make sense, so why not the attorney?

Even he gets some wild and crazy ideas. It seems he once wrote a play and might be tempted to write another. But the psychic has the goods on him.