A Rousing Close to Season III 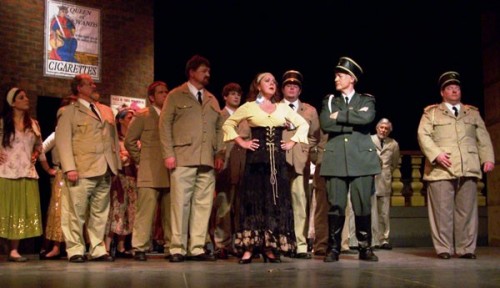 The cast assembled in the plaza, early in Act I. This photo and all others courtesy of Greater Worcester Opera. 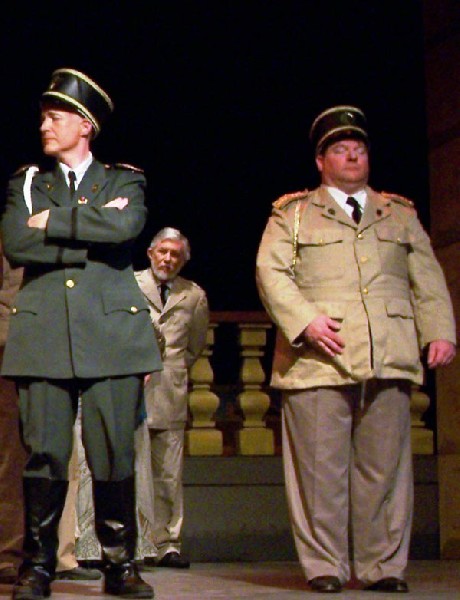 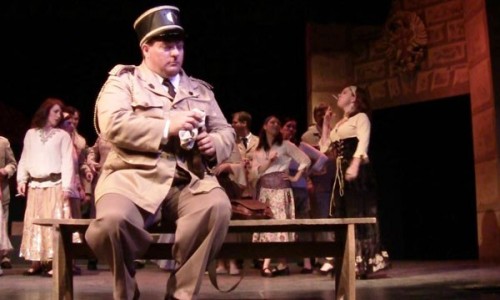 Don Jose, Carmen and the chorus 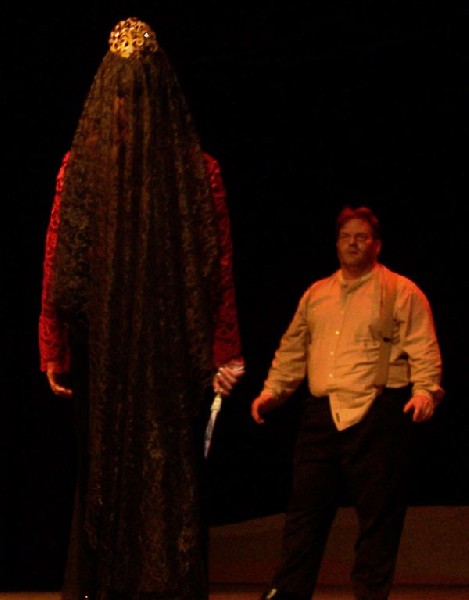 At the end of his tether, Don Jose approaches his final act of degradation. Carmen, with her back to us seems to accept her fate...

For the second year in a row, the Eagle Hill Cultural Center capped off the season with a last minute offering of a geographic rarity, opera. When the opportunity to experience a performance of Bizet’s Carmen, as performed by the Greater Worcester Opera, just a few miles from my home in the boonies, I eagerly joined a few hundred of my neighbors.

Opera is not a medium with which I have strong ties, and I did want to write about the experience.  I thus reached out to my friend Donald (Mac) MacMillan, an ardent opera buff who has attended performances on a number of far flung stages in several countries.

His responded with enthusiasm and agreed to join in this dialogue to help me share our experience with you.

David Wilson - Mac, before we get into details about Carmen and the performance per se, do you have any thoughts about the phenomenon of attending such a performance in a small rural community in central Massachusetts?

Donald (Mac) MacMillan - First of all I'm just so grateful to everyone with the Greater Worcester Opera. I've been a huge opera fan for most of my life but mostly on a much bigger stage. So when I had the opportunity to see "Carmen" in English and almost in my own backyard, I didn't know what to expect. It was an unexpected pleasure, beautiful and went straight to my heart. That's what opera does, and I attribute much of that to how much heart was put into this production. That's a resource you can't quantify.

DW   There are a number of points I would like to discuss with you. The relevance of the central theme of Carmen to our daily life, the liberties taken in the production we saw, specifically deviation from more classical mountings and the particulars of the quality of the performance we witnessed.

MAC  The production we saw was a fine ensemble effort. G.W.O.'s approach with some spoken English dialogue was interesting. It carried the story forward and revealed different dimensions of plot and character that otherwise would have been lost. At times humorous comments were inserted.  At first I found this odd, but as the evening went on it made more sense in the context of a play within the opera.

DW   It is my impression that Bizet’s intent was to depict the downfall of an innocent young soldier seduced by an immoral woman resulting in a kind of self destructive madness. On the other hand, my contemporary lens shows me an example of what I see daily in our headlines, i.e., a portrayal of a selfish self-indulgent man who seeks to possess and control a woman and is willing to destroy her if he can not have what he wants.

MAC  A great story is always relevant, but how a story is told can be at least as interesting. And I think that in "Carmen" there is a real foreshadowing of a changing focus toward realism in 19th century art. Bizet's depiction of such open sensuality and its resulting violence was, in 1875, quite controversial.

Audiences at first were uncomfortable with a story driven by such dark, psychological conflicts. The 20th century took care of that, and that's when "Carmen" really caught on and became as popular as it is today.

DW   Having seen so many productions of mutated Shakespeare plays, I suppose that differing versions of long lived operatic librettos are no anomaly.

MAC  What we have now is a re-worked version of the original opera. Bizet himself continued tinkering with a score that he never lived to complete. The libretto also evolved from spoken monologue to a recitative form. So over time new audiences heard many altered versions, but with the same story and the same melodic, unforgettable tunes that everyone now knows. So really, there is no "classical" mounting of Carmen. It's a hybrid in every sense, and for a small, ambitious opera company it's an especially good fit.

DW   Of course aside from the music, the stage design and environmental setting provide much of the substance of the story. I found only Carmen and Don José to have more than a wisp of personality.

MAC  If you look at all of the characters on stage, most of them are pretty one-dimensional and really don't evolve from scene to scene. In the first act Don José is something of a nebbish. He's tied to army, mother, a childhood sweetheart and he has no self-awareness of how frustrated he must be.

Carmen is the agent of change. It's ironic to me that when he's ordered to tie Carmen and hold her captive he fails completely. She escapes and he is bound to her. For both of them fate begins to take over.

At the very beginning of the opera Carmen is absolutely clear about who she is and what she wants. I believe Bizet and his librettists were also as committed. They had a vision of a woman who would be free and passionate; someone very different from her more Romantic contemporaries. Her embrace of liberty is hardly nuanced, and until she reads her fortune of death nothing can control her.

DW   With the only boundaries being the continuity of the music from production to production, the opera form would seem to provide limitless possibilities for creative productions.

MAC  Of course, it's however you want to interpret it. I've seen enough modern opera productions in Europe to know that anything is possible. It's called "regie theater" and the producer is free to do anything imaginable - the more avant-garde the better. Carmen could be on a spaceship where she'd be tending bar. Don José is a crewman and so on and on. Still, it would be dark and gritty on spaceship Seville - with flashes of color, great dancing, and great beloved music. In the end the tenor surrenders to his murderous instincts and she surrenders to her fate. It's a classic.

DW   Speak a bit about this particular performance if you will. While I found the choruses quite engaging and the arias held my attention I’m not sure I was able to pick out much in the way of nuance, nor do I have enough experience with the form to judge phrasing or coloration. It was pleasing to have a live, albeit small orchestra providing the musical accompaniment.

MAC  Much of "Carmen" depends on big, big dramatic scenes. What happens on stage runs at a very high temperature and supporting that is usually a full orchestra going at full throttle. Big voices, big effects, all go together to make what makes grand opera "grand." So, here, there's a trade-off that you have to live with in exchange for other rewards. For example, with just a piano to set the pace and a small number of instruments behind it, G.W.O. delivered a more than credible rendering of a grand opera score. That's no easy task

DW   It also seems to me that to go through the rigorous rehearsals and pre production preparation, set design and building, costume design and fitting, for just a few performances declares a love for the process that is quite astounding.

MAC  Absolutely, bravo! Everyone should love something so much.

These are, again, part of the limitations for a small opera company. How the G.W.O manages to assemble three revolving casts, construct scenery, move between two venues and produce something of quality is more than impressive. It's a miracle!

DW   Over the last three years I have become quite used to finding unexpected pleasure in performances on the stage of the Eagle Hill Cultural Center and last year the season ended with again a performance by the G.W.O. and performances of Gianni Schicchi and Trial By Jury. The local population seems to feel prideful of this anomaly in their midst, and I suspect that for many in the audience that night last year or this one was the first live opera production that they had experienced. They enjoyed it and the cast.

MAC  On the stage were some truly talented and dedicated singers. At the big opera houses there would always be a conductor and a prompter to fall back on, but here the singers were on their own. Like a high wire act with the audience so close - in such an immediate space with no place to hide - any vocal imperfections or lost lines are there for all to see. What I experienced was uniformly secure, poised, and polished. This "Carmen" developed as a kind of chamber opera with spoken drama cleverly woven through the score. In the end something new was created out something very familiar.

DW   From the buzz I heard after the show, I think a good many of that audience would be interested in attending more opera should the opportunity present itself. Would you care to share any final thoughts?

MAC   As a final thought? No doubt for me the highlights were some of the more subdued scenes. I really felt that this production was at its best here. Michaëla's last courageous attempt to rescue Don José was such a poignant scene - it really touched my heart. Also in Act III, the Card Scene absolutely shined. Vocally and dramatically the gypsies Mercedes and Frasquita wonderfully contrasted their good fortune against Carmen's ominous reading of death. The whole arc of the story turns on those cards. That's great theatre on any stage, but at Eagle Hill I could almost read the cards myself.