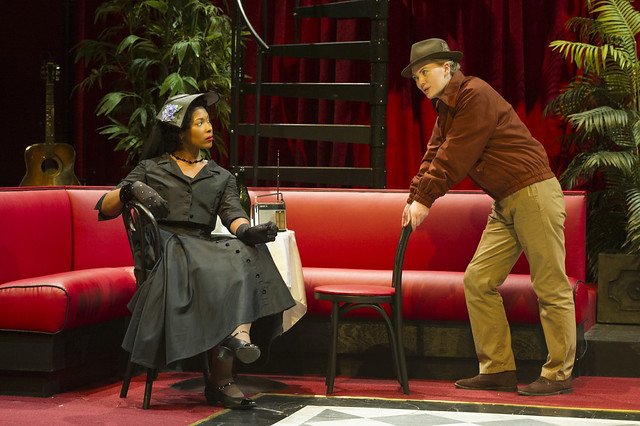 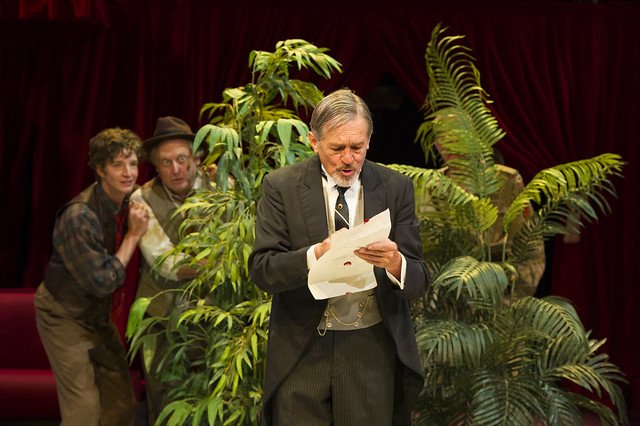 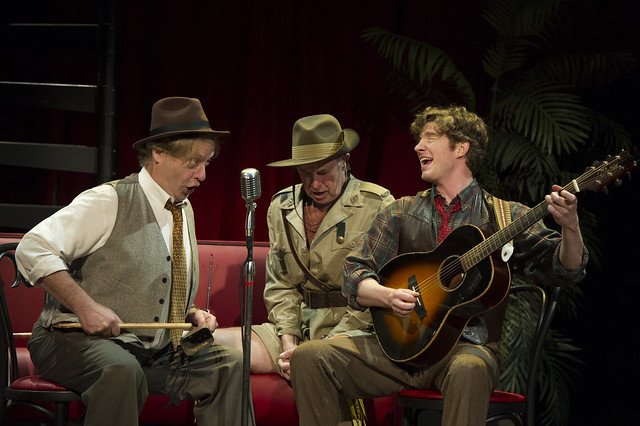 “If music be the food of love, play on.
Give me excess of it; that surfeiting,
That appetite may sicken and die”

Sharply directed by Allyn Burrows Twelfth Night is bright, brisk, crisp and hilarious. It’s a long, fun-filled evening at Shakespeare & Company that started at 7:40 PM and including intermission concluded at 10:20 PM.

It is a familiar tale with a new twist. Yet again the high born twins, Viola and Sebastian, are washed up near drowned on the shore of Illyria. This time with infusions of vintage rock and roll in the late 1950s. Occasionally the players get to twist and shout.

Separated and penniless the siblings assume the other to be dead. In order to survive with the help of her rescuer Viola, nicely played by Ella Loudon, is advised to pass as a boy.

In the employ of Orsino (Bryce Michael Wood) as his page Cesario is sent with wooing messages to Olivia (Cloteal L. Horne). The noble woman is in mourning her brother with a vow not to wed for seven years.

To deliver Orsino’s message Cesario, as Viola comes to be known, must get past a motley crew of relatives and retainers. They range from drunk and disorderly to priggish and officious. Cesario exhibits wit and strategy to thread through the comic range of obstacles. Having gained an audience there is one of many absurd reversals. Olivia is more smitten with the messenger than by the message. The messenger however is enchanted by Orsinio.

As a trope Orsinio is in love with the idea of love. With the ersatz boy he muses on the nature and caprices of women. There are layered insights as the audience filters how Cesario/ Viola responds to his theories of  romance. It fuels a multi layered confusing bromance.

On the Elizabethan stage there was an added dimension for the Bard’s favorite trick of gender bending. Cesario would have been played by a boy, as girl, disguised as boy. In merry old England it would seem that everybody was doing everything.

In Lenox, however, there is a single dimension rather than a double fault. The costume of Govane Lohbauer has Viola suitably neutered. Long blonde hair is tucked under a cap and a vest muffles breasts. She wears loose khaki pants that camouflage a girlish butt.

Later in the play, when after adventures Sebastian appears, the twins are similarly attired. Initially, with great comic impact, Olivia is delighted at the prospect of double lovers. With some disappointed resignation she must settle on just one. Oh drats.

Through two delightful acts this production careens about like a snooker game. Burrows gets fine work from a diverse array of gifted players one ever more absurd than the next.

What fuels the madness is that everyone is in love with Olivia who, for her part, will have none of them. Save, of course, the mismatch with the boyish Cesario.

The most improbable suitor is the wonderfully outlandish Sir Andrew Aquencheek played as a para military Aussie by Nigel Gore. The skilled actor always brings as a je ne sais quoi to his many roles. This time it was such a delight to see him outrageously off the leash in a comedy.

Let’s give full credit to Burrows. It’s particularly difficult to do comedy particularly with jokes and gags that are hundreds of years old.

We know what’s coming when the stern, up tight majordomo is suckered into believing an alleged letter from his mistress. As a prank it was forged by her lady servant Maria (Bella Merlin). As Malvolio, Miles Anderson milks the letter with whacky reactions to every phrase. Ever more outrageously he is lured into thinking it a sincere love letter. To please his mistress he is instructed to wear yellow stocking with garters. Maria’s mean trick is that these are what her mistress truly detests.

Sure it’s an old gag but Anderson’s outlandish performance was so fresh and exuberant that it brought the house down with gales of laughter and applause. The misdirected stunt lands him in the clink and earns a later bashed and battered return. There was a brilliant costume change designed by Lohbauer.

There was much rollicking fun from the musicians Sir Toby Belch (Steven Barkhimer), the drunken uncle of Olivia, and his fool of a nephew Feste (Gregory Boover). Their musical interludes brought diversion and variety to this twice told tale. Even Gore chimed in on ukulele.

With many delicious twists and turns the second act cavorted about to that slam bam crashing ending. Despite many homoerotic accents it all ended quite straight with each of the lovers paired off with the proper gender. Both Olivia and Orsino were smitten by Cesario. The latter was implied but not fleshed out by Shakespeare. Perhaps he drew the line on the love that dare not speak its name. That would take a couple of more centuries.

With a thrust stage there is a spare but functional set by Cristina Todesco and adequate lighting by Deb Sullivan. Typically, the company has a spare and economical approach to production value. Notable, however, was a neat trick of having the incarcerated Malvolio pop up from below deck into a large bird cage.

There were uniformly superb performances. But it would be remiss not to mention Bella Merlin in the supporting role of Maria. She was delightfully full of mischief. That was crisply accented with sprightly skips and jumps. While she did something terrible to Malvolio, when confronted by Olivia, she wiggles out of blame. We don’t quite believe her.

For a true escape from the slings and arrows of outrageous fortune get thee, not to a nunnery, but my friends, to the Tina Packer Playhouse. It’s fun, fun fun, until Daddy takes the T-Bird away.