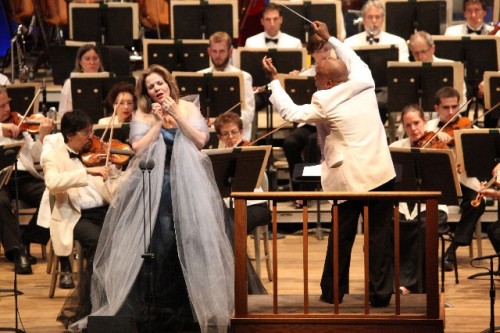 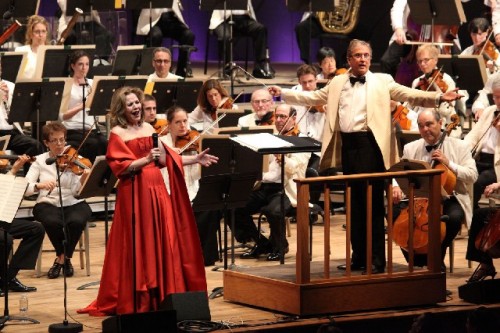 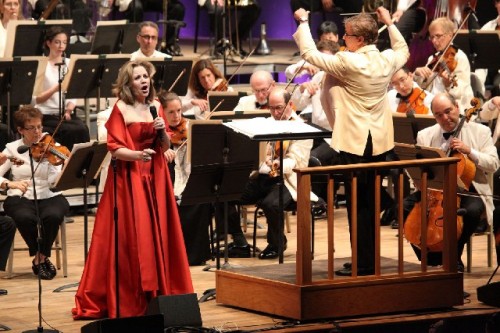 It’s been an inclement week in the Berkshires but last night was just glorious for the launch of the BSO’s Tanglewood season featuring the ever magnificent soprano “The People’s Diva” Renée Fleming.

On Thursday night she endured the bad weather to hear James Tayor who she described as "A National Treasure."

In the packed Shed she appeared in a two part program that combined serious and popular orchestral and vocal selections from opera to Broadway.

The first part of the evening was conducted by William Eddins. After an intermission Rob Fisher took over.

This summer Fleming will spend several weeks in the Berkshires.

But it’s no vacation for the sensational soprano who roams the world appearing in opera houses and concerts when not in the recording studio.

At the renowned Williamstown Theatre Festival she will add another dimension to her career appearing as an actress. She stars as, what else, a diva in Living on Love. It’s a new comedy from two-time Tony Award winner Joe DiPietro, adapted from a work by Garson Kanin, and directed by three-time Tony Award winner Kathleen Marshall. It runs from July 16 through July 26.

Of course the WTF production is one of the summer’s hot tickets. During a press conference I asked if the play is headed for Broadway? There were denials all around but if the play is well received, only local reviews, bet on it.

During some face time I asked if she might follow Idina Menzel and Audra McDonald to Broadway? I expected to have my head taken off but she was measured and low key stating how opera schedules are planned four and five years in advance.

The WTF play is a dramatic role but she told me that opera singers are like “weight lifters.” They need a few days between pumping iron. I suggested perhaps an analogy of baseball pitchers. With a laugh she liked that better. Pressing on the issue of Broadway musicals she admitted that there have been offers. More from the interview will follow soon.

Having years of hard work pay off as she told a reporter she can now “cherry pick opportunities.” At mid career the 55-year-old soprano faces options and decisions about the stresses of filling opera houses without the benefit of amplification.

It was an issue she shared with the Tanglewood audience as she delivered a selection of Broadway tunes. Today Broadway is miked but she speculated on how they managed to perform back in the day night after night. She also informed us that she loves Broadway musicals and performed as Eliza Doolittle twice by the time she was sixteen.

Following Schwantner’s “Freeflight,” a fanfare, and Copland’s Night Thoughts from “Music for a Great City” Fleming floated on stage in an enormous floral gown with a gossamer shawl.

She performed a “serious”  work Barber’s “Knoxville Summer of 1915,” Opus 24 for soprano and orchestra. From our seats mid point in the Shed it was impossible to follow the lyrics which were printed in the program. Essentially the selection was lost on us.

That was followed by Eddins, a particularly physical and athletic conductor, romping through the sharp rhythmic accents of the percussive “Short Ride in a Fast Machine” by the post minimalist John Adams.

For the second part of the program it was pure Pops.

The selections were meant to please a general audience starting with Fisher conducting the Overture to Rogers and Hammerstein’s “South Pacific.” As one of the first original cast LP’s (1949) I wore out the grooves during that summer in Annisquam. We saw the hit show on Broadway and years later I could do a decent “Enchanted Evening” in the manner of Ezio Pinza.

At a kid it amazed me when Mary Martin actually took a shower on stage singing “I’m Going to Wash That Man Right Out of My Hair.”

No such luck at Tanglewood as Fleming returned in a more form fitting red gown. She told us that she made the costume change to leave more room on stage for the wonderful BSO.

Expressing her admiration for the players and their precious instruments she described how many buy seats for them on flights. With a pause she added that she books extra seats for her “clothes.” Hey, it’s not easy being a world class diva.

Reaching out for a microphone she gave an easy, understated delivery to a selection of Rodgers & Hammerstein standards “The Sound of Music” which was majestic as she sustained the signature high notes, “Wonderful Guy” from South Pacific, and “Hello Young Lovers’ from The King and I.

She exited while Fisher conducted the Overture to Gershwin’s Girl Crazy. She returned with a peppy, syncopated “Fascinating Rhythm” from the Gershwin Brother’s Lady Be Good.

Putting away the mike she rendered the magnificent “Summertime” from Porgy and Bess. Prefacing it she commented, looking about the Shed, that “This is what it’s all about.”

Returning for an encore she asked if there were any singers in the audience? There was an enormous chorus as many joined her on “I Could Have Danced All Night” from My Fair Lady. Evoking a bit of personal history it’s a song she performed as a teenager.

The audience was thrilled and demanded more.

She returned and sat for a contemporary standard the wonderful Leonard Cohen composition "Hallelujah." Based on the recording by Tim Buckley (February 14, 1947 – June 29, 1975) the song has become a subdued and gorgeous anthem taken on by many artists. It was wonderful to have Fleming’s rendering which was up to the canonical challenge.

Indeed we could have “Danced All Night.”

What an "Enchanted Evening." Now we will look forward to seeing her at WTF.

At mid career for Fleming, as Tony Bennett, who appears later in the Tanglewood season, would put it “The Best Is Yet to Come.”