The Etiquette of Death A Community Project 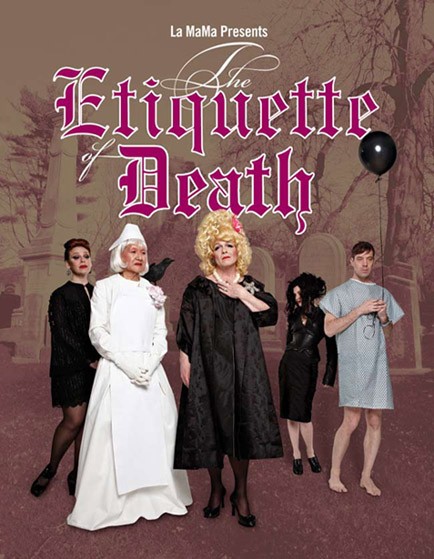 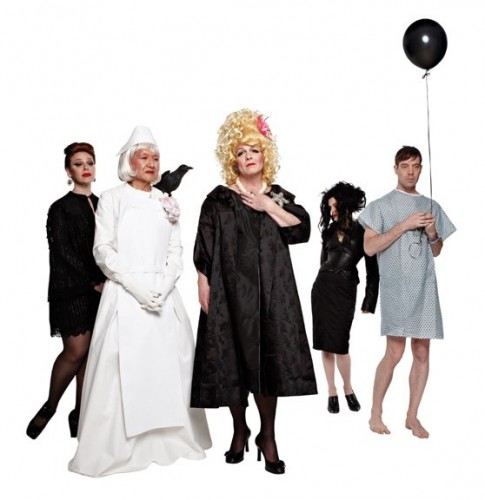 The cast a hoot in La Mama celebration.

What better way to celebrate La MaMa’s 50th Anniversary season than to round up a gaggle of actors and writers, assemble a musical play about death, get Ridiculous Theatre legend Everett Quinton and choreographer Julie Atlas Muz, former Miss Coney Island and Miss Exotic World, to co-direct it, hire a 7 piece orchestra led by Jeremy X. Halpern, and return them to the Ellen Stewart Theatre at La MaMa where not a few of them have been treading the boards for decades. This is precisely what actor, artist, singer, writer, and long time East Village catalyst Chris Tanner, did. And the answer is — there is no better way to celebrate the late Ellen Stewart and her legendary theatre than to bring in her family back into the fold.

While the storyline is relatively simple – we are treated to a 2 ½ hour duel to the death between Joan Girdler (Chris Tanner), the latter a talk show hostess and beauty product entrepreneur whose son Joey (Brandon Olson) is dying of AIDS, and Death (Quinton Everett), its execution, with many corollary vignettes thrown into the mix – is anything but. Add a fabulous set (Steven Hammel) – just as good, if not better than that of Broadway’s Jesus Christ Super Star’s – costumes that have many of the dancer-actors dressed as pigeons (Becky Hubbert), and top it off with Isis, the diaphanous winged goddess of fertility, played by the beautifully voiced Greta Jane Pedersen, and presto, you get a near-camp musical extravaganza.

The evening begins surprisingly, but fittingly so, with La MaMa founder Ellen Stewart – brilliantly channeled by Augosto Machado, long time East Village star, and one of Ellen’s oldest La MaMa “babies – welcoming the audience to the theatre by ringing a bell just as Ellen always did at each production. For many of us whose history with Ellen goes back decades – I like to say that I knew Ellen before her accent – it was bit sad being reminded that the Ellen we thought would live forever is no longer with us. Augosto, doing double duty, also plays Joey’s nurse. His heartfelt monologue on the role of caregivers, during the height of the AIDS epidemic during the 1980s was one of the more touching moments in the play.

The play belongs to Tanner and Everett, its two dressed-in-drag divas, albeit mostly in the number of words they deliver, the scenes they appear in, and the songs they sing. I am talking stage time. Though not particularly laughs riots as written, and their characters are not lovable either, it is fun to watch the dueling divas negotiate the twists and turns of the script. One plus is that Tanner has a beautiful voice and an extremely compelling stage presence. Why he’s not in a Broadway play – he certainly can reach the back of the house without a mike – is a question I always ask myself. He needs to move uptown if only to show it what it is missing. Though both actors carry the play forward to its climax when the entire cast gathers to sing “We’re all going to die” over and over again, the parts of the musical that show the most promise, are the non musical asides.

The two most compelling scenes, attributed to Taylor Mac, take place in a restaurant. Here a slightly rotund Jacky (Beth Dodye Bass) – she also play a pigeon in the play – is seen stuffing her face, plate after plate, like a hungry pig, while Holly (Robert Appleton), drinking to the point of tipsy and then some, goes on and on about friends of theirs that are dying.  Both, finely acted scenes, especially on Appleton’s part, are a laugh riot. Eventually, Jacky, takes the slightly drunks Holly’s arm, after having eaten everything in sight, and ambles off. At the end of the play, stuffed with much fun and silliness, we all do the same.