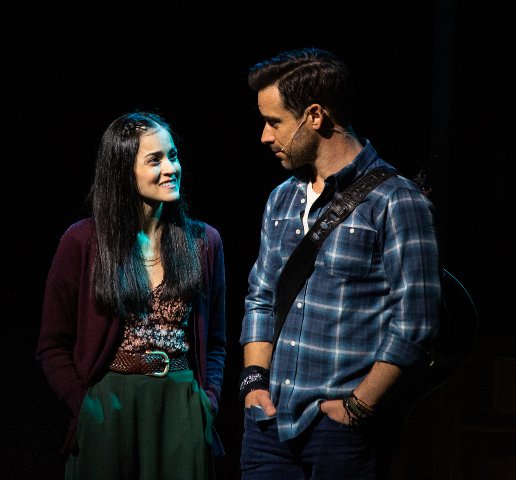 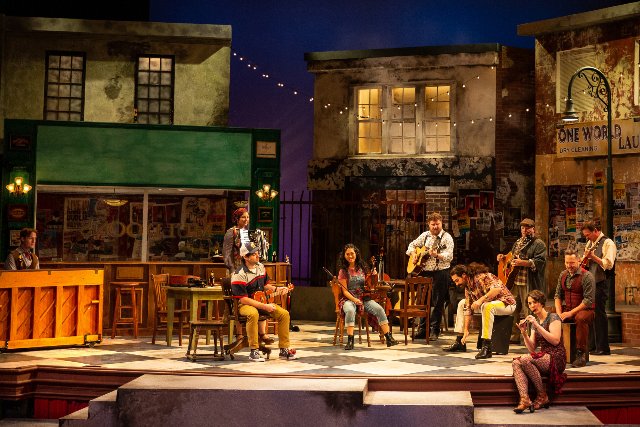 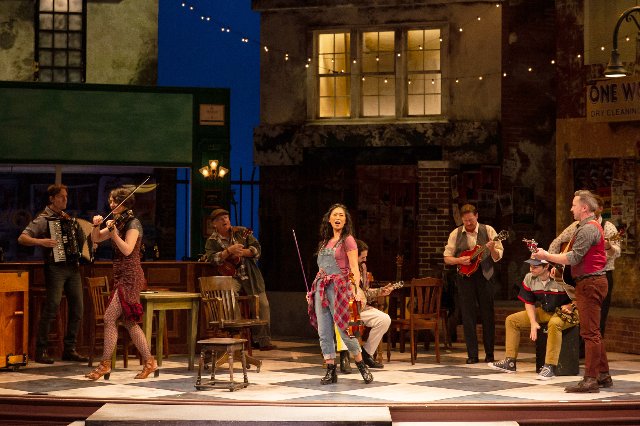 As the audience filtered in and took their seats there was already a jam session on stage. The ten musicians and actors were performing lively Irish folk rock.

There was a plethora of typical instruments including guitars, mandolins, banjo, bass, two violins, accordion, piano, percussion and a bit of penny whistle. Several of them switched off on instruments and rotated solo and ensemble works. Each seemed to have a featured moment as we intuited their personas in the ensuing drama.

Even in supporting roles it is much to the credit of this stunning production, directed with subtle nuance by Gregg Edelman, that they were presented as characters rather than caricatures. It’s so easy and common to stereotype the Irish. Once portrays them with dignity and respect.

There was compelling verisimilitude to what Astrid and I experienced several years ago celebrating my birthday in a raucous Dublin pub. The Guinness flowed freely as a wonderful band whipped the audience into a joyous frenzy. Astrid joined in with the small, packed dance floor.

In Ireland everyone is a poet as I have explored deep in my DNA. In that land of bards Once is indeed an Irish tale to tell with a whiskey and pint.

We were in Ireland to connect with the roots of my mother’s heritage. As a fragment of the Irish Disapora the Nugents settled in Rockport on Beaver Dam farm while her father’s family, the Flynns, worked the quarries of Cape Ann.

I have published a book about them and with my sister am researching another about growing up in Annisquam a hamlet of Cape Ann.

Much has been made in the past few years of efforts of bringing diversity to the stage. That came home to me vividly as this soft and gentle Irish musical inched its way into my heart and soul.

There was a non sequitur disruption when the voice of artistic director Kate Maguire made pro forma PSAs.

Then it seems the real play began. Guy, as in a guy, (David Toole) performs a song “Leave” but with anguish and dismay abandons it mid way. It and his other songs are about the girlfriend who has emigrated to New York. There seems to be no point to carrying on with a career in music that is going nowhere. He even intends to leave the guitar behind.

Taking the measure of Toole he was indeed like one of those guys we saw in the Dublin pub. He’s a handsome bloke in scruffy clothes (Elivia Bovenzi Blitz) wearing a generic wool cap. He has a day job fixing Hoover’s in his Da’s (Kurt Zischke) wee shop.

But Girl, as in girl, (Andrea Goss) listened to his music and is enthralled. Much is made that she’s Czech which makes a point about Ireland today. There are riffs about how she fits into the culture.

The action of the play entails the next week during which she saves and inspires him. It starts with a deal for him to fix her Hoover. “It doesn’t suck” is the comical line. She will pay him with her own song and piano playing.

Their initial duet “Falling Slowly” is a corker. The music of the show was written by the initial Guy and Girl, Glen Hansard and Markéta Irglová. It and the production in general won every award imaginable from Oscars, to Tonys and a Grammy as well as more for the London production. This is an amazing legacy for what started as a low budget, Indy film that was shot in just 17 days.

While “Falling Slowly” is the show stopper there is much fine music. In particular I was entranced by Guy’s “Gold” a tribute to the value he placed on his lost girlfriend. There is a second rendering of a capella by the entire company. It was thrilling and goose bumpy. Also outstanding was “When Your Mind’s Made Up” with Guy, Girl and the ensemble.

The killer of Once is that it totally landed Broadway on its head. With a low key, understated manner it is the polar opposite of the typical musical with mega production values. Here the audience is emotionally devastated to be drawn in by a simple, sincere, tender and unrequited love story.

Those are the elements that transfer so cohesively to the Colonial stage. The production gets just about everything right. Start with a simple and aptly designed set by Josafath Reynoso. Scenes take place center stage or on its fringes like Da’s shop. Performers come forward for their character vignettes then meld back into the bar. The lighting design by Matthew E. Adelson crisply defines plot shifts and settings.

As the week passes it is clear that Guy and Girl are falling in love but it’s complicated. She has a child, the utterly adorable six-year-old Ivanka, (Ella Fish or Emma Proskin). While he pines for his ex in New York.

Girl has a plan to get a loan to fund a single recording session. That demo tape will open doors in the recording industry to be found in America.

The appointment with the banker (Andy Taylor also music director) is a hoot. First she buys Guy a decent suit. With a woman’s touch she gets the old penny to shine. All too readily the banker is taken in by the pitch after Guy performs a sample song.

Then the banker whips out a guitar (I paid a fine penny for it) and hilariously wafts into a really bad song “Abandoned in Bandon.” The clincher is that he will perform (cello) during the session.

That sets up a complication as the studio/ music shop owner, the wonderfully humorous Adam Huel Potter, objects to mixing capitalism with music.

There were wonderful moments from the supporting cast. The very tall and imposing Reza (Pearl Rhein) romped the stage with abandon while singing and playing the fiddle. She solos with “Satisfy Me” and “Howth Head” and teams with Billy (Adam Huel Potter) on the comical “Butterfly on the Dance Floor.” With exuberance she even scrambled up to tower above us.

Not enough can be said for the terrific character acting of Will Boyajian. With a wild mop of frizzy hair, and a heavy beard, he looked anything but Celtic but blended nicely with the Gallic revelry. With a long lean body he had slick moves that recalled vintage Ray Bolger.

While there are many welcome sidebars Once belongs to Guy and Girl. These actors had uncanny synergy as their love stutter-step unfolded with a respectful distance. Remarkably, they never even kissed.

Demo CD in hand Guy is ready to leave for the Irish dream of a better life in America. He asked Girl to join him with Ivanka. She adds, what about my mother? But such was not to be.

They both have commitments to others. For the sake of Ivanka she will get back with her husband. Girl gets Guy to call the ex (EJ Zimmerman) who will have him back.

He would go alone to the land of opportunity. In a parting scene Da gives him a check to get started in America. It was a generous and loving letting go. Knowing it would be the last of being together.

It evoked a lump in my throat which morphed to sobbing as the company reprieved the devastating “Falling Softly.” There was the overwhelming emotion that Guy’s emigration echoed that of my ancestors.

As we learned first hand, other than for dire circumstances, why would one ever leave Ireland?

I staggered out of the theatre and Astrid, herself an immigrant, on a bench talked me down from an utterly shattering theatrical experience. For a suspended moment it was impossible to ease back into daily life.

On the ride home was talked about family, ancestors, baskets and what coming to American truly means.