Whale of a Tale at Sideshow Theatre Company 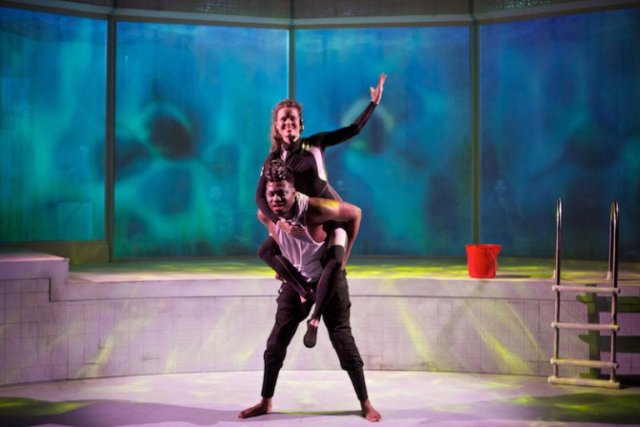 Sutter as Dawn and Geffrard as Tilikum. Photo by Jonathan L. Green.

“Tilikum, the infamous SeaWorld killer whale, has died.” That was the headline in the Orlando Sentinel on January 6, 2017. Sideshow Theatre’s world premiere production of Tilikum takes the story of that sea creature and creates a poetic, percussive fantasy that demands that we pay attention to a range of social justice issues.

On the surface, Tilikum is a documentary treatment of the life of an orca whale in captivity in a marine theme park. But it also enables Tilikum to tell his own story, starting with “When they snatched me.” He repeats that line again and again.

Tilikum is not subtle in its emphasis on its messages. But the staging by director Lili-Anne Brown is creative and memorable. Tilikum is staged in the pool of a marine theme park, where Tilikum (Gregory Geffrard) is dumped from his net by the Owner (Matt Fletcher) who has bought the six-ton whale, expecting his investment to be enhanced when Tilikum mates with the female whales.

The rear of the stage is the glass of the observation pool, where the shadows of female whales and calves swim. (Paul Deziel’s projection designs are quite remarkable and beautiful.) Behind the pool, three musicians perform the percussive music that forms the soundscape for the play as well as the language with which the females communicate with Tilikum.

The Owner hires Dawn (Sigrid Sutter) as the park’s new orca trainer. She bonds with Tilikum and the two perform a sensual dance in Tilikum’s pool. Tillkum, lonely and depressed in captivity, longs for his pod, remembers his mother, and misses “strumming love songs for Koosa Labal… Never a fish so fine as Koosa Labal, and when I was king enough to court her she’da been mine.” Playwright Colón makes us see the pain of captivity (slavery, imprisonment). “How long I’m in for?” Tilikum asks repeatedly, objecting to the tiny module he lives in.

Dawn hosts the orca show for the audiences that flock to see the huge creature perform. Later the Owner, from his control booth next to the pool, is concerned when Dawn bonds too closely with the animals and demands that she stop swimming the whales on her own. But Dawn has other ideas, including a new “late night” act with Tilikum.

Geffrard, a versatile actor, gives a powerful performance as Tilikum. The three musicians add texture and drama as well as the whalesong sound. Coco Elysses is composer and music director. The other two musicians are Melissa F. DuPrey and Joyce Liza Rada Lindsey. Wearing mask-like face paint, they represent the whale god Thixo; the whale goddess of violent death, Lambo; and the whale goddess of peaceful death, Waresa. Throughout the production, they drum Tilikum’s praises and communicate with him in his prison, as he tries to learn their tongue.

Tilikum follows the details described in the news story about Tilikum’s death. His story is also told in a 2013 documentary, Blackfish, which Colón mentions as one of her inspirations for the play.

Before Tilikum begins, the obligatory turn-off-your-devices message includes a reminder. At the Biograph Theater on Lincoln Avenue, we are on land stolen from indigenous peoples: the Miami, Illinois, and later the Sauk, Shawnee, Winnebago, Kickapoo and Pottawatomie tribes.