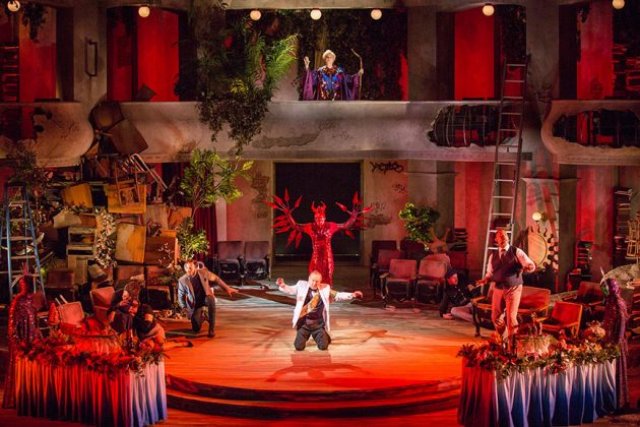 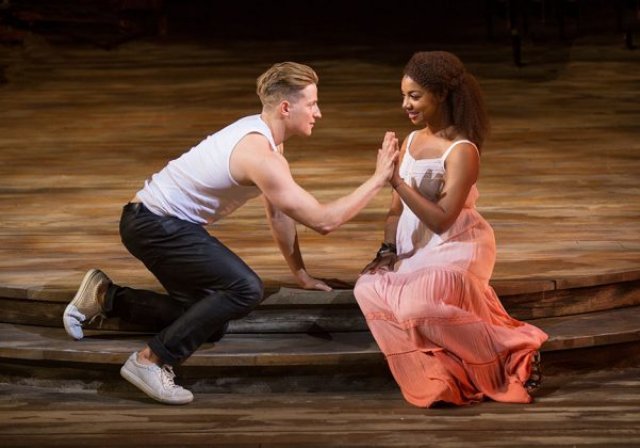 Opening Nights at the Globe are always eagerly anticipated.  But I feel there is a special sort of electricity that runs through the audience for an opening which debuts in a fitting setting that recreates the outdoor venue of Shakespeare’s Old England, with Arden Forest, a favorite location of the Bard for several of his plays.

This time the play’s setting is wherever our imaginations believe it is.  For me, it was about 600 miles from London on an imaginary island somewhere in the Mediterranean Sea.  In short (which Shakespeare’s plays are not), “The Tempest,” centers around Prospera, the Duke of Milan, who has been thrown out of power by her wicked brother forcing her to live in exile on a desert island.

For company, she has only her daughter Miranda, spirits who are native to the island, along with her beloved books.  The books are the source of her dark magic, which she uses to lure her enemies to the island so she can exact revenge.  But her plot could destroy Miranda’s happiness, so Prospera must choose between her own anger and that of daughter’s future.

It’s a Hobson’s choice and dilemma that resonates today in America’s polarizing political machinations of our body politic.  For those who think Shakespeare and his plays are outdated, perhaps it’s time to think again as to their relevancy.

The Old Globe’s prescient Erna Finci Artiti Viterbi Artistic Director Barry Edelstein, himself a Shakespeare scholar, understands how the hidden magic in Shakespeare’s plays can still inspire and entertain.  His tapping of Irish director Joe Dowling to helm the technically challenging Old Globe production of “The Tempest,” is both a stroke of genius and of timing.

Dowling ran the famous Guthrie Theatre of Minneapolis for 20 years and is an experienced stage director of some 50 plays who brings a wealth of theatrical riches and experience to the Old Globe’s production of Shakespeare’s last great play; underscoring the importance of forgiveness and redemption.

There are twenty-two performers in the 2018 company of players.  Led by the wonderful Kate Burton as Prospera, in a cross-gender performance with several other male characters that are also played by females.  Burton is a classically trained actor who commands the stage when she’s upon it. In today’s theatre, actors of color play all characters, and some in cross-gender performances which is becoming more the norm rather than the exception. Remember, in Shakespeare’s day all the characters were performed by men. We bought the premise then, so it shouldn’t be too difficult for us accept it now.

In director Dowling’s splendid production Ms. Burton reigns over her island and those who step upon it.  It’s a bravura performance.  She is both strong and bitter with her existence.  However, in portraying Miranda’s (an appealing Nora Carroll) mother, Burton adds another dimension to her performance: making the resolution of forgiveness and redemption at the end of the play make more sense.

Offering solid support to this glittering, technically brilliant, production are Philippe Bowgen as Ariel, Prospera’s loyal island spirit.  I remember his highly nuanced comedy performance as Pablo Picasso, in the Globe production of “Picasso at the Lapin Agile”; Lizan Mitchell as Gonzala, Robert Foxworth as Alonso; Manoel Feliciano as the wonderfully evil Caliban; Rene Thornton, Jr. as Antonio, Eric Weiman as the Shipmaster; Renardo Charles Pringle Jr. as the Boatswain and Daniel Ian Joeck as Sebastian, the love interest of Miranda.

The character of Sir John Falstaff and his bumbling mates, Shakespeare’s favorite comic foils, are usually inserted into the action of his plays whenever possible.  In this “Tempest” production that ploy falls to the comic characters of the drunk Stephano, and his bumbling, whining friend Trinculo, who play the characters to the hilt by Robert Dorfman, and Andrew Weems, respectively. This stellar production is also blessed with an ensemble cast to die for.

The production under the seamless direction of Joe Dowling is a visual feast for the eyes, and not be missed.  The Old Globe is without equal when it comes, to technical credits for their productions.  Set Designer Alexander Dodge, renders a performance space that is filled with eye-popping glittering, sparkling, and breathtaking costumes designed by David Israel Reynoso.  Philip Rosenberg provides the nuanced, mood-inducing, Lighting Design. Jonathan Deans, Sound Design is appropriate, and the storm scene that envelopes the characters at the beginning sets the tone for what is to follow technically.

The Old Globe’s presentation of “The Tempest” is an impressive production to kick off the Globe’s 2018 season of its Shakespeare Summer Festival in the Lowell Davies outdoor theatre. The production runs through July 22nd. “Much Ado About Nothing,” follows and runs from August 12th through September 16th.  And remember, a great country deserves great art.  And no community in the country supports its arts more than San Diego.