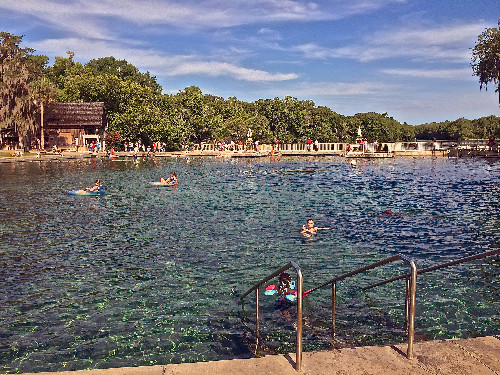 The Old Spanish Sugar Mill restaurant (seen, in the photo, at the far side of the pool) lets customers cook their own pancakes on griddles built into the dining tables. PHOTO CREDIT: Susan Cohn/Daily Journal.

Ahhh…the ole swimming hole. That ideal lazy-day spot for drifting-on-an-air-mattress. You may think it exists only in your imagination, but it can actually be found in Florida’s De Leon Springs State Park, not far from Daytona Beach. Fed by a spring that flows at a rate of about 20 million gallons a day, this natural swimming area remains 72 degrees year-round. Approximately 500 feet in circumference, the pool has been improved with concrete sides, stairs, a ramp with handrails and a swimmer lift, but retains its sand bottom. Picnic tables, grills and a playground are set in the surrounding lawn, all shaded by moss hung, live oak trees.

De Leon Springs was first occupied as early as 8000 BCE by local Native American tribes. In the 16th century, Spanish forces passed through (perhaps including Explorer Juan Ponce de León, whom history links to the fabled Fountain of Youth). The area came under American ownership after Florida became a territory in 1821. Tourists started coming in the 1880s because of the warm springs' alleged rejuvenating powers. The site was renamed Ponce de Leon Springs and the spring itself was referred to as the Fountain of Youth. The property became one of Florida’s famed roadside attractions, featuring tropical gardens, a jungle cruise, and a water skiing elephant. The State of Florida and Volusia County eventually purchased the land to protect the spring. But the spirit of Vintage Florida remains: A park billboard depicting Ponce de Leon arm in arm with a bathing beauty proclaims the area to be
“Nature’s Cameraland.”

Alligators, white-tailed deer, turtles and otters are just some of the wildlife in the park’s 625 acres. Seasonal sightings include Florida black bears en route from the Ocala National Forest to the manatees (sea cows) seeking relief from the cold during winter. The park is on the Great Florida Birding Trail and among the birds seen are egrets, ospreys, vultures, American bald eagles, American white ibis, American coots, great blue herons and sandhill cranes.

AND ABOUT THOSE MAKE-IT-YOURSELF PANCAKES.

Start your day at De Leon Springs State Park with a stop at The Old Spanish Sugar Mill restaurant, located in a 100 year-old replica of an 1830s sugar mill.   Each table is equipped with a griddle and servers bring large pitchers of homemade pancake batters (both a stone-ground mixture of five different flours and an unbleached white flour), allowing customers to pour, cook and flip. Blueberries, bananas, peanut butter, pecans, chocolate chips, and applesauce are provided for the creation of every sort of pancake. Sausage, bacon, ham, and eggs are offered as accompaniments. Sugar Mill Operator Patty Schwarze said, “Opened in 1961 by my parents, Peter and Marjorie Schwarze, the restaurant has been serving pancakes in our unique, do it yourself style ever since.  My father came up with the idea after years of entertaining customers who came to pick up bread from his bakery.  He'd heat a griddle, mix up some pancake batter, and everyone would make pancakes. Folks shared stories of their studies, theater, food, or whatever deep philosophical issue happened to come into conversation. The pancake griddle became the centerpiece around which to gather. De Leon Springs and the Old Spanish Sugar Mill were the perfect setting to take this idea and open a restaurant.”

De Leon Springs State Park is about an hour north of Orlando and 1/2 hour inland from Daytona Beach. Fishing is permitted in the spring run from the shore or the fishing dock.  Guided eco-tours are offered by boat from the park to the adjacent Lake Woodruff National Wildlife Refuge and canoes, paddleboats and kayaks may be rented. A visitor center tells of the park’s cultural and natural history. The Old Spanish Sugar Mill is open daily. 601 Ponce Deleon Blvd, De Leon Springs, FL. For more information visit https://www.floridastateparks.org/park-history/De-Leon-Springs or http://www.oldspanishsugarmill.com.

AND REMEMBER: One of the great things about travel is that you find out how many good, kind people there are. Edith Wharton

Susan Cohn is a member of the North American Travel Journalists Association, Bay Area Travel Writers, and the International Food, Wine & Travel Writers Association. She can be reached at susan@smdailyjournal.com. More of her stories may be found at http://ifwtwa.org/author/susan-cohn