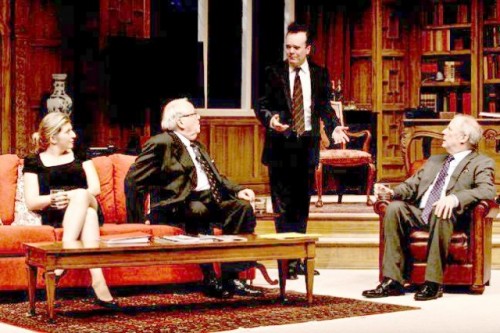 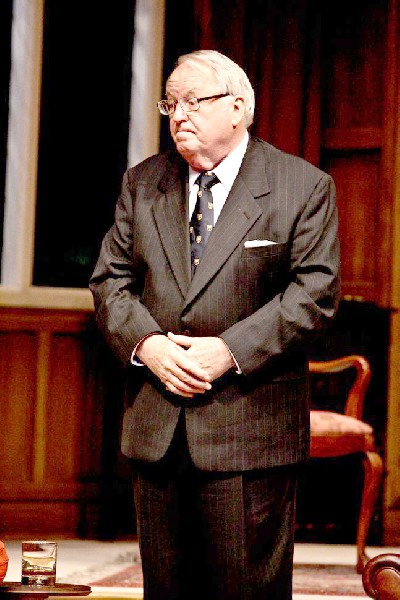 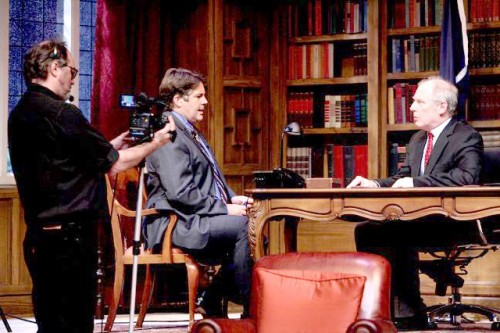 No one does a better job of poking fun at their political institutions and customs than the British themselves.  Too bad the Americans haven’t picked up that trait.  We’re too prickly-serious about our history, our customs, and our Second Amendment rights to have much of a sense of humor.  Where is the genius of Neil Simon’s comedy skill now that we desperately need it? Probably stuck in the gridlock of LA traffic and/or Washington, D.C.’s  “did not, did too fuzzy-headed partisanship positions”, I dare say.

But not to worry.  One can still enjoy the peccadilloes and “political-speak” of politicians, thanks to our English cousins and their non-political correctness stand, and not feel any guilt whatsoever.  All that is required is a theatre ticket to the comedy/satire production “Yes, Prime Minister”, at the Geffen Playhouse.

The west coast premiere, co-written by Antony Jay and Jonathan Lynn and directed by Lynn (two honest to goodness Brits and the original creators of the highly successful BBC TV comedy series “Yes Minister” of the 1980’s), have no fear of  “telling it like it is” when it comes to the darker and less ethical side of world politics.  Transparency?  Forget it!

These gentlemen are cut from the same loaf of English satire that gave the world the “Carry On” movie series of the 50’s and 60’s, the BBC’s famous radio series “The Goon Show”, followed by “Fawlty Towers”, and others.  Society need a good dose of humor, every now and then, to bring its power players back down to earth.

The story is set at Chequers, the official country residence of the Prime Minister.  It revolves around the clueless, but harried, out-of-touch Prime Minister Jim Hacker (Michael McKean) who finds himself in deep voter-confidence-trouble over the dreadful state of the English economy.  With an election coming up he’s looking to burnish his image in order to enhance his legacy.  When he hears about a possible 10 trillion Euroo infusion of cash into the British economy, courtesy of the country of Kumranistan, it sounds like his prayers have been answered.

There is, however, just one little catch.  The recently oil-rich, middle-eastern country requires the English government ditch its love affair with the “Pound” and join the European Union and its “Euro-based “, one currency economy.  In addition, the Kumranistani Ambassador (solidly played by Brian George) passes on a request from his Prime Minister for three prostitutes for an evening of Kumaristani revelry in the guest suite.  No Fling, No Bling … it’s time to huddle with his staff.

British comedy/spoofs are “verbally manic”, producing a controlled physical panic, and are a delight to watch.  In the case of “Yes, Prime Minister”, yes, it’s all a bit silly but that’s the fun of it.   Playwrights Jay and Lynn have infused their play with plenty of topical references, with which American audiences can identify, despite the characters being British.  For example “drones”, enhanced interrogation techniques, the CIA, and snide asides about former Italian Prime Minister Silvio Berlusconi and his sexual escapades and bunga bunga parties, hit their marks.  The antics are the same just the names have been changed to protect the misidentified (we do have libel laws in the USA, you know).

Understanding the British as a people and their culture can be difficult at times, however, once on their wavelength, their humor can be as hilarious and satisfying as anyone’s.  Who can forget the zaniness and manic comedy of  “Noises Off” or the comedy plays of the great Alan Ayckbourn?  The Brits love their language.  They love speeches with lots of words.  Vocabulary is used as a blistering weapon when it comes to their comedy.  Noel Coward was a genius of the verbal putdown, as was Kenneth Tynan when it came to written criticism.  Even though the dialogue zips along, it could still stand a bit of judicious trimming.  I still maintain that most playwrights should not direct their own plays.  After all, very few can indeed throw the baby out with the bathwater (Ayckbourn excluded).

The technical team led by director Lynn features a handsomely, spot-on scenic design by Englishman Simon Higlett, that is enhanced by the lighting design by Daniel Ionazzi.  The sound design by Andrea J. Cox needs, perhaps, to prep the audience with a little rain effect and a low rumble before jolting everyone out of their seats with that gigantic thunderclap and lightening effect.  If the moment had a point I’m afraid it missed me  (…just a suggestion).

An evening with ”Yes, Prime Minister” at LA’s Geffen Playhouse is a tonic to be enjoyed.  It’s a nicely performed, two hour, peek into the comedic and Machiavellian concentric circles of English politics.  It runs through July 14, 2013.

Resposted with permission of Jack Lyons and Desert Local News.