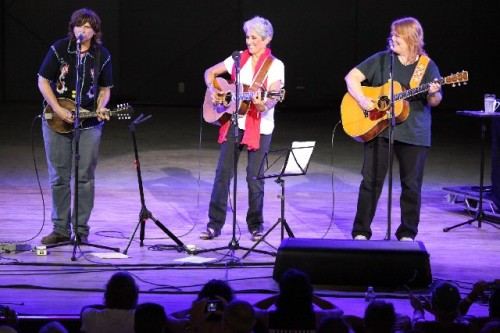 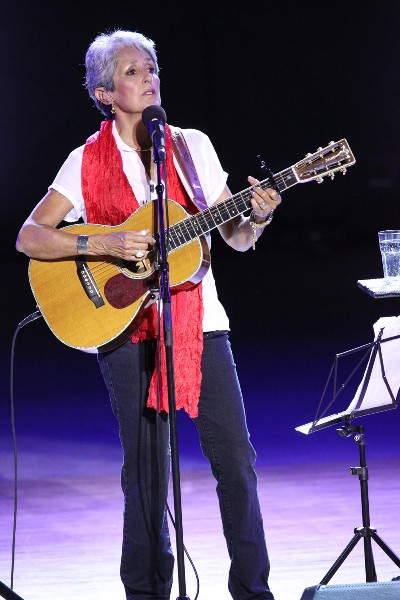 Baez demonstrated why she is the queen of folk music. 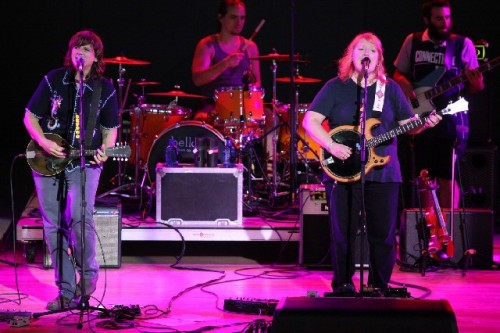 The Indigo Girls first started performing together in Georgia in 1985.

It was some fifty years ago when we first heard her with Bob at the legendary Club 47 in Cambridge. My friend Rachel Goldstein was an early fan. As a commuter I had that rare luxury of a car. I was prevailed upon to ferry Rachel and friends on those visits from Waltham to hear her.

There was a sparse audience on a quiet night. Joan, bare footed, was chatting intently with her boyfriend. Casually, she got up to deliver a set that displayed the most spectacular pipes of her generation.

Midway through the performance she asked us to welcome her friend Bob who sang solo and also joined her for duets that still ring in my memory decades later.

Arguably, her first real fan base was Brandeis University. It had a folk group with lead singer, Judy Shapiro, who was later president of Barnard College of Columbia University. They played at a club across the tracks from BU called the Golden Vanity. It was a vast space now home to a movie theatre. Joan now and then joined them and they were close friends.

The dorm of a lounge in North Quad was packed when she sang to an attentive and simpatico audience. Many shared her activist views expressed by old commie songs and political patter between selections.

She rode to the gig on the back of a Vespa scooter all the way from Cambridge. Her father was a professor at MIT and Joan was a keystone of the Harvard Square folk movement.

During a recent reunion a classmate, recalling that memorable, intimate concert, reminded me that she was paid a meager $18 for the gig.

Presumably, a lot more to appear yesterday at Tanglewood with the popular Indigo Girls (Amy Ray and Emily Saliers). It was a mellow event drawing some 7,000 or roughly half of the crowd the night before during a Pops tribute to Jerry Garcia that attracted a plethora of Deadheads. On the lawn there were clusters of folks seeking shade under the trees.

Opening the concert the Indigo Girls, who started performing in Georgia in 1985, and cut their first album in 1987, delivered a powerful and raucous set. Avowed lesbians, but not partners they, like Baez, they are activists. They appeared to draw upon a large fan base which often sang along and cheered for familiar hits.

An indication of the activism they share with Baez was the use of two individuals alternating signing for the hearing impaired in the audience. It is rare to see this at concerts.

They announced that Tanglewood was the last gig of their current tour with Baez. They performed at Tanglewood with her in 1990. At the end of a supercharged, hour long set they said that later they would be joining Baez.

Some have the ability, like Baez, to age gracefully. Now a senior citizen she is lithe and graceful. Her once long black hair is now closely cropped and silver toned. She was casually elegant in black pants, a loose white blouse and for color a long, summery, bright red scarf.

No, the pipes are not what they once were. There wasn’t that spectacular upper register range that sent goose bumps up your spine. But her vocal ability is still in top form. What she may have lost technically Baez more than makes up for with the dignity of time and life experience which she invests into meticulous interpretations.

As we were leaving the concert, I lost my composure talking with Astrid about how deeply moved I was by her rendering of “The Boxer” by Simon and Garfunkel. I’m getting chills right now just thinking about it. That powerful, poignant song about a fighter and his struggles with a hard life in a tough town just punched me in the guts.

Now, perhaps mellowed with age, she delivered a concert at Tanglewood. It was all about the gorgeous music with no asides of current events and politics. Although surely there is a lot of cause for concern. That surprised me as did the dirty joke about two Southern ladies with appropriate accents.

While the occasion was short on agit-prop it was replete with poignant observations about the passages of time and challenges of life.

During her travel to the Berkshires she performed the night before at the site of Woodstock in Bethel, New York. She discussed the superb museum which includes material about the protest years and not just a focus on the rock bands and gonzo host Wavy Gravy. She performed some of the songs she sang at the historic rock festival.

Noting that she was pregnant at the time she introduced “My boy, Gabe Harris.” He plays a variety of percussion instruments touring with his mom.

Opening the set she announced that she would perform folk music and thanked “Any Indigo Girls fans who stayed to hear me.”

It was a stunning change of pace as we scaled down and laid back to get in sync with her understated delivery.

She opened with her arrangement of “Lily of the West.”

Covering Bob Dylan, still in her heart if not her life, she delivered “It’s All Over Now Baby Blue.” The audience howled when she tossed in a mimic of his signature style.

From the repertoire of union activist songs she performed “Joe Hill” from her album One Day at a Time.

The lyrics today, when Americans are under attack from a government ever more in support of the conservative, freedom eroding right rings true.

She recalled her friend country singer and rebel Johnny Cash. He was “a gorgeous rascal” she stated introducing the classic “Long Black Veil.”

Followed by another Steven, this time Foster, with the traditional 19th century ballad ‘Hard Times Come Again No More.”

Revealing her personal life she described asking her mom “What do you want for your  100th birthday?”  The surprising answer was “To drop dead.” She got her wish as Baez recounted her recent birthday on April 11 followed by passing on April 13.

Dedicated to the memory of her mother she delivered the heart wrenching gospel song “Swing Low Sweet Chariot.”

Introducing her multi-instrument accompanist, Dirk Powell, she revealed that she learned a mountain song from him. They delivered a duet of “Give Me Corn Bread When I’m Hungry and Whiskey When I’m Done.” She broke out in a brief passage of step dancing before they connected for the two step.

Everyone does “House of the Rising Sun” but Baez made us feel like we were hearing it for the first time.

She led the audience through a sing along of John Lennon’s poignant “Imagine” with Powell at the keyboard. She spoke then sang the lines prompting our participation. That was followed by “The Boxer.”  I was totally blown away.

Baez had been on stage for an hour and brought on the Indigo Girls for another  25 minutes including two rounds of encores.

The trio started with her 1975 composition “Diamonds and Rust” which earned a well deserved standing ovation.

In the ensuing exuberance fans rushed the aisles and swarmed in front the stage. The excitement and energy blew the roof off the Shed.

They just sailed through "The Night They Drove Old Dixie Down" “Don’t Think Twice” and “The Water is Wide.”

After an encore they departed but the audience insisted on more.

Surprised and enjoying the warm reception Baez and the Indigo Girls returned for one more.

Saving the best for last they closed with a single tune, Dylan's  “Blowin’ in the Wind.”

Cripes, here I go getting all choked up just remembering. A la recherche du temps perdu.