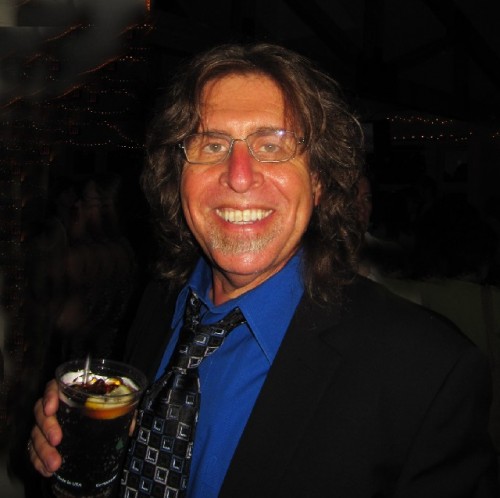 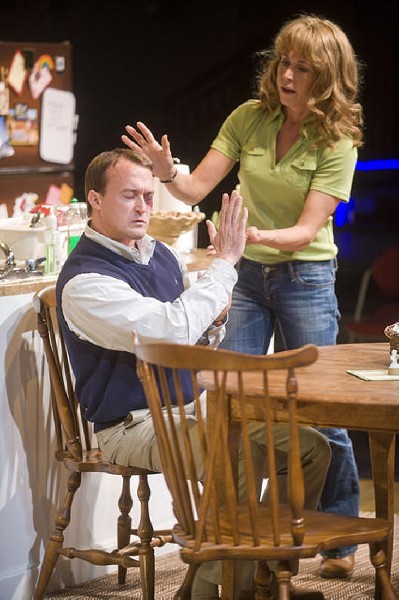 Joellen has popped a shiner on her estranged husband Gene. (Kevin Sprague photos). 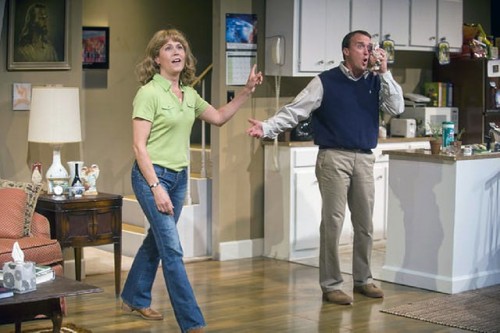 Domestic violence and spousal abuse in a home where God lives. 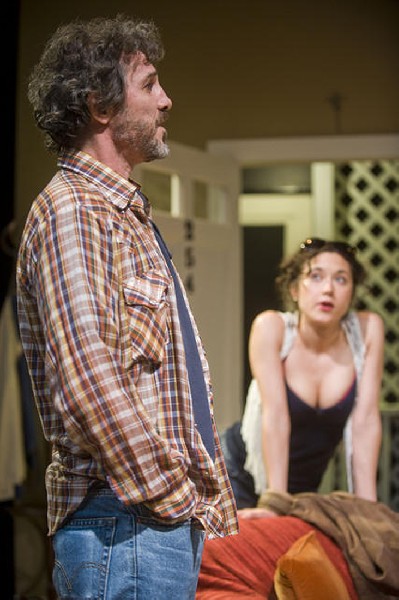 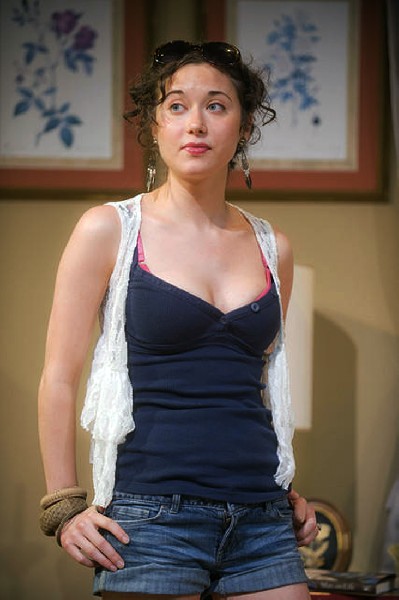 Susie (Kate Abbruzzese) may be a bimbo but she has a razor sharp tongue. 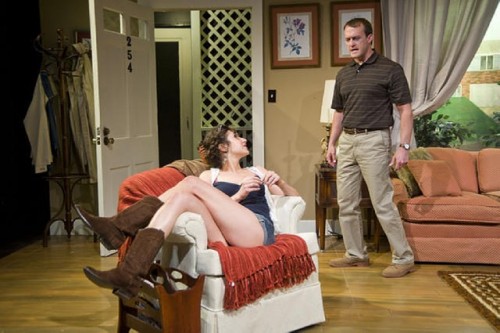 Susie kicks back on the couch. 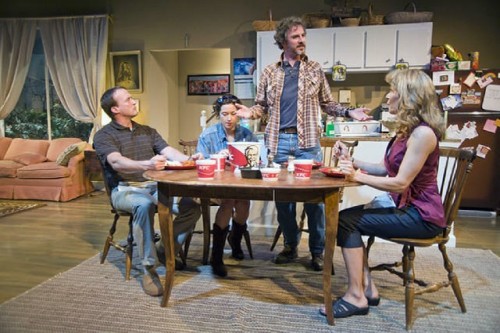 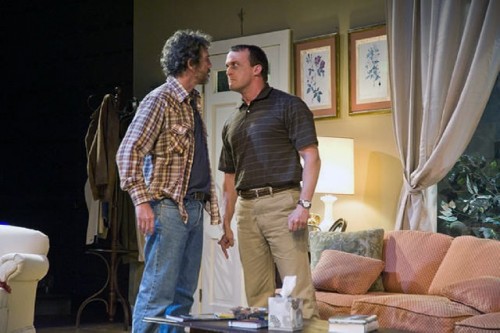 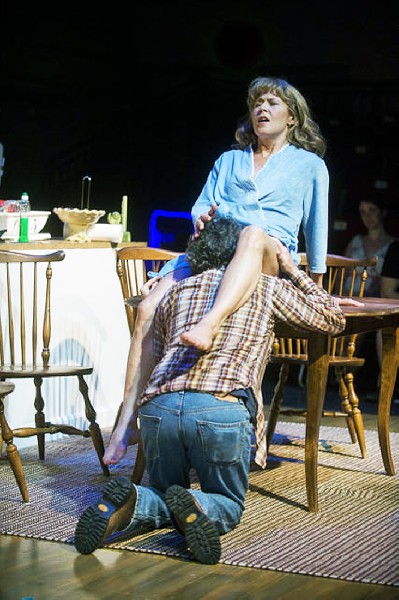 Before servicing his sister-in-law Ronnie puts on his reading glasses.

Parasite Drag by Mark Roberts, which opened last night at Shakespeare & Company, is the most powerful fucking new play which we have seen in a fucking long time.

If that strong language and explicit sex on stage offends then this play is not for you.

It takes guts, stamina and a strong stomach to sit through a harrowing, insightful, richly rewarding, and truly remarkable evening of great theatre.

The volcanic and galvanic Ronnie, played with staggering, white hot intensity by Jason Asprey, can’t seem to utter a sentence not punctuated with the F word. It’s F’n this and F’n that.

While rough and raw it is hardly gratuitous. The harsh language melds with his explosive persona and creates a compelling contrast with his pious, meek, seemingly soulless and gutless, soon to be ordained brother Gene (Josh Aaron McCabe).

Compared to the Molotov Cocktail performance of Asprey that of McCabe is subdued, pious, and unassuming to a fault. Until the stunning reversal of the second act strips him emotionally bare in what may well be the most difficult and demanding of the four roles brilliantly directed by Stephen Rothman.

The brothers have been estranged for years. We learn why in the devastating dénouement of act two. Ronnie and his white trash, gum chewing, tarty, Kentucky bride Susie (Kate Abbruzzese) have returned to the arid family home where God lives to join the death watch of their sister.

The four actors play off of each other with the precision of a Swiss watch or knife. While we appreciate the nuance, challenges and quality of their individual performances it's as an ensemble that they truly triumph. With perfect casting and synchronicity the whole is greater than the sum of its parts.

Of course this stunning production hinges on the scorched earth script by Mark Roberts. This is one instance where publicists definitely should have provided reviewers with copies of the script. The text is so fertile with one liners, insights, razor sharp reversals, and revelations that it must be a joy for actors to sink their teeth into.

The script evokes the intensity of Edward Albee’ Who’s Afraid of Virginia Wolf. While the demands that Rothman makes of the actors, particularly Aspenlieder, bear comparison to Bertolucci’s Last Tango in Paris.

During a scene fueled by pot smoking Joellen demands sex, willing to do anything, from her brother-in-law and former lover. While his bride is sleeping upstairs Ronnie relents and agrees to “go down” on her. Played graphically. But first, in the most hilarious moment of the evening, he puts on his glasses.

The humor of the play, outrageously, results from the tightly wound dramatic tension. We really need those laughs to survive such a tough and demanding evening.

To borrow an analogy from sports by the end of the play these four actors leave it all on the stage. They will have to plunge into that heart of darkness- in repertory with Cassandra Speaks and The Tale of the Allergists Wife- through early September. If they stay ‘in character’ it’s going to be a tough summer.

The cycle of plays follows the theme of Rebellion, Revolution, 35 Years. This is amazing stuff. With a new Lear tonight.

Last night artistic director Tony Simotes informed the audience that last year S&Co. earned $1.3 million at the box office. This year advance sales are 40% ahead of last year. Given such superb and adventurous programming it is easy to see why. The season features Olympia Dukakis and a new play Satchmo at the Waldorf, the first by drama critic Terry Teachout, starring a stalwart of the company John Douglas Thompson.

It is also encouraging to see S&Co. putting hard earned resources into improving the quality of productions. Instead of the usual, cost effective, ‘bare pipes’ there is a terrific, fully built out set, aptly designed by Partick Brennan. It appropriately conveys the sterile environment of a pious home. Overall the production values are spot on.

While Parasite Drag unravels a gruesome saga of family tragedy there are truly hilarious moments. Initially Susie, with lots of exposed bosom and a jeans mini skirt, is presented as a bimbo. She proves to have a sharp tongue. Her comic timing, particularly in scenes with Aspenlieder, is ferocious. She strikes like a cobra sparring with Aspenlieder’s mongoose.

Going through a family album it is revealed that Joellen not only knew Ronnie in high school she blurts out that she “still has a crush on him.” And how, as we learned previously. But Susie is not worried about Ronnie. It’s just sex and “don’t mean nothing… Men. They just like to wander off the road and see how muddy they can get their shoes.”

Weaving through the conflict is the sister, wasted with AIDS as an IV drug addict, now skeletal with ‘skin like parchment.’ There are arguments about how she got this way. Or what has been done for her with an endless cycle of rehab and relapse. It is an all too familiar family saga.

The play hinges on why. Years ago following a family incident Ronnie left home. In essence he abandoned his younger brother to circumstances that resulted in a lifetime of denial and salvation through Jesus. Ronnie is also deeply damaged. But he has found a wonderful loving family through Susie.

Suffice it to say that Ronnie abandoned his brother and is about to do it again by leaving before the funeral. It’s not pretty but Ronnie explains it as Parasite Drag.

By all means see this play. An hour before the curtain, however, take a Valium. You’re going to need it.