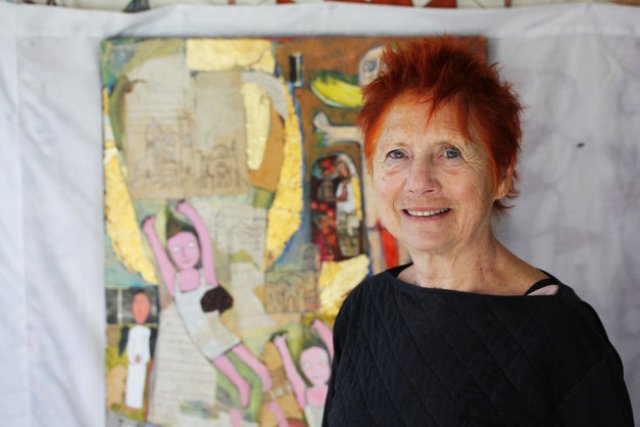 Erika Marquardt, photo credit publisher of 'Memories of a War to Come.' Other photos by A. Hiemer, unless otherwise indicated. 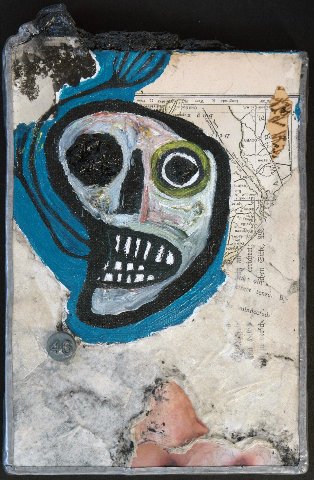 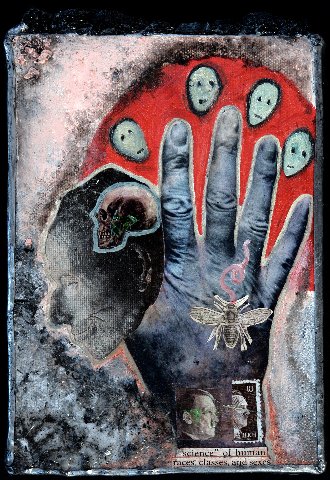 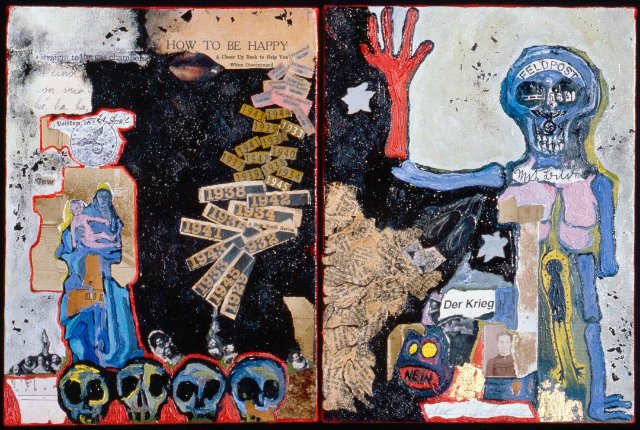 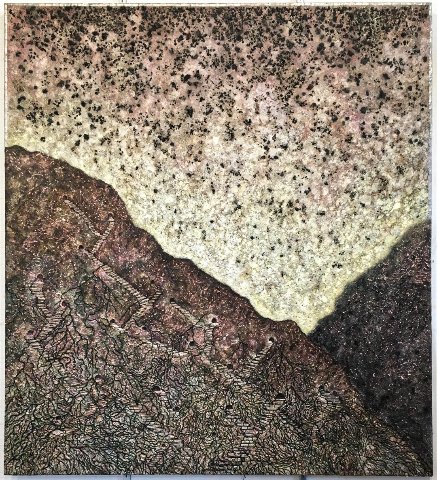 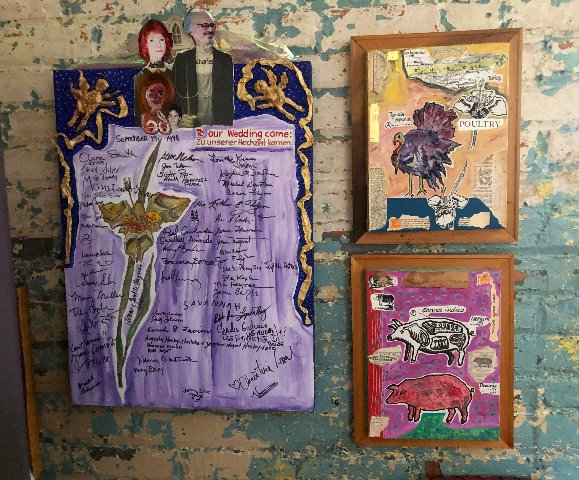 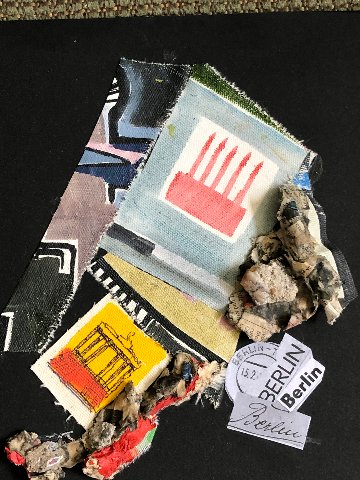 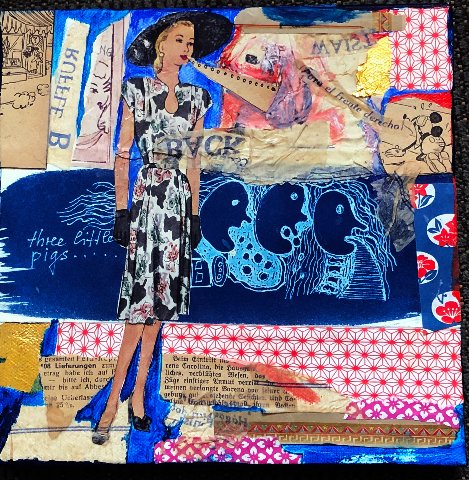 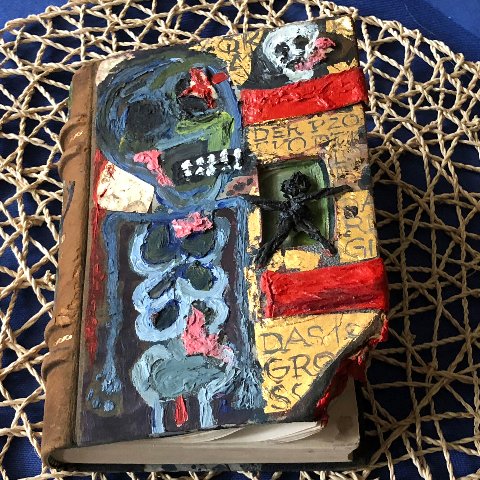 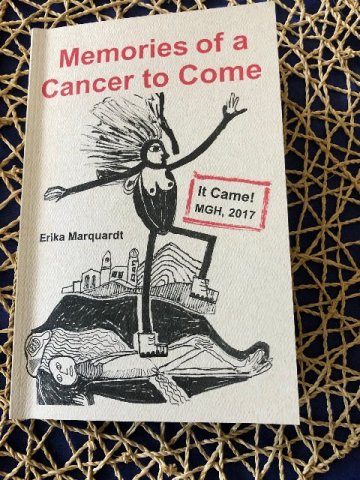 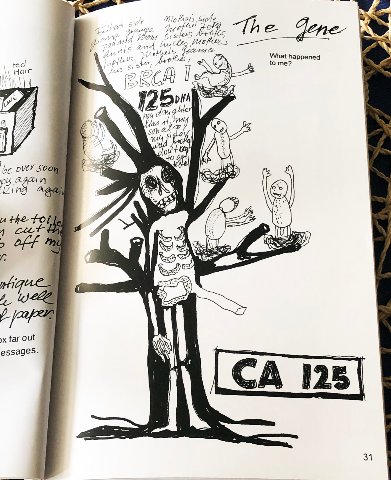 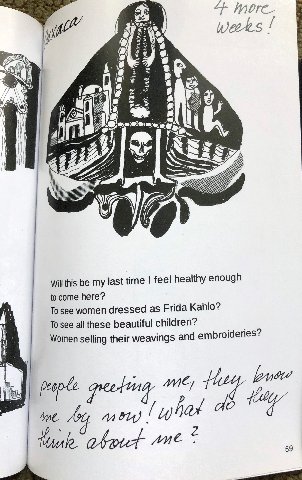 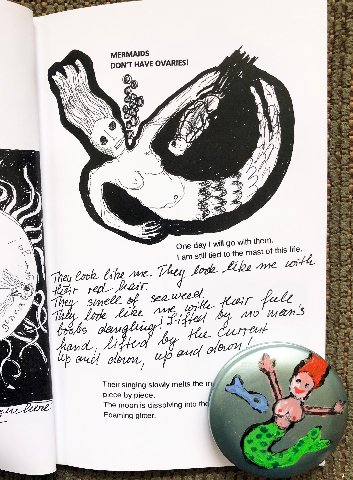 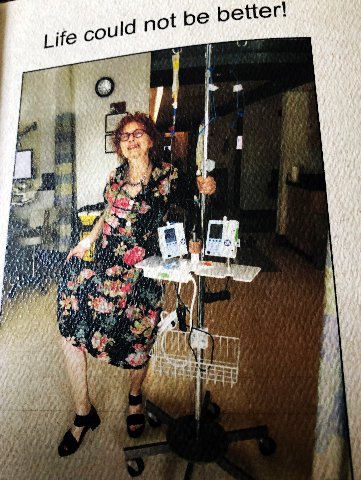 'Life could not be better!' Back cover. 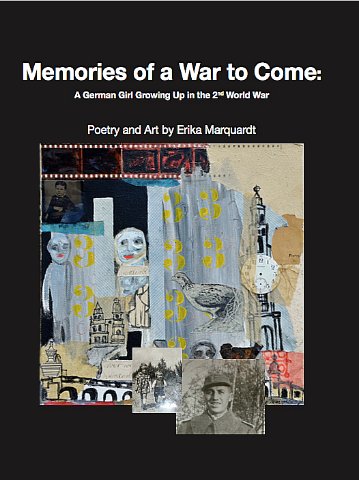 Cover: 'Memories of a War to Come.' 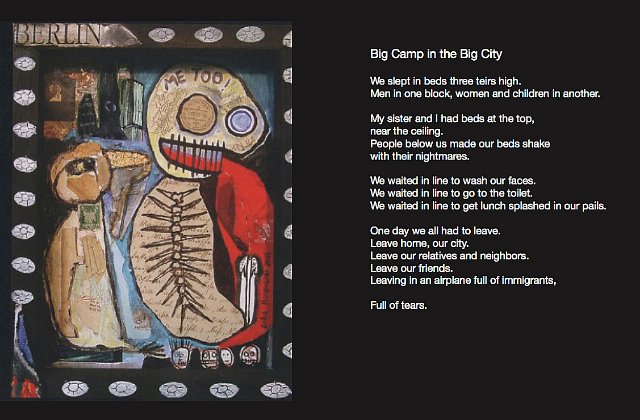 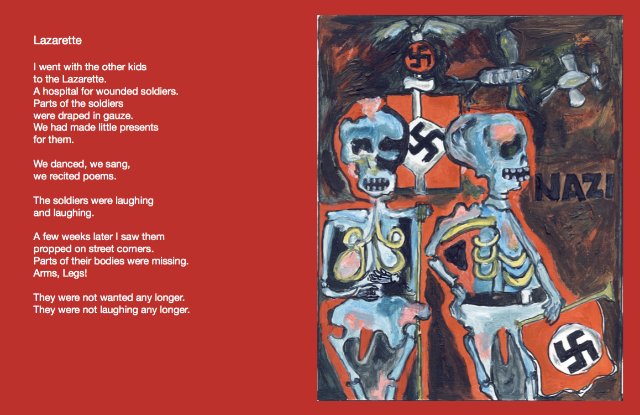 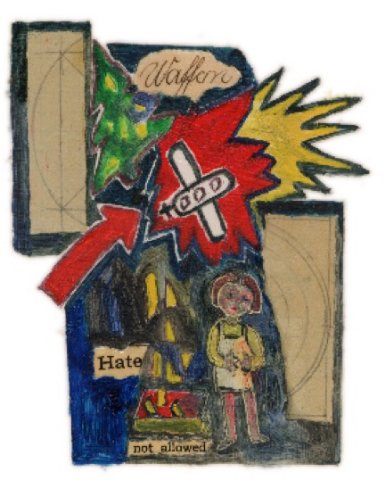 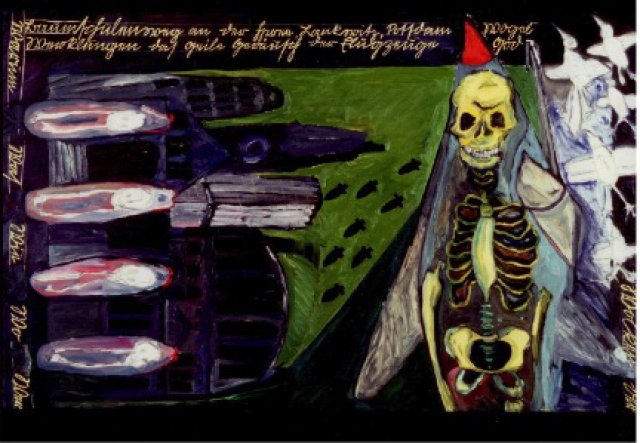 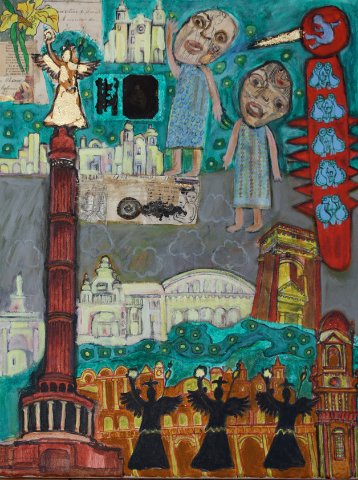 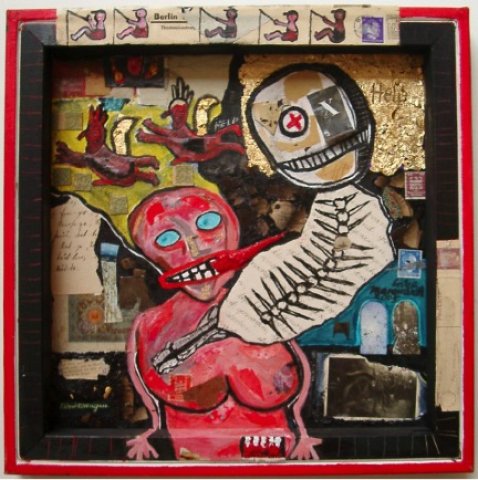 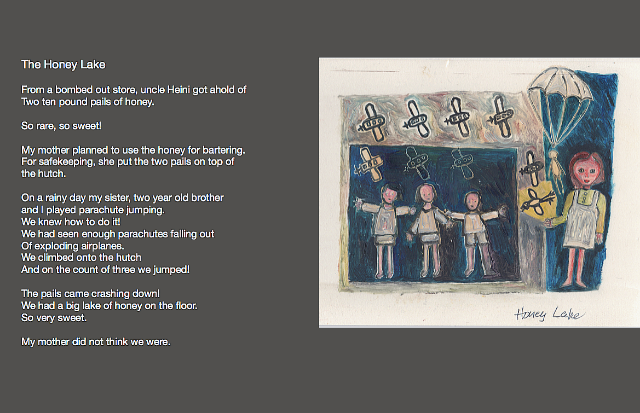 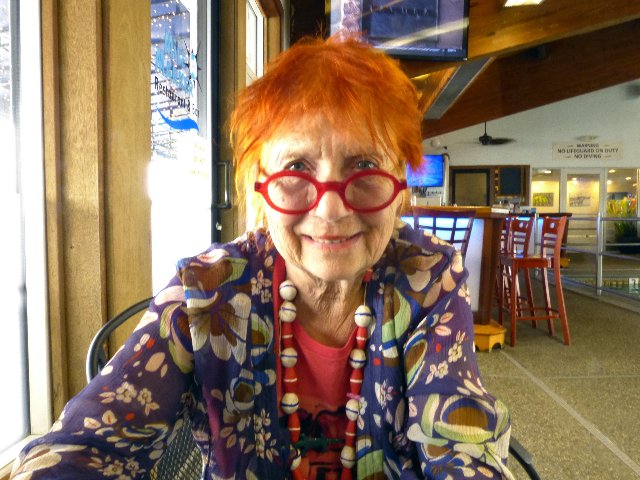 The last photo I took of Erika, before the Pandemic. 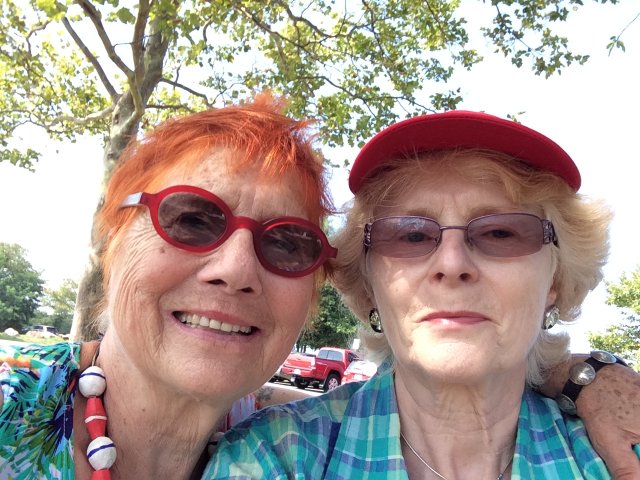 Erika and Astrid, before the Pandemic.

Erika Marquardt was actually the last person here in the US with whom I could ‘quatschen in German.’ I miss my friend profoundly. Erika continued to speak like a Berliner in English, even after she had lived for more than 50 years in North America - first in Canada, and later in the USA. Her accent never lost the Berliner edge for me! She was a few years older and was deeply formed by her WWII experiences and upbringing in East Berlin; later the family escaped to West Germany.  Via her paintings she spent decades expressing and working through her early childhood experiences and traumas, perhaps even until she stopped painting. She was an autodidact, working in a blunt German expressionistic style.

We were three couples, still friends to today, who in 1995 exhibited paintings and presented writings covering the subject: The Aftermath of War in East Boston's Maverick Arts Gallery. Later, Susan Erony and Erika set out to make 1000 shared small paintings, each beginning and/or completing a canvas. That project, Have We Gone Too Far, commemorated the end and horrors of the declared German ‘1000 Year Reich.’ Those macabre or strongly expressive and very thoughtful works were actually exhibited over many years in the US, Germany, Austria and Italy in various configurations and they still deserve to find a final long-term exhibition space.

The collaboration lasted from 1998 to 2006. Erony expressed recently: "Yes, I framed every one of the 1000 pieces with lead and charcoal ( 7"x10"). And the hand is indeed mine, as well as the head in that piece. In fact, a lot of that piece is, but Erika’s work is often dominant, indeed. She was much more comfortable painting over my work than I was hers, as well. But really, we each did about half. Interestingly, at least to me, was that it became harder to tell our contributions apart and we unconsciously were influenced by the other." (See photos)

Erony’s solo paintings and some of the collaborative pieces can be seen at the Matthew Swift Gallery in Gloucester, MA, and Marquardt’s art work is available at Paula Estey’s Studio in Newburyport, MA.

Both artists are and were dedicated advocates to uncover and speak about Nazi atrocities and the Holocaust during those years in presentations and panel discussions including, on occasion, Jewish Holocaust survivors here in the US and in Europe.

Of course, Erika also painted more lighthearted subjects. As such, she prepared a canvas for our wedding and Olivia Smith, my daughter, collected signatures of all invited guests at the wedding. We still exhibit that canvas with a couple other small pieces by her in our loft. Her imagination was immense, her expressions dramatic and traumatic as well as youthful at times. (See above photo series)

Erika, gregarious and, perhaps a bit high-strung, would light-up and crack-up any room. A clothing style all her own was always complimented by her wild or spiky red hair. (In fact, we were both read heads!) Berlin drew her back time and again over the years, so that she could visit the city and her close friends. She also befriended my cousin Horst Hiemer and wife Bettina Hiemer in Berlin. One summer, we all spent time in New Hampshire together.

In 2010 Charles Giuliano and I curated an exhibition at the Eclipse Mill Gallery, North Adams, MA, of artist books, which was titled Illustrious. Among the 14 participants I showed Erika’s ‘Goethe Wilhelm Meister,’ front and back painted in Erika’s typical style with a couple of skulls, a small black figure recessed in the cover with blood-red bands holding the book together. (See photo) Here, she altered an antiquarian book, but would publish her own books in later years. We also showed her painting ‘What Did Your Father Do During the War?’

Like other dear women-friends cancer marred her life for many years and in 2017 she published Memories of a Cancer to Come. It is a book of black and white drawings, poetry and notations. She titled pages such as: “My new Cancer, The Gene – CA 125, Mermaids Don’t Have Ovaries.” And so, she wrote and drew images about her hard truths and that of her family as it relates to cancer.

She had spent several winters in Oaxaca, Mexico, and muses: ‘Will this be my last time I feel healthy enough to come here?   To see women dressed as Frida Kahlo?  To see all these beautiful children? Women selling their weavings and embroideries? (See photos)

Yes, it was the last time that she lived there in Oaxaca!

However, Erika’s first book in 2015 was published in color by Zhana Levitsky, director of Zeitgeist Gallery in Beverly, Massachusetts. The title, Memories of a War to Come: A German Girl Growing Up in the 2nd World War is a warning for what’s to see and read: “Deep and dark poems on pages that are also splattered with images of her collages. Paintings that are raw, filled with skeletons and sculls, or bodies floating to earth, still connected to parachutes.   Death is dancing everywhere…. Blackbirds, then white doves are not white or symbols of peace in these paintings. Or poems, none longer than a page, so they say little and everything."

"Some are titled: ’Liberation, the Little Princess, Raspberries, My Father’s Friend, New Clothes, The Pill and Candy.’ Don’t trust the benign titles! Her truth and memories will hit you hard in your gut! And the images drawn by a self-taught painter add impact, and assault your senses. They assault mine!" (Excerpt from my review for Berkshire Fine Arts of December 1, 2015)

Finally, Gregory Maguire (novelist, 'Wicked: The Life and Times of the Wicked Witch of the West,' and more) wrote about Erika’s work: “The artwork is raw and accomplished at once, the stuff of real life. The poetry seems to compliment the strength of the artwork beautifully by being a bit more formal in some ways, a bit reticent in others. It is hard for me to imagine how this good hard work will be welcomed in the world. I hope fulsomely as it is welcomed here! I am honored to have a copy.”

Her four adult children and families are inviting all to a 2 pm Memorial Celebration, on September 18, at the Unitarian Universalist Church in Newburyport, Massachusetts.

Erika, you will live on in your work and memories of all who knew you and love(d) you!