Ripped from the Headlines Play by Zayd Dohrn 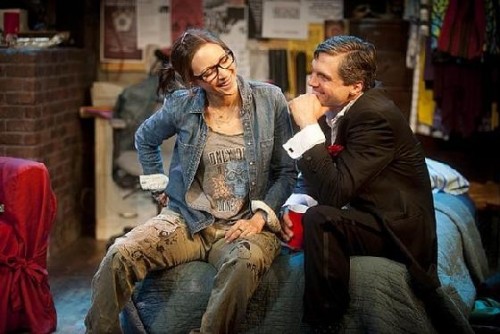 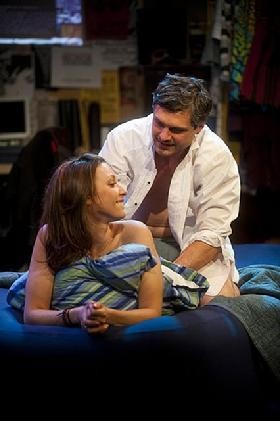 The new play Muckrakers by Zayd Dohrn aspires to be fresh, controversial, relevant and ripped from the headlines. It unfolds in 80 minutes of real time.

Americans are numbed by a steady stream of state secrets leaked to the media followed by a scramble of administration cover-ups and desperate spin. The constant denials and affirmation of the privacy of citizens by President Obama erode his credibility and result in sliding approval ratings.

Sitting in a dentist chair, the other day on CNN, I caught glimpses of NSA hearings that confirmed that, yes, our phone calls and e mails are routinely monitored. And yes it’s true that surveillance drones are spying on us but, reassuringly, not that often.

If you believe that then you’re a bigger fool than I am. As the lyrics of the Police song state with far too much relevance ‘Every move you make, I’ll be watching you.’

There is a national debate about security in the face of terrorism, with some 50 attacks thwarted because of hands off legislation and compliant judges, as well as real concerns about privacy in a Big Brother society.

If government spies on us, as this topical and provocative play suggests, we have the right to spy on them and out their secrets. The hackers and whistle blowers are conflated, as patriots and defenders of our personal freedom with the right fully to be informed, and dirty rotten traitors.

We live in a different and more complex world than the era of HUAC and McCarthyism when Julius and Ethel Rosenberg were fried for revealing atomic secrets to the Soviets.

So far none of the latest crop of spies and bloggers have gotten the hot seat. Daniel Ellsberg who released The Pentagon Papers is still at large.

Or hit the global lecture circuit while managing to stay one step ahead of black ops assassination, or capture and waterboarding.

Stephen is spending the night before continuing his speaking tour to Berlin in the grungy Brooklyn apartment (shabbily designed clutter by Brian Prather) with Kate Rogal (Mira) a member of a blog The Dorga Project which sponsored the lecture but can’t afford to spring for a hotel.

That’s just an excuse. Mira is a black widow spider luring a high value news source into her web. In order to stay a step ahead of arrest and torture he threatens to reveal more damaging secrets. If anything happens to him that information, with devastating impact to multiple governments and agencies, will trigger multi national postings. That is “insurance” as he pursues the lecture circuit under constant surveillance.

As a self described anarchist, economic socialist, and cultural dadist Mira believes in total transparency and is determined to out him through subterfuge.

A sophisticated celebrity in his 40s Stephen cannot hold back his condescension for her twentysomething aspirations as a journalist.  She is that most lethal of creatures a true believer. Apparently, she exposed her own father, a congressman, and in her mind, a dangerous hypocrite. He disses her for espousing the views of her generation.

She quotes Montaigne from the essays. As an over educated, know it all Brit, he doesn’t read the French “too abstruse.”

“It’s really about visibility. About how people should act the same in public as they do in their private lives- expose themselves in their most intimate moments. To publicize their behavior. Because only with other people watching are we reminded of our better selves. Held to a higher standard of accountability. And this was written four hundred years ago! So it’s not ‘my generation,’ thank you very much. Montaigne says a good man should build his home out of glass. Totally transparent. So his neighbors can see into every room. Let them observe the most intimate details of his private life.”

He objects. Aren’t the bathroom and bedroom off limits? He doesn’t give a fig if Churchill buggered boys as long as he stopped Hitler. Do we reduce Clinton’s accomplishments to getting a BJ from Monica? Who cares?

“The point is, that kind of—visibility is the beginning of morality, Stephen. To recognize that your private behavior might be observed? By others. Who could make you feel pride—or shame in the rightness or wrongness of your actions…To live every day, every hour, as if you’re in public…Visibility makes our actions meaningful. Having no distinction between who we are and how we present ourselves? It’s an ideal” she says.

His response “It’s an impossibility.”

The essential thrust of Montaigne is her strategy to out him for posing to be homosexual to stalk a source and exploit feigned compassion. It was a deception intended to extract classified information. When revealed it resulted in real political and social change as well as his personal fame and fortune. His argument is for his own privacy which questionable actions deny in her view.

As her agenda from casual host with a crash pad, to aspiring muckraker, is revealed he ridicules her methods. “I don’t fuck my sources” he says sharply. They had frantic sex with his premature and embarrassing ejaculation after the “best 15 seconds of your life.”

Her retort “No, you’re more of a cock tease.”

Then in the ultimate denouement he hangs himself not anticipating her journalistic coup of video-caming their sexual encounter and her scathing questions. He misrepresented himself as homosexual to play a source. “My first loyalty is not to my source (Private Stanton who we learn has again attempted suicide). My first loyalty is to the truth.”

As Malcolm X stated “By any means necessary.”

The problem is that for all of its provocative and timely content, for me, this did not add up to a compelling evening of theatre.

The persona, performance and casting of Stephen were all wrong.  He was way too full of himself, archly superior, annoyingly even mockingly British. Haven’t the educated ones always looked down on us?

A tall, gangly man the director, Giovanna Sardelli, has him flopping about in a tuxedo with sneakers while downing first a bottle of champagne and then demanding more booze. He winces when offered a tumbler of Jack Daniels which he mocks as “Jackie D.” As with all of his ersatz British humor it’s more sharp and witty than funny. Like all those Benny Hill skits we just don’t get.

Sloshing down all that booze while on the lam Stephen imprudently fails to keep his wits about him. But Sardelli does not allow even a hint of intoxication or the motive behind it.

We do, however, see his justifiable paranoia as he sweeps the pad for bugs. He frisks her and even insists that she keep the door open while taking a pee. Why has Dohrn written him as a Peeping Tom? How does that advance his character and the plot?

It was impossible to believe in his character beyond smarmy, self serving pursuit of fame. Can one image Julian Assange popping off bottles of champagne and shagging groupies? I think not. Well, perhaps actually. There have been accusations by two women but are they a setup? We assume that Assange and others of his ilk have more depth of character and complex motivations than the blundering and bungling bounder Stephen. He is such an unsympathetic, arrogant character that he deserves to be outed and taken down by the ardent, one dimensional, ideologue Mira.

Who, by the way, is more convincing and compelling in her role. We tend to believe in her misdirected anarchy and idealism. I knew too many like her during the radical 1960s. Mostly they were a bore intent on sabotage and terrorism while quoting from Mao’s Little Red Book. But Stephen, a self serving hypocrite, is worse.

While an utter drag Mira is true to her narrow vision and its anarchist mandate. Antipathy for the characters is the primary reason why this play founders on the rocks in a storm of current events. I just never believed in Stephen. He’s more Larry Flynt than Mike Wallace. Top level journalists/ muckrakers just don’t function like Stephen. There is discipline and professionalism that he utterly lacks

The jury is still out for the more complex, opaque Assange and his ilk.

And no, I’m not ready for Montaigne’s visibility. I don’t want to live in a glass house and surely don’t demand it in others. Even presidents are entitled to an occasional BJ from an intern after a hard day defending truth, justice and the American way.

Perhaps Stephen is right. The French are indeed too abstruse.