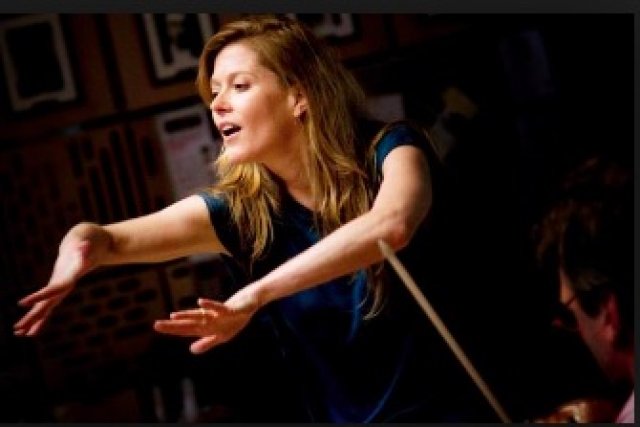 As a conductor, Barbara Hannigan is full of physical energy and a dynamic beat. Listening to her sing and conduct feels intimate, intuitive, and collaborative. Bowled over by Hannigan’s deep musicality, her sense of the proper degree of vibrato is often overlooked.  She has just the right amount of delicate breath in each note, giving the slightest hint of texture to a smooth and pure line. One’s sense of this may be a matter of taste, but the style suits the music she chooses to sing.

How does she work as a conductor when she is also singing? She actually changes position when she moves from one role to the other.  She faces the audience when she sings and turns to the instrumentalists and singers when she is only conducting.  She is an electrifying presence.  Rather than making a case for the music she conducts, she invites and immerses.

At some Ojai performances, Hannigan performed a hat trick. She programmed the evening, sang and conducted. One evening, she sang Arnold Schoenberg’s String Quartet No. 2 with the Jack Quartet and, in the second half of the program, she conducted Schoenberg, and Claude Vivier, an underrated composer who died early and who she has championed.

Schoenberg wrote the second String Quartet after his wife Mathilde had left him for a neighbor, expressionist painter Richard Gerstl.  When Mathilde returned to Schoenberg (at Anton Webern’s suggestion), Gerstl killed himself. The tone of the Quartet is one of anguish, sorrow and horror.

Written later than the Verklarte Nacht, the Quartet was given a stunning performance by The Jack Quartet with Hannigan joining in to sing the two poems of Stephan George that Schoenberg had included. They come from a large poem George wrote after the sudden death of a beautiful sixteen year old boy on whom he was fixated.

The JACK Quartet bridged the classical world and the new one.  They can clearly negotiate any style of music, although they are known for their riveting takes on the compositions from the contemporary canon. Yearning lines and deep dark chords compel the ear to attend in the Quartet, which has four movements.

The first movement is gorgeous and conventionally romantic. In the second movement JACK tears apart a folk song as the music disintegrates, ending on a repeated four note figure centered on the devil’s tritone. Chords dissolve into intervals.

As Hannigan joined JACK in the third and fourth movements we heard sinister streams of notes.  JACK becomes other-worldly, with tones sometimes muted and sometimes bowed harshly near the bridge of the string instruments.  One of Hannigan’s specialties is highlighted, that ability to go from whisper to cry, searing us seemingly without effort.

The end of the work is transformational.  Suddenly JACK is giving us a steady beat in the bass and Hannigan is singing with, as the text words say, dissolving tones, fire sparkling and a holy voice that roars.

Verklarte Nacht is so beautiful that it led Schoenberg to the door of a Hollywood producer who begged him to write a score for the Good Earth.  Nothing came of this meeting, because Schoenberg insisted that he have control of the actors spoken words so that they would integrate with his music.  Hannigan too is interested in spoken sounds as well as sung ones, and would experiment wildly in a John Zorn work, the hardest she had ever undertaken.  With Hannigan, that is saying something.  She is brave and daring as she takes on the difficult.

In Verklarte, the stability  of the ending is an illusion of returning order, because its very steadiness is weird after all the music that has gone before. The immediate past is still echoing in our ears. We are entranced.

Hannigan performances often end in silence to give the audience a chance to come back to the world of now and rejuvenate.