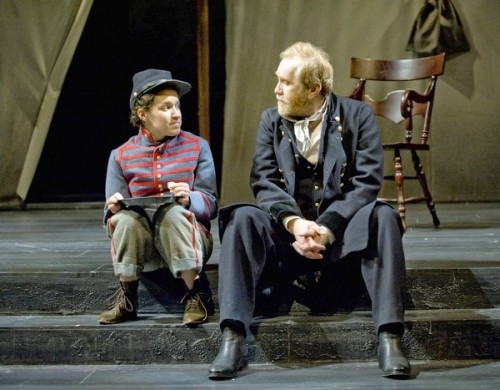 The General and the drummer "boy." 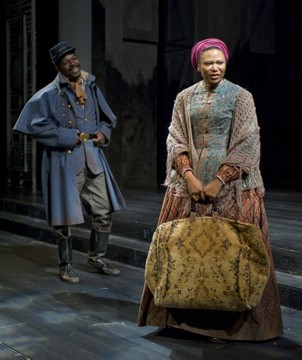 The emancipated slaves Wilma and Coalhouse Walker contemplate a life together. 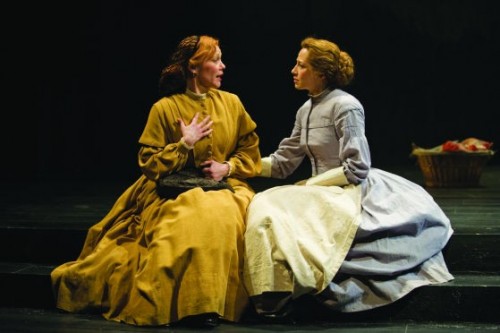 In its current form The March, adapted and directed by the renowned Frank Galati from the novel by E. L. Doctorow for the Steppenwolf Theatre Company in Chicago, is not ready for prime time. Without drastic revisions the two and a half hour production with an enormous cast and a Spartan set will, like the many victims portrayed be laid to rest with a decent funeral.

There are too many layers and filters from the infamous event during the Civil War, through the literature of Doctorow’s novel, and the attempt to frame this into a satisfying experience of theatre.

Destroying all in his path, ripping up railroad lines, burning plantations and crops, torching warehouses of cotton, liberating slaves and landowners alike cast adrift in his bloody wake, General William Tecumseh Sherman, broke the back of the Confederacy in its heartland through a March to the Sea. Ending at Savannah, Georgia which surrendered and was spared.

Depending upon your point of view Sherman was either a hero, who hastened the end of the Civil War, or a heartless monster and war criminal.

In this improbably revisionist, feel good play he is “humanized” and rendered “complex” by conflating the disparate aspects of hero and villain.

When, that is, Sherman (performed on the night we attended, the last of the run, by understudy Patrick Clear) actually appears on stage. Without knowing Harry Groener's performance that of Clear was compelling and satisfatory.

There are so many subplots of varying degrees of interest and effectiveness that we don’t actually have that much face time with the general. We catch a glimpse of his tragic family life and loss of two children. When a Confederate General looses a son of the same first name in battle Sherman dictates a compelling, gracious and sincere note of condolence to an “enemy.”

More difficult to grasp is his refusal to enlist former male slaves into his army, as other generals had done. Or to provide for the ever growing number of camp followers made homeless and destitute by his scorched earth policy. It was an effective military strategy but Sherman was callous to the consequences.

There is a curious aside on this as he declared a swatch along the coast, including the remote Georgia Sea Islands, as an area to “resettle”  slaves with “40 acres, a mule and seed.”

The evening begins and ends with Pearl (Shannon Matesky) a light skinned teenager and daughter of a slave owner. Her story arc provides an unsteady fulcrum for the play. Matesky was often inarticulate and limited in conveying the emotions demanded of the key part. There was just not enough weight to the performance to carry her balance in the script.

In order to survive, in a gender reversal, the girl becomes a drummer boy and improbably a pet of the general. She is carried “wounded” from the battle field. A sympathetic woman discovers that the boy has become a woman. Oh my. And now wears a dress. But a Yankee soldier boy, Irish from NY, is smitten.

In the final scene they are off to NY to live happily ever after. Where, he speculates, having shown so much skill as a battlefield trained nurse, she will attend medical school.

That may appeal to the liberal sentiments of a contemporary audience but it hardly jibes with the harsh realities of the period which are generously glossed over. There is a similarly sappy, upbeat romance between the emancipated Wilma (Alana Arenas) and her aw shucks suitor Coalhouse Walker (James Vincent Merideth). At any moment I expected him to burst into a chorus of “Bess you is my woman now.”

There were plots and subplots layered on top of each other like a stack of flapjacks slopped over with gobs of butter and syrup.

Emily Thompson (Carrie Coon) daughter of a judge and a flower of Southern womanhood has been burned out of house and heritage. With an instinct for survival she emerges as the nurse of the efficient but cold hearted Dr. Wrede Sartorious performed rigidly by the handsome Philip R. Smith. He is utterly blind to the fact that she is in love with him. Their scenes allow for a tiny, sanitized glimpse of the horrors of war.

The wounded are brought in on stretchers and there are piles of bloody bandages and sheets. All this is more symbolic than visceral.

Of course every war story requires its comic relief. The misadventures of two condemned Southern soldiers Arly (Ian Barford) and Will (Stephen Louis Grush) provide the energy and fun of a mostly hapless production. It’s a hoot as the amazingly clever and inventive Arly, played brilliantly by Barford, manage to switch sides as the tide or war ebbs and flows. He may change uniforms like the flip of a switch but in his heart he remains a Johnny Reb.

Yes, ultimately this was a work of art, an evening of theatre, and not a history lesson.

This was Doctorow and not PBS, Ken Burns, and his talking heads historians. But we don’t emerge learning much about Sherman or that gruesome March to the Sea.

Which is OK. But it also failed as a work of literature art and theatre. More tellingly we didn’t feel engaged by the characters. There was too much gratuitous liberty taken with the facts.

Perhaps, ultimately, I am too much an ardent historian and academic. It just doesn’t sit well when theatre plays fast and loose with the facts. Which is why I just hated the rock musical Bloody Bloody Andrew Jackson. And The March, another glib take on our gruesome history, doesn’t set that well either. Even leaving the facts aside it just didn’t cut it as a work of art. For many members of the audience, however, The March was an engaging escapist fantasy. But is that enough?

That’s a good question for a producer or the artistic director of a theatre company.

War is Hell but The March was more like purgatory.