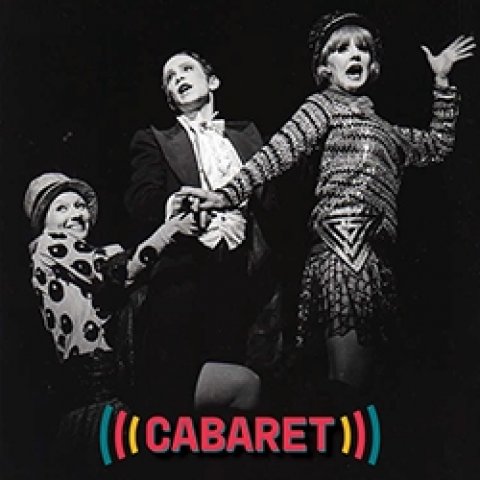 BUT for me, it is a misguided production. It lacks the sting the show needs and therefore loses some of what makes the musical so great.

Cabaret is one of the great musicals of the 1960s. Kander and Ebb (and book writer Joe Masterhoff) created a show that used a seedy, third-class nightclub as a metaphor for Germany slipping into the Nazi era.

It led to a film (with the secondary plot totally changed) and multiple revivals. In the 1990s, director Sam Mendes took the show and ramped up the metaphor. If some audience members were shocked when the original show opened in 1966; the revival shocked or stunned even more. It was brilliant.

Mendes’ made the seediness of the cabaret more obvious from the beginning; the deterioration of Germany was shown leading to its ultimate “final solution.”

When Goodspeed announced that it would produce the show to open this season – the first full musical on its stage since pre-pandemic 2019, I was excited.

The score is terrific, and the show is a blend of political/social commentary that seems relevant in today’s world of increasing hate, as Nazi symbols are spray painted in schools and synagogues.

The current production, through Sunday, July 3, seems to shy away from the harshness of either the original or the revival. It’s as if the director James Vásquez was trying NOT to shock the audience. Perhaps the fact that some audience members were upset with last fall’s production of It’s a Grand Night for Singing led them to sugarcoat the show. (A minority were upset when two men or two women sang love songs to each other).

In playing it safe (relatively speaking), Vásquez has diminished the metaphors in the work and cleaned up the realities.

This is not a totally sanitized production – sexual innuendo abounds as do simulations of sex in all its forms. Deterioration is shown in the sets and costumes.

If you have forgotten the plot, it is Berlin in 1929-30 when Clifford Bradshaw, a young American writer arrives to find inspiration. He soon meets Ernest who helps him a room in Fräulein Schneider’s house and introduces him to the Kit Kat Klub with its Emcee and star Sally Bowles.

For one – this Kit Kat Club does not look like a decadent Weimar Republic Belin cabaret – the girls look too wholesome.  These are not hardened chorus girls showing the wear and tear of drinking, drugs and sex. In what is probably the most egregious decision, the Emcee’s number “If You Could See Her” refers to a doll. That makes the final line of the song “She wouldn’t look Jewish at all,” meaningless rather than chilling.

Jelani Remy’s Emcee is more sexual than Joel Grey’s performance but much less sexual than those of recent revivals – including Alan Cumming’s performance.  He is less menacing and more flirtatious with the audience. He has a good voice, but the night I saw it, many of his lyrics were lost. It might have been a sound balance issue or it could have been a matter of clear articulation of the lyrics.

Sally Bowles is a difficult character to cast. She is a third-rate performer; it is implied that she gets her jobs not by her talent. Yet, she has many demanding songs. So how do you cast the role? I’ve always found that the best Sallys have been actresses first and singers second.  The original NYC production featured Jill Haworth, in London, it was Judi Dench.  The 1998 Broadway revival featured Natasha Richardson (brilliant); in 2014 it was Michelle Williams followed by Emma Stone.

Aline Mayagoita is a singer, so she sounds too good to be Sally. She nails the musical numbers; it is just that you would expect her to be headlining at an elite supper club not this seedy joint.

The secondary plot revolves around the landlady, Fräulein Schneider and Herr Schultz, the owner of a nearby fruit star. Their story is of mature love and how the political scene influences it. Jennifer Smith as Fräulein Schneider is excellent. Of all the characters in this production, you emotionally connect with her the most.

The role of Clifford is perhaps one of the least fulfilling roles an actor could have. He is central to the plot, yet he does not even have a solo number. It takes an exceptional performer to bring him to life; Bruce Landry tries hard but can’t quite manage it.

Fräulein Kost – the streetwalker who also rooms in the house – played by Terra C. MacLeod is good. As is Tim Fuchs as Cliff’s German friend, Ernst Ludwig and Kevin Ligon as Herr Shultz.

The best thing about this production is the choreography by Lanie Sakukura. She received the permission of the Verdon-Fosse Legacy to reconstruct Bob Fosse’s choreography of the “Mein Herr” number. (She had previously done it for the Broadway production of Fosse).

So go and see Cabaret but recognize it isn’t a standout production.