Tony Feher at the DeCordova Museum

Evoking Duchamp and Dada of the Absurd 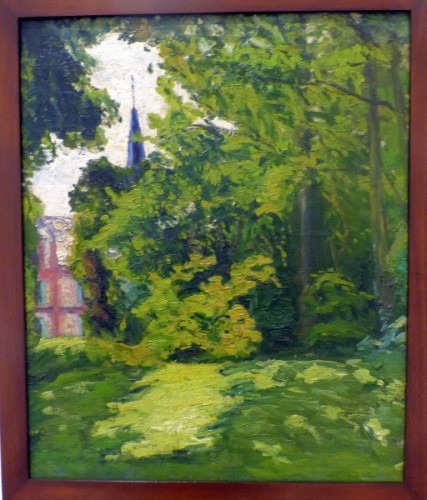 A 1902 painting by Duchamp which he later abandoned as too retinal. 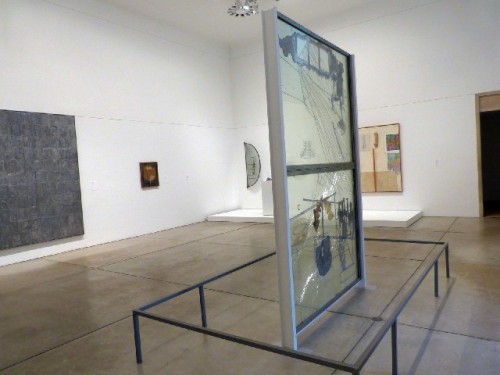 An installation by Duchamp and his followers at the Philadelphia Museum of Art. 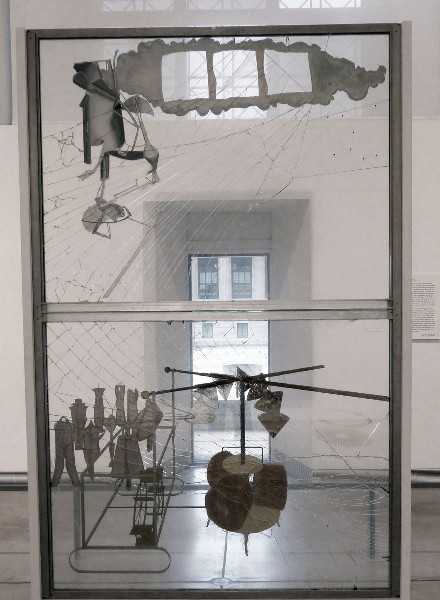 The Large Glass was dropped and broken but Duchamp fixed it. 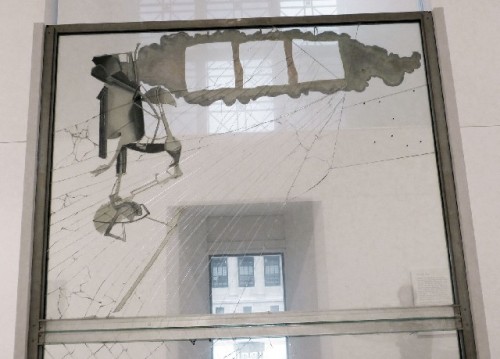 The realm of The Bride. 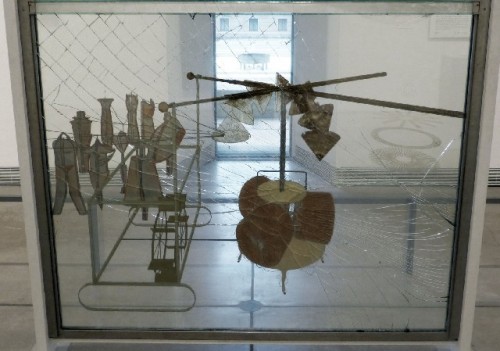 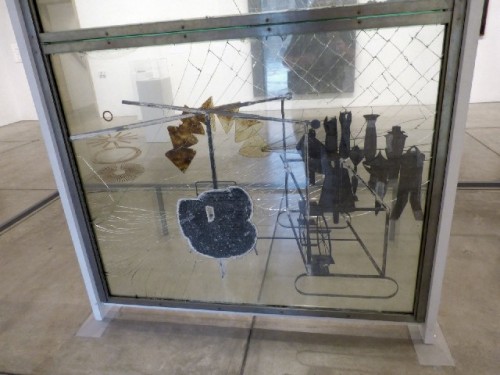 A view of the back. 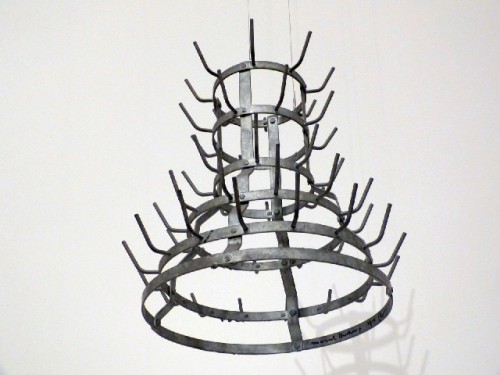 The Bottle Rack is an example of a Readymade or Found Object. 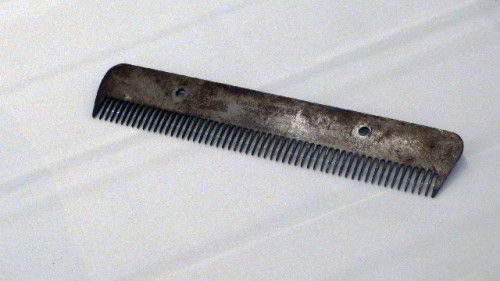 As is the Comb. 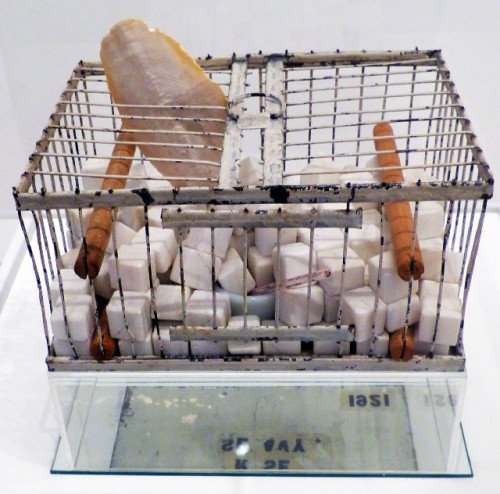 Why Not Sneeze Rose Selavy is an Assisted Readymade. 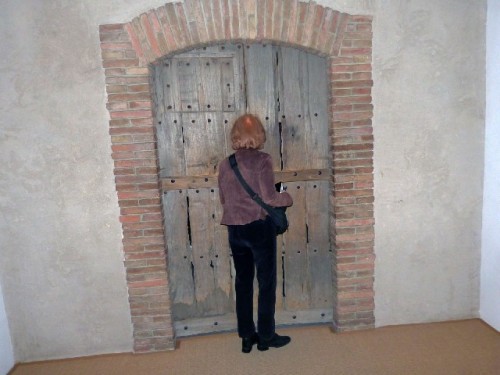 Astrid peering into the room that contains L’Etant Donne. 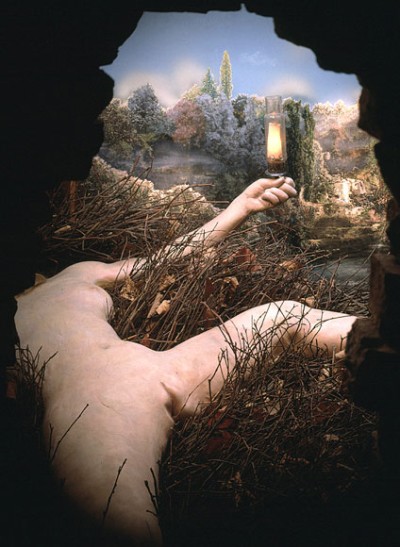 L’Etant Donne was discovered after the death of Duchamp. 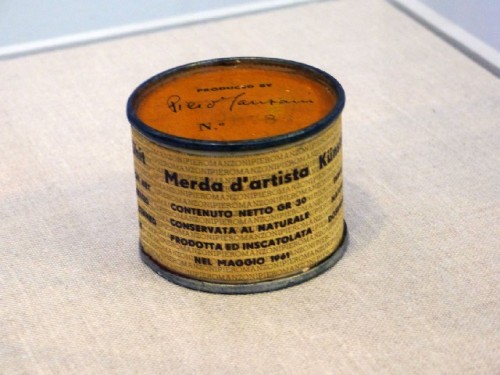 Manzoni’s can of the artist’s shit. 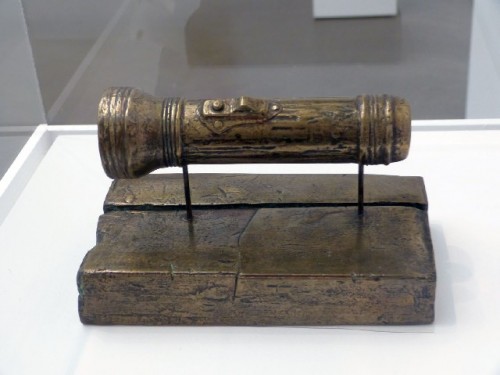 A dada inspired work by Johns. 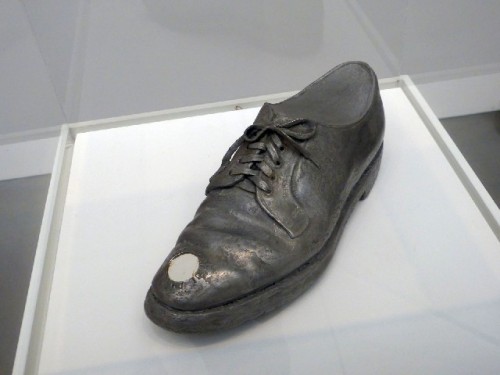 A shoe by Johns with a mirror on the toe for guys to look up skirts.

A Duchamp inspired work by Rauschenberg. 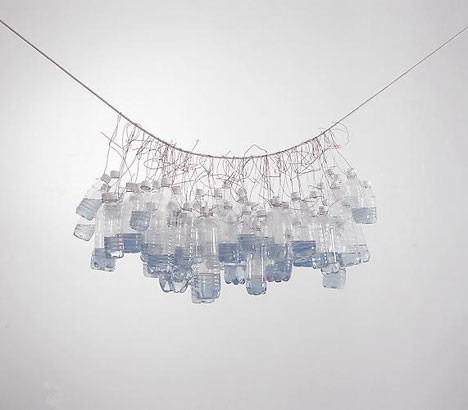 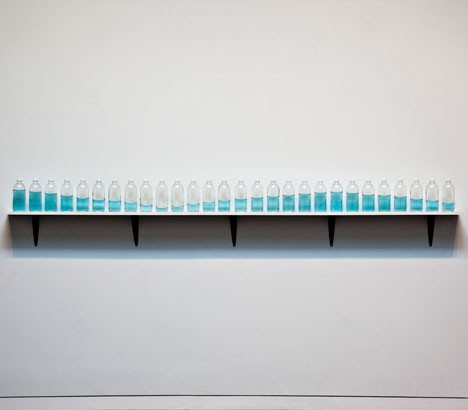 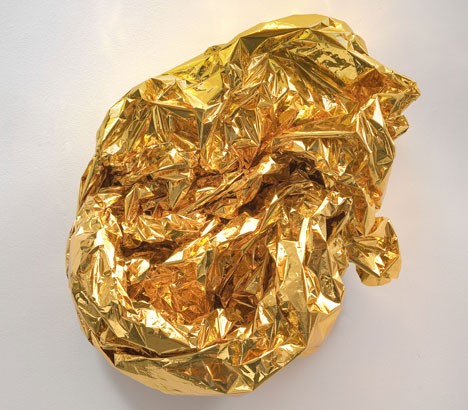 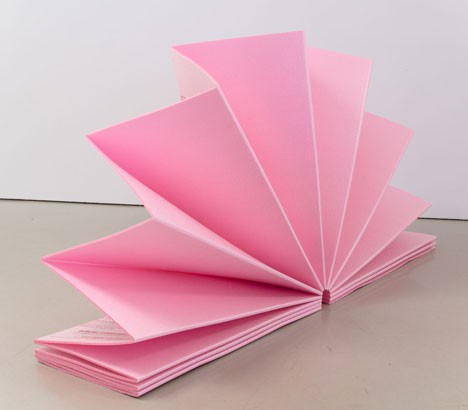 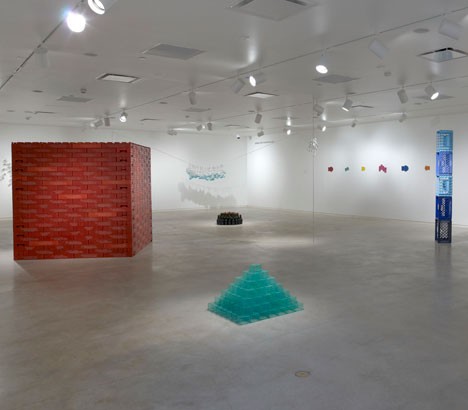 There is that aha moment when we encounter a work of art evoking a sublime economy of means and materials.

Often the most riveting works and ideas are numbingly simple and clever.

There is a sense of envy.

Why didn’t I think of that?

Or the vulgarian response of those who fail to appreciate and comprehend. “My kid can make art better than that.” Or, “Big deal, anyone can do that.”

Point is why don’t we?

This proves to be a contentious, infuriating debate about modernism.

There are those who vilify Marcel Duchamp as a spoiler of all that is best about the fine arts. Including some learned debates on this site by artist/ philosopher Martin Mugar.

While respecting his opinions and those of like minded artists according to Voltaire I do not have to agree with them.

During the first meeting of my annual avant-garde seminar at Boston University I started with a video on the music and art of John Cage. It included a ‘performance’ of his 4’33” which is composed entirely of rests which are silent.

After which I opened the class for discussion.

More often than not the students were enraged. The more so the better I liked it.

It infuriated, and hopefully challenged, when I just smiled at their responses.

After a few such meetings the anger gradually subsided as they began to catch the drift.

Not to say that they appreciated but rather that they came to accept the avant-garde.

Some stormed out, wrote scathing evaluations, or wanted their money back.

Perhaps a few became artists the better for letting me mess with them.

That was always my most fun and exciting course.

It challenged and changed me as much as them.

I actually had to think about and justify the shock of the new.

No pain no gain.

But also to define the fine line between pain and plain tedium, ennui, and boredom.

All of which is not necessarily an aha existential moment.

Particularly when it is forced and the artist is second rate or the experience mediocre.

Even worse are long, tedious, scholarly attempts to explain it.

You get it or you don’t.

Actually there were quite a few warm and fuzzy aha moments when perambulating the 25 year retrospective of witty Dada inspired works by Tony Feher at the DeCordova.

Over a Sunday dinner friends were outraged by the effusive praise of Feher by Sebastian Smee in the Boston Globe. They thrust the paper on me. I don’t get The Globe or read his excessively florid reviews.

“It harmonizes secondhandedness (our fate) with humility (our aspiration) and effulgent beauty (our heart’s requirement).”

I had to look up effulgent (effulgent adj. Shining brilliantly; resplendent.)

It annoys me to read critics with vocabularies more effulgent than my own.

There is an entire school of them. Mostly British or from the Colonies like Australia.

Reading Smee’s review Astrid commented that it made her want to see the show.

We did. And you should as well.

If you have an open mind, an appreciation of cleverness, and a sense of humor.

All of which are qualities I so love about Duchamp and Cage.

Mostly that they were able to produce such serious work while not taking themselves all that seriously.

As Cage told me during an interview “It is better to laugh than cry.”

They tend to view art as a labor intensive activity requiring heavy lifting, skill, attention to detail, and gravitas.

Like Wagner. Or the tedious and labored Pre Raphaelites.

Who you may just love and think that I’m being stupid.

For me, hands down, the greatest artist of the 20th century.

Pat Hills is going to send me a note about “where are the women?”

Having tea probably and how the heck would I know?

During a drive about last spring we visited the Philadelphia Museum of Art.

Primarily to see their small by definitive collection of works by Duchamp.

He didn’t make much stuff.

Even “retired” to play chess.

But Philly has his masterpieces “The Bride Stripped Bare by Her Bachelors, Even” which is also called “The Large Glass.” And the work which was discovered after his death in a secret studio down the hall from his NY apartment “L’Etant donne.” Plus some other works. Including early paintings which prove he could paint before he quit pronouncing painting as “too retinal.”

Asking a guard we were told that the Duchamp room was closed and being reinstalled after a big exhibition. Another guard overheard and offered to lead us in by the back way.

Not that there is that much to see.

But tons to feel and think about.

As obviously has Feher over the past 25 years.

Given its primacy for rare Duchamp the museum has contextualized it with related works by other artists. It’s always fun to see Manzoni’s little cans of the artist’s shit. Of course they are so friggin valuable that nobody ever opens one to see if it is really full of shit. And not just relabeled tuna fish.

As the greatest living artist of his time Duchamp was forgotten and presumed dead until Walter Hopps mounted a retrospective that changed everything. Johns and Rauschenberg were inspired by his work and the museum has examples of that.

Andy Warhol attended the opening of the Hopps show  and commented that “"Marcel Duchamp was having a retrospective at the Pasadena Museum and we were invited to that opening... I talked a lot to Duchamp and his wife, Teeny, who were great, and Taylor [Mead] danced all night with Patty Oldenburg - she and Claes had been living in California for a year 'to get the feel of a new environment,' she said, so they could send back a 'bedroom' for a group exhibit at the Sidney Janis Gallery in early '64... They served pink champagne at the party, which tasted so good that I made the mistake of drinking a lot of it, and on the way home we had to pull over to the side of the road so I could throw up on the flora and fauna. In California, in the cool night air, you even felt healthy when you puked - it was so different from New York."

Rauschenberg designed sets for a dance by Cunningham and Cage that blew up details of “The Large Glass.” Then elderly Duchamp was invited to the performance which he slept through. When asked he said that it was wonderful.

Read the Calvin Tompkins book which is fabulous.

As is the Feher exhibition.

There were many pieces that make me green with envy.

Or a stack of colored, plastic milk cartons.

Astrid loved the rug into the recessed pattern of which the artist inserted a patterns of marbles.

Feher saves a lot of stuff we chuck out and over years thinks of ways to turn it into art.

There are a lot of variations on generic bottles becoming less so by being arranged and filled or not with colored water.

We encountered a mobile created with wire hangers into one end of which were twisted in place those small, mini serve, plastic water bottles.

For the ecology minded Fehrer is saving the planet and enriching our lives by recycling stuff as art.

It implies that any of us with nerve and imagination can make art.

Which is what they teach kids in art classes.

And most of us forget when we grow up and get serious about art.

Except now and then grown up clever kids like Feher.

Which is just so wicked effulgent.