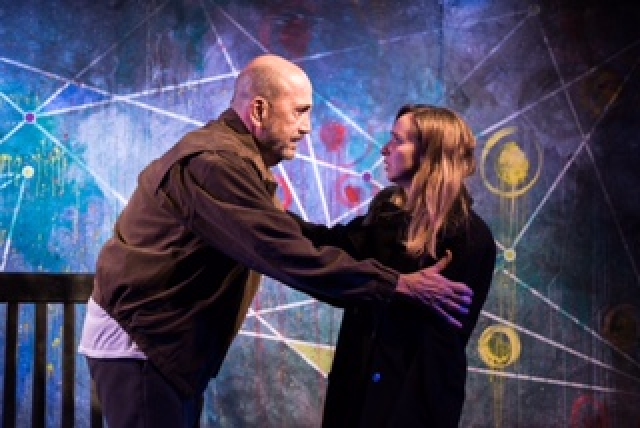 For the majority of us, our parents are among the closest, most familiar, dear and rock-solid support in our lives. They made us, after all.

Without us even knowing it, however, parents can take on other characteristics: unpredictable, mystifying and scary. We may wonder: Which characteristics and genes of our folks will we inherit? The desirable or undesirable? Genes that will lead to long, healthy lives or those that will leave us helpless and at risk of ailments, leading to a pain-filled life that ends prematurely?

They made us so chances are good that they will pass on some if not all of their characteristics and genes.

According to a report on CBSNEWS.com, genetic testing isn’t necessarily 100 percent accurate. In other words, it can’t prove with certainty which traits we inherit.

Like in most, if not all areas of life, certainty and clear, 100-percent proof eludes the characters in David Auburn’s Pulitzer Prize-winning play Proof, a relateable, engrossing drama receiving a strong production from New City Players. It opens the Ft. Lauderdale-based, not-for-profit ensemble theater company’s 2017 season.

The multi-layered play, which is virtually impossible not to relate to on at least one level, features  superb cast members who disappear into their characters. They remain in the moment for each of the play’s roughly two-and-a-half hours. It is directed with assurance and sensitivity by Timothy Mark Davis, who is careful to highlight the comic moments that leaven the otherwise solemn, unflinching drama.

Auburn’s play tackles with unflinching honesty serious, relevant themes: mental illness, the toll it can take on family members, dealing with an aging, slowly-deteriorating parent and adult sibling conflicts. It addresses the need for certainty and reassurance and uncomfortable, even frightening feelings that come with not being able to receive, legacy, trust and problem solving.

It’s a testament to Auburn that he packs so much into his play, yet it never comes close to being muddled. The play is as neatly structured as a well thought out mathematical equation leading to a logical, undisputed answer. Ironically and impressively, Auburn accomplishes this by employing a non-linear narrative. Appropriate for this play, a non-linear system “may appear chaotic, unpredictable or counterintuitive, contrasting with the much simpler linear systems.” Even more ironic, the play’s narrative structure, which jumps back and forth in time, seamlessly demonstrates how one development could logically lead to another.

While mathematics is the backbone of Auburn’s narrative structure, and mathematical terms are mentioned in the play, you don’t need to know an elliptic curve from a modular form to understand, appreciate and relate to this easy-to-follow play. It might help to know that in the mathematics world, a proof is an inferential argument for a mathematical statement.

“Proof” is that rare play that is thoroughly relateable and as riveting as an Agatha Christie or John Grisham mystery.

The play’s title refers to a series of mathematical proofs that Robert (Jeffrey Bruce), a brilliant but troubled mathematician living in Chicago in the year 2000, wrote.

Among the contents of his old, deteriorating home are stacks upon stacks of mathematical proofs. But the title also refers to the proof the characters are seeking about a mystery central to the play, as well as other things.

Robert’s long-time, possibly unstable and long-suffering caretaker has been his adult daughter, Catherine (Krystal Millie Valdes). She is well-versed in math. Her concern about inheriting her father’s genius appears to override any excitement she may possess about inheriting his unique abilities.

Young graduate student Hal (an eager, determined, polite and well-meaning Johnny Contini), also figures into the mix. He spends time at Robert and Catherine’s apartment going through  notebooks of proofs.

At the center of the play is a mystery.  Hal discovers a potentially revolutionary proof that he reasons no mathematician could have been brilliant enough to write. Robert meticulously dated each of his proofs.

This particularly one was written during a period of mental instability. Could he have written it?

A stunning declaration that ends the first act leaves us in a state of suspense, antsy for the second act to begin. We want to know the truth.

But playwright Auburn offers no definitive answers, leaving us to ponder the possibilities as the play ends.

Enter the 50-seat, black box theater, the home of Empire Stage where the production takes place, and you’ll find plenty of proof that these actors have internalized their characters. The emotions feel so much more visceral in this intimate space.

Within that space, on stage, is Robert and Catherine’s home, rendered simply, with minimal props by scenic designer Ryan Maloney.

The set is more symbolic than one that convincingly places us in a particular location. A spider web-like maze is drawn onto three boards with a head-spinning, complex mathematical equation written out. We don’t know where to look, perhaps symbolizing the characters’ fruitless but nevertheless painstaking search for certainty and proof.

Krystal Millie Valdes’ Catherine is a spark plug, an impulsive, weary, despondent young woman whose yelling tantrums come as automatic as reflex actions during an annual physical. There is noticeable pain and exasperation etched into her face, which betrays a forlorn, vulnerable expression. Catherine’s irritability never feels forced, nor do her bursts of shouting and sarcasm.

The sarcasm is directed largely at her older sister, Claire, who has flown in from New York City for their father’s funeral. Claire’s firm belief is that, with their father gone, her younger sister is better off moving into Claire and her husband’s New York apartment. There she can be taken care of and become more productive.

Erica Rose Dade imbues Claire with compassion, but heat radiates from the stage when the two sisters go at each other. They argue over what type of care was best for their father when he was alive and whether Catherine should move to New York.

Claire’s elegant outfit (the character-defining costumes were designed by Maloney), makes her stand out. She’s clearly one of those classy, socialite-like women who are well off and meet in upscale social situations. In this way, she contrasts from Catherine, who, up until the play begins, has spent her days holed up in her home, basically depressed, deprived of energy and sleeping all day.

Their father, Robert, makes appearances, both alive and dead. As Robert, Jeffrey Bruce portrays with equal skill the character’s love and compassion for his daughter and tendency to experience outbursts. Each feels natural.

Watching his performance, we might be reminded of a relative or friend who’s suffering from dementia.

Bruce’s wide eyes convey an excitement. It grows wider with enthusiasm as he thinks about numbers or looks out into the distance, picturing equations or other things that make him happy.

Happiness isn’t a feeling you should expect upon exiting the theater. But you’ll no doubt leave perplexed, in deep thought and touched in some way by the recognizable characters and the many relevant issues the play leaves us to ponder.