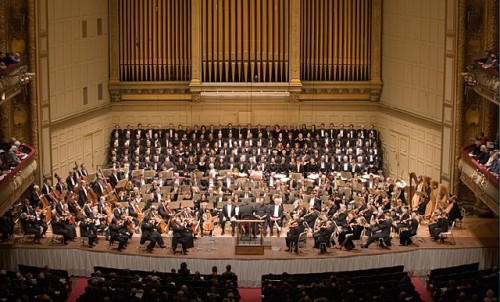 You might think musicians would be at the top of a symphony orchestra’s food chain.  So did I.  When I joined the Boston Symphony violin section in 1975 at the tender age of 22, fresh out of college, bursting with enthusiasm, I was under the naïve misconception that the management of the orchestra worked for the musicians:  They would organize the concerts for us, making sure all the details were taken care of; if a problem cropped up, we would let them know, and they would fix it for us; we would let them know what salary we thought was fair and they would go out and raise the money.  After all, we were the stars that came out at night.  (Well, four nights a week, anyway.)  Audiences don’t pay money to hear managers.  Right?

Well, so much for that expensive Yale education.  It was quite an eye-opener when I saw my first organizational chart of the BSO.  Scratching my head, I asked, “Hey, where are the musicians on this chart?” as for the life of me I couldn’t find us.  Yes, there was the board of directors at the top, then right below them the Music Director (principal conductor) and Managing Director shoulder-to-shoulder.  Then a bunch of other departments, committees, and middle management folks below them, and…oh, there we are!  In the vast administrative and artistic web of the organization, the musicians of the Boston Symphony, 102-strong, were represented by a diminutive, seemingly insignificant orb in the lower right hand corner of the page, tethered by various lines to other functionaries “above” us.

And that, in a nutshell, is what I think is – in so many orchestras across the United States today – the crux of the disconnect between musicians on one hand, and management and boards on the other.  Musicians, who have spent a lifetime honing their craft, view themselves as an indispensible component of a successful symphonic enterprise; a component that needs to be nurtured artistically, financially, and even emotionally.  Administration, though, is preoccupied with making sure the organization remains a viable, ongoing concern and in this day and age as they clamber to respond to radically changing demographics, tastes and technologies, the musicians have increasingly become the first casualty, rather than the last resort, of budget and program revision.

Relations between musicians and management on a day-to-day basis generally exist on a fairly even keel; they’re productive and sometimes even cordial.  The work gets done.  At every rehearsal and every concert (both of which come under the heading of “services”), the personnel manager makes sure everyone is on stage who is supposed to be on stage before the first downbeat; orchestra librarians prepare the parts for the musicians and have them on the stands everyday; various musician committees meet with various managers to schedule auditions for new members or to review tour conditions. And the list goes on and on.

All the activity that goes on within a symphony orchestra is defined and guided by the contract, or CBA (collective bargaining agreement), between the musicians – as represented by the union – and the symphony.  It stipulates the musicians’ working conditions, schedule (including length of season, the number of services that may be scheduled weekly, length of services, scheduling of vacations, etc.) and the compensation they receive for their work, while defining the rights of both parties.

The artistic component of our job rests exclusively between the musicians and the music director (principal conductor) and is generally outside the purview of the CBA, though there are provisions for non-renewal and termination of individual musicians’ contracts.  Though the conditions of auditions for the hiring of new musicians are outlined in a CBA and involve a musician advisory audition committee, it is the music director, not managers, who has the sole authority to hire new musicians.  You’ll rarely hear a manager publicly make an artistic judgment about a specific musician – that’s something that is tacitly agreed to be off-limits, and in any case doesn’t do anything to serve the best interests of the organization either within or without.

Contractual disputes, which are often mere hiccups in scheduling or personnel issues, get resolved more often than not when the orchestra committee meets with the personnel manager or orchestra manager.  When, despite the best efforts of both sides, disagreements fail to get resolved, many orchestras’ CBAs include a defined grievance process, which, though inevitably contentious, usually resolves these disputes.

All this has been standard operating procedure in American orchestras for decades, so why are many of them now in critical condition?  We have seen a serious breakdown at the bargaining table itself, the nexus of the vital musician-symphony relationship.  When I did my first contract negotiation in 1980, the musicians achieved a 40 percent salary increase over three years.  The M.O. on both sides of the table was to start the highly ritualized dance called collective bargaining with an exchange of wildly divergent proposals representing the interests of each side in June, with the expectation to meet somewhere in the middle sometime before midnight on Aug. 31.  Tom Morris, who was the Managing Director of the BSO at that time, used to say that if he put his predictions in a sealed envelope at the beginning of the process and then opened it when an agreement had been reached the two results would be practically identical.   I asked him why the hell didn’t he tell me that in the beginning.

Today, musicians are trying desperately to fend off 40 percent salary cuts, plus concomitant reductions in orchestra size, length of season, pension and health care.  Simply maintaining what they already have in their expiring contracts is considered a victory because managements are demanding draconian downsizing and then don’t budge in months of negotiating, an obstinacy that has led to numerous debilitating strikes and lockouts over the past decade.

Why has this happened?  When the economy tanked, musicians heard an oft-repeated mantra that began with: “In these tough economic times…” and, with grudging willingness, bit the bullet.  Now, however, it’s clear there’s a lot more to it than the state of the general economy, because even as the recovery takes hold, orchestra administrations continue to cut back.

The broader issue is that there has been an ongoing sea change in how administrations conceive of the very model of a symphony orchestra.  It involves a Rumsfeldian transformation of the traditional orchestra that focuses primarily on the great symphonic repertoire, to one which can be splintered into small ensembles in order to provide a diversity of programming with an emphasis on community and popular tastes, education, and outreach.  In this scenario there has been a devolution of the core notion that musicians should be provided with industry-competitive compensation, because if Bach takes a backseat to Bacharach 1) ensemble excellence is devalued as a first priority, and 2) there is a much larger pool of musicians who can do a representative job.  Why pay for the best when pretty good will do?  The result?  A very turbulent transitional time in which orchestra musicians have routinely been shown the door, unemployed for months at a time, until they capitulate to management demands.  Fortunate ones, like Los Angeles and Boston, have transitioned seamlessly without any loss of quality or musician compensation or focus on the core product.  Others, including venerable institutions like Detroit and now Minnesota, have had their very existence threatened by an inability to find a mutual path forward.

As I progressed through my career as an orchestral musician and negotiator I recall advice I received early on from my former teacher, friend and mentor, Gerald Gelbloom, a wonderful atheist-Jewish-commie-capitalist-violinist in the BSO.  With a pat on my cheek, he told me, “Boychik, remember that when we’re on stage we may be artists, but when we’re at the bargaining table we’re labor—nothing more, nothing less.”  Though at first I was off-put by being relegated to the same category as an autoworker and longshoreman, after some consideration the notion became one I was proud of, and better yet, helpful in bargaining.  Essentially, Gerry was clarifying what I had seen at the top of the BSO organizational chart; that is, unlike most workers, an orchestral musician has two bosses: the music director and the CEO.  With esthetics and business as separate entities, I no longer was tempted to try to convince management to pay us top dollar in recognition of what great artists we were because – even assuming it was true – simply put, that was not part of their calculations.  It was a losing argument.  What was ultimately more important was for us to make demands we believed were – summarized succinctly by S. Stephen Rosenfeld, our union attorney – “fair, reasonable and achievable.”  It no longer bruised my ego to be referred to as “a fixed expense,” the product of an accountant’s algorithm.  In the eyes of those sitting on the other side of the table, I was the sum of my salary, seniority, health insurance, pension and FICA contribution.  So be it.

Yes, we had some knockdown drag-out fights, with four-letter words flying and with the bargaining table fortunately between us to lessen the likelihood of hand-to-hand combat.  But all that was part of doing business.  (As an amusing aside, when I was involved in negotiations for the Utah Symphony musicians in the 1990s I told Sandy Macomber, the then-acting CEO of the orchestra – who I like very much – that I thought management’s proposal “stinks.”  I was proud of myself for my restraint in using relatively tame terminology for what I really thought, but I guess in Utah them was fightin’ words, and Sandy and I went toe-to-toe like a baseball manager on a losing streak and a myopic umpire.  If the encounter had been outdoors I’m sure I would have kicked up a cloud of dust.)

In recent years, though, the challenge for us “fixed expense” musicians has been to stave off determined efforts to convert us into “an expense in need of repair.”  Gone are the days when “fair, reasonable, and achievable” cut much mustard.  “Take it or leave it” is far more likely to be what’s on the table.

What’s the solution?  Is there a solution?  Now that the economy is returning to health will musicians convince administrations to make a re-concerted effort to compensate them at more traditional levels?  Or will there be a continued evolution to a thoroughly different orchestra model that utilizes a smaller and lower-paid core of musicians, yet expands the variety of the organization’s activities by hiring freelancers on an ad hoc basis?  As opportunities for musicians in Asia and Europe proliferate, American orchestras are struggling to come to terms with the future.  Maybe the golden era of the great symphony orchestra has played itself out in this country.  Nothing lasts forever, but wouldn’t the world be a better place if Mozart and Beethoven were exceptions to that rule?

Gerald Elias is an acclaimed author and musician. A former violinist with the Boston Symphony and associate concertmaster of the Utah Symphony, he has concertized on five continents as violinist and conductor, and his compositions have been performed throughout the United States. Since 2004 he has been music director of the Vivaldi by Candlelight concert series in Salt Lake City, and since 1989 a faculty member of the University of Utah. His award-winning Daniel Jacobus mystery series, based upon experiences gleaned from his lifelong musical career, takes place in the dark corners of the classical music world and has won extensive critical praise. Visit his website at www.geraldelias.com.

View all posts by Gerald Elias →
Reposted permission of Gerald Elias and Reichel Recommends.
Back to Opinion Section Home