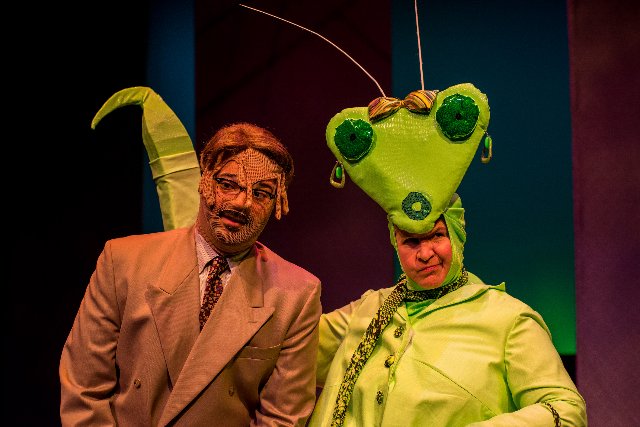 (Photo by Justin Namon) Can you say oddball? You never know what type of characters you'll see in City Theatre's Summer Shorts. Pictured from left are Alex Alvarez as Melto Man and Elizabeth Dimon as Lady Mantis. 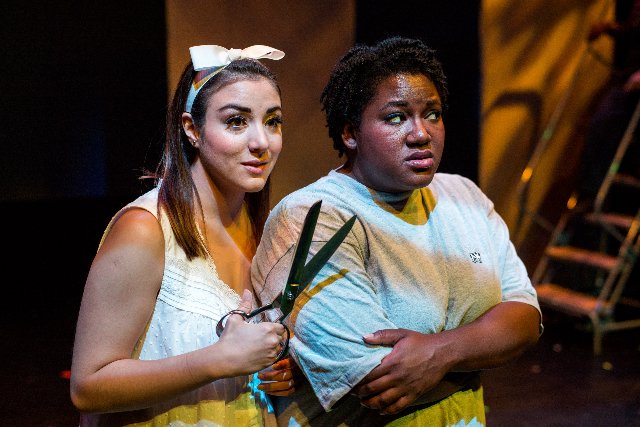 (Photo by Justin Namon) Violet (Diana Garle) has an unwelcome surprise in her hand -- at least for the unsuspecting and scared Julie (Daryl Patrice) in Steve Yockey's short play Bedtime. 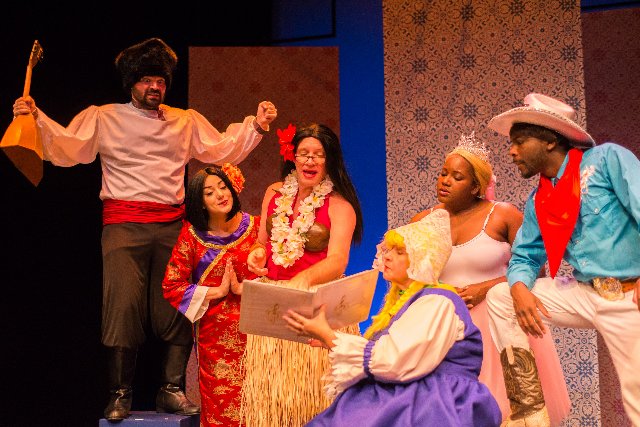 (Photo by Justin Namon) In Mark Harvey Levine's One More TIme, it's dega vu for a group of eccentrics in what may very well be hell.

It might be time for bathing suits, summer beach nights and picnics.

But you’d never guess from the first offering of this year’s version of City Theatre’s Summer Shorts festival.

Instead, candy canes, Christmas trees, holly and eggnog might come to mind.

Surely, you’re bound to think it’s the most wonderful time of the year based on this year’s first short show, a musical. It’s titled The Almost In-Laws, about a human couple about to meet the parents of the groom-to-be.

The thing is, the folks are elves and they’ve raised him as such. Some tension fills the air during the meeting, despite the parents’ jolly demeanor. But in the end, forgiveness results in a happy, if somewhat sentimental ending. Clever, character-defining lyrics and music, some upbeat, some contemplative, enhance the proceedings.

This musical is a jolly treat and the holiday’s visually-enthralling colors are on full display. Credit the design team’s creative efforts. Their fine work is on display throughout the evening.

And let’s not forget the actors’ fine work: The ensemble for this and the other plays are Alex Alvarez, Elizabeth Dimon, Diana Garle, Daryl Patrice, Marquise Rogers and Tom Wahl.

All work as a cohesive whole. Individually, they prove chameleonic in their ability to slip in and out of roles with ease. The performers are generally blessed with strong, expressive singing voices.

Meanwhile, audiences are sure to find something to laugh at, relate to, or think about in these plays.

This line-up runs the gamut from a persistent feline to a symbolic father and daughter outing and a writer’s mid-life crisis. There’s plenty of variety.

Short plays lasting roughly 10 minutes which leaves little room for character development or fleshing out plots. Nevertheless, the writers waste little time in arriving at the crux of their plays.

The strongest works in the line-up also include a clear beginning, middle and end. The characters learn something about themselves or undergo a positive change.

Good examples of such plays are The Almost In-Laws as well as Run, by Bekah Brunstetter.

In Run, Ellie (a convincingly lethargic Patrice) is an overweight girl who worries too much.

But leave it to dad to perk her up by suggesting a vigorous run, which turns to be symbolic. See, Ellie’s not just running to shed pounds, and perhaps the weight of all those worries she’s lugging. She’s also running forward, eventually at full force toward, not away, from them. The message: We must confront problems. Avoidance can only worsen them.

Garle plays teenage Violet with a hint of the sinister (picture the fictional Heather Chandler from Heathers the Musical).

Violet, an oddly confident, effortlessly sexy teen, has invited her friend Julie over for a sleepover. Apparently, someone’s stalking Violet and she needs Julie’s help – or does she?

Within this environment, realistic sound effects such as thunder, rain and lightning reinforce the tense aura.

In contrast to Garle’s confident Violet, Patrice’s Julie is hesitant and jumpy. Patrice overdoes it a bit at times. Also, for a short time, director Margaret M. Ledford curiously keeps Patrice in a corner. During this time, Julie betrays little to no emotion and hardly moves. But overall, Bedtime is a bone-chilling “Short.”

The only problem is, we don’t know how it ends. Does the brave young woman prevail over her sinister stalker?

Speaking of “sinister” that’s not exactly a fitting adjective for the odd and fiendishly funny Melto Man and Lady Mantis, by Eric Pfeffinger. You’re more likely to compare it to the 1988 flick Beetlejuice then, say, the 1974 movie Texas Chainsaw Massacre.

In Melto Man, an industrial accident has resulted in a transformation from the previously human characters into creatures. One of them is Melto (an otherwise charming Alvarez, when he’s not emitting involuntary monstrous bleats). The other individual is an insect-like being who, as Dimon plays her, grows in confidence throughout the course of the play. By the way, Dimon here dons one of costume-designer Tillman’s most stunning costumes.

The setting is Melto Man’s office. He’s doing her taxes.

Indeed, this is one of the line-up’s strangest plays.

So is One More Time by Mark Harvey Levine, about a group of ethnically diverse colorful characters stuck, perhaps, in hell. But whether you're in this "state" or "place" could depend on your outlook.

These eccentrics have sung “It’s a Small World After All” ad nauseum, much to the chagrin of one character.

You could view this work from an existentialist, absurdist lens.

On the other hand, there’s no potentially hidden meaning in the escapist Ailurphobia by Scott Gibson. The title refers to an extreme or irrational fear of cats. Wahl as Jinx the cat and his wary, serious expressions will keep you laughing and riveted to the stage as a feline interfering with a couple’s sexual affair.

And isn’t a chance to just sit back and laugh one reason that brings you back annually to City Theatre’s Summer Shorts?

City Theatre’s Summer Shorts continues through July 1 in the Carnival Studio Theater at the Adrienne Arsht Center for the Performing Arts of Miami-Dade County, 1300 Biscayne Blvd. in downtown Miami. For ticket prices and show times, visit www.arshtcenter.org or call (305) 949-6722.