The Spitfire Grill a Musical Dramedy 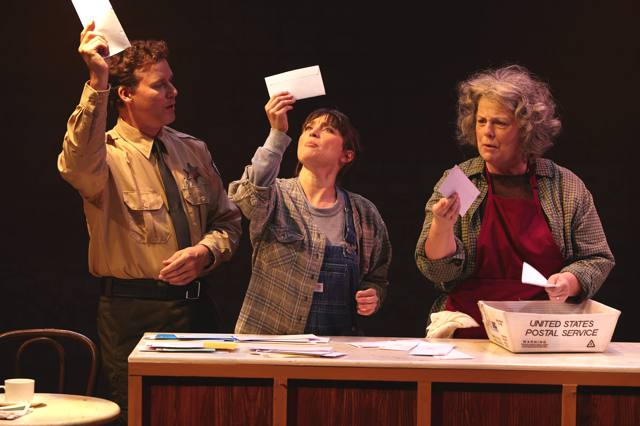 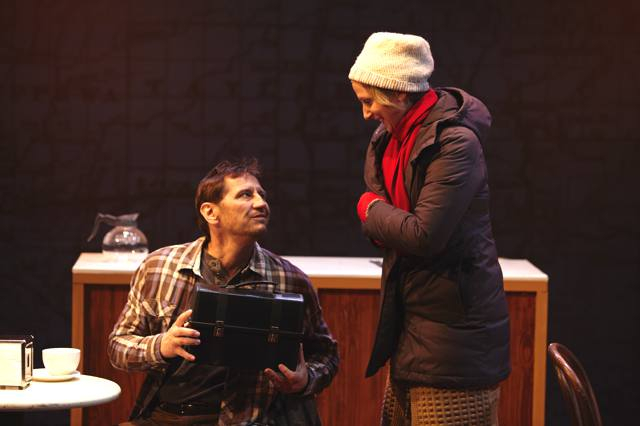 The world of today appears to be in constant turmoil.   Culture wars and shooting wars abound here in America as well as on every continent on our fragile planet.  Everyone stares too long and make judgments far too quickly when it comes to the strangers we find in our midst.

We rely on our tribal or family loyalties, the cornerstones and touchstones of a civilized society that at times is necessary but in so doing robs us of enlightenment and the pleasures that comes when societies reach out culturally to one another.  Take the metaphor of food, as one example of how we have expanded our gustatory experiences and horizons over the years.   Our American melting pot society is filled with success stories where one can see the advantages and possibilities that a diverse society provides.

The current North Coast Repertory Theatre revival production of “The Spitfire Grill”, a musical dramedy written by James Valcq and Fred Alley with music by Valcq and lyrics by Alley, is a shining example of the power some ‘outsiders’ can bring to the table or to a community if just given a chance.  Intelligently, sensitively and seamlessly directed by Jeffrey B. Moss, with an inspired ensemble cast of actors who can sing (and boy, do they sing) this uplifting and warmhearted musical is just what American theatre audiences need right about now.

The story in short, centers around fiercely independent Percy Talbott (a terrific Aurora Florence), a young, Appalachian-accented woman who has just been released from prison. Percy is looking to find a place for a fresh start in life.  While in prison she read a travel magazine about the idyllic, small, rural town of Gilead, Wisconsin which sounded like a good place to begin her new life journey.

The local Sheriff, young Joe Sutter (Kevin Earley), who is also Percy’s parole officer finds her a job at Hannah Ferguson’s Spitfire Grill, owned by and operated by a force-of-nature earth mother solidly played by actress Devlin. It’s the only eatery in the town and is frequented daily by loyal residents.  The Spitfire Grill has been up for sale for ten years, but has never had any interested buyers. Times have been tough for America’s Midwest economy and Gilead is barely hanging on.

Shelby Thorpe, the wife of the out-of-work local stone quarry foreman Caleb (Kevin Bailey) is a caring, young woman played by Soprano Meghan Andrews, who gently tries to make a home life while at the same time occasionally helping Hannah at the diner. She endures the frustration of her proud husband Caleb, who resents her time spent at the Grill and her association with Percy. To further complicate matters, Shelby and Percy have become friends.

Post Mistress and town gossip Effy Krayneck, never misses a chance to open the mail before the addressees is nicely played and sung by Maggie Carney who makes the most of her comic relief role as Gilead’s leading gossip and busybody.  Also, there is a character called The Visitor who never speaks, but whose haunted eyes speak volumes, is played by Matt Thompson.  And, that’s about as far as I’ll go with spoiler alerts.  You will just have to see this splendid musical for yourself.

The real beauty of this production lies in the multi-talented ensemble cast with a director who understands how to craft and shape compelling, poignant, comedic, and dramatic moments and performances from pros who are a joy to watch.  Everyone is constantly in the moment.  On- stage chemistry electrifies the entire cast from the minute that Percy comes on stage and sets the tone for all the magic that follows with her song “A Ring Around the Moon”.

The story of “The Spitfire Grill” unfolds over fifteen haunting and poetic songs that conjure up echoes and aural memories of John Denver’s “Take Me Home Country Road” along with Valcq and Alley’s original country/folk musical score that features such numbers as: ‘The Colors of Paradise’ sung by Percy and Shelby, ‘Forgotten Lullaby’ lovingly rendered by Hannah, and the rousing “Shoot the Moon” by the company that ends act one.

In act two, the numbers ‘Wild Bird’ by Shelby, ‘Shine’ by Percy, and a poignant ‘Way Back Home’ by Hannah, bring the entire company back on-stage for another rousing Finale. The nicest part, at least for me, is that this highly entertaining musical is performed without one f-bomb being hurled from the stage. The musical’s creators substituted soaring music, soulful country lyrics, and sheer talent instead of relying on attention-grabbing street language pyrotechnics to win over its audience. However, in the name of transparency, this musical was written seventeen years ago in 2000.  My, how we’ve changed.

The production is designed by Marty Burnett, lighted by Matt Novotny, with costumes by Elisa Benzoni, and sound design, by Chad Lee Thymes. The excellent musical accompaniment is headed by musical director Alby Potts on keyboard, guitar/mandolin by Nikko Nobleza, violin by Catherine Gray, and cello by George Spelvin (that great old theatrical name). In the new and emerging discipline of projection design, Aaron Rumley is right on the money; not too many just the right amount to set the tone and enhance the moods.  If I were to mention that some of the song lyrics were a wee bit too repetitious and went on too long, it would probably give my age away.  So I won’t.  But the soaring voices of the company made me forget all that repetition.