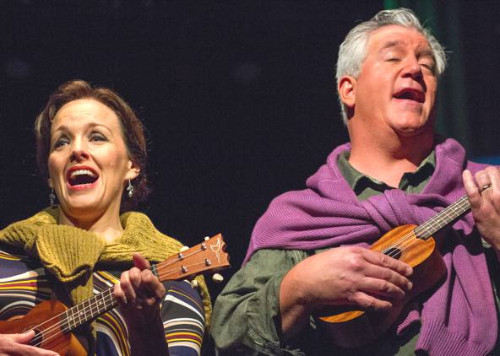 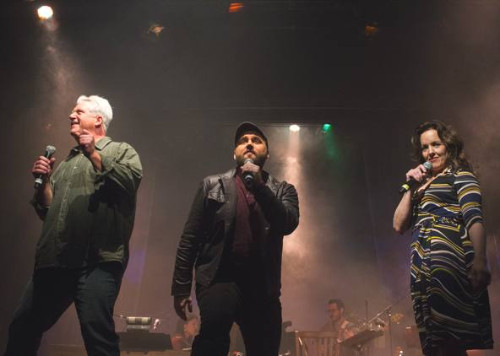 Cast and Band by Daren Scott

San Diego Repertory Theatre, one of the country’s finest urban theatre venues has a winning world premiere hit on its hands thanks to two Tony Award-winning actors in Alice Ripley and Gregory Jbara, along with local San Diego tenor Kurt Norby and the musical direction of Korrie Paliotto and her onstage band of musicians.

The company, under the direction of Javier Velasco bring the music of Harry Nilsson, one of America’s unheralded and relatively unknown singer/songwriters, to vivid life. The musical tribute to the late singer the Beatles called their favorite American artist, is conceived by actor and musical arranger extraordinaire Steve Gunderson and Javier Velasco, the artistic director of the San Diego Ballet.

“Everybody’s Talkin’” is more of a free-flowing musical tribute than a traditional book musical.  There isn’t one line of scripted dialogue spoken by the performers.  It’s just the genius of Nilsson who was a poet/philosopher and a reluctant troubadour performer, whose songs lend themselves to the inspired arrangements by Gunderson and the staging by Velasco that propel the show along.

More than fifty musical numbers lovingly and beautifully performed by Ripley, Jbara and Norby deliver the clever and off-beat lyrics and music to the audience that illuminates the insight and genius of Nilsson, and his uncanny knack of being able to connect with his fans on their wavelength.  If you have ever been in love, crazy love, and lost that love, then you’ve experienced the emotions and feelings that Nilsson so brilliantly engenders in his music and lyrics (bring two hankies – the love game is a rough and tough competition).

The American singer songwriter Bill Withers also had the talent and skill to tap into those aching emotions with his “Ain’t No Sunshine” lament back in 1971.  Belgian Jacques Brel was another singer songwriter who excelled in the game of love, loss, and pain with his haunting song “If You Go Away”.

What is so entertaining about “Everybody’s Talkin’ is the variety and range of the songs performed by mezzo-soprano Ripley.  She has that wonderful instrument that produces a vocal range from softness to off-the-charts power, when called for.  It also helps that she is an accomplished actor and musical theatre performer who just doesn’t sing the lyrics, she acts them out and lives the lyrics. It’s an impressive performance.

Jbara’s light comedy baritone has just the right amount of whimsy and an easy manner to engage the audience.  The chemistry between Ripley, Jbara, and Norby in three part harmony is the sizzle that sells the steak in all of their musical numbers especially these standouts: “Ten Little Indians”; “Coconut”; “I Said Goodbye To Me”; “All I Think About Is You”; and the haunting “I Will Never Leave You” and the achingly poignant “Without You”.  And, of course, the finale number by the entire company singing “Everybody’s Talkin”.

The technical credits are first rate beginning with Musical Director Korrie Paliotto and her musicians: Jessie Audelo on Woodwins; P.J. Bovee on Guitar and Keyboard; Issac Crow on Bass and Percussion and Dave Rumley on Drums and Vibraphone.  The set design by Sean Fanning is a study in circular levels that work well for the performers who need the space to move about without leaving the stage.  The lighting design by Philippe Bergman is especially sharp and effective in making sure the stars are always in their light whether moving or stationary.

It’s a delightful evening of theatre: Three highly accomplished performers singing the songs of the late, gifted and talented Grammy- winning singer/songwriter/performer Harry Nilsson.  It doesn’t get much better than this.