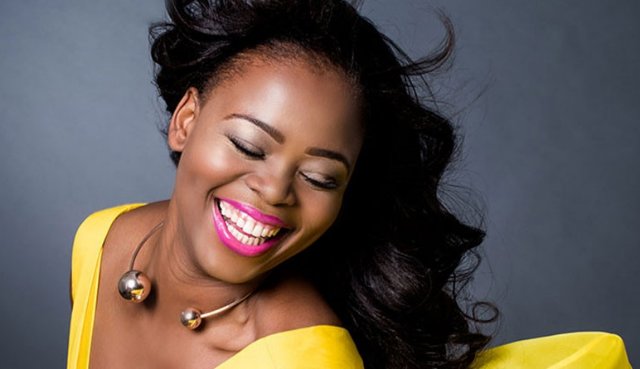 Pretty Yende makes her Carnegie Hall debut with Michael Tilson Thomas and the MET orchestra.
Carnegie Hall ended its 2017-18 season Tuesday night with the last of three concerts featuring the MET Orchestra. This year, the pit band at the Metropolitan Opera has been playing under a succession of different conductors. This one was conducted by Michael Tilson Thomas. The music director of the San Francisco Symphony, Mr. Thomas (or "MTT" as he is known to all) will serve next year as a Carnegie Hall Perspectives artist, and is scheduled to lead his California forces in the Opening Night concert on October 3.
This was the boldest, most varied and musically interesting of the three concert programs offered by the MET Orchestra this spring It opened with Evocations, a work by Carl Ruggles. Ruggles was a legend among American composers, a crusty Vermont maverick who, in the course of a long creative career, was an inspiration to a long list of musicians. A music teacher in rural Vermont, he produced only a dozen works, with four of these going unpublished in his lifetime. The four Evocations, which take about twelve minutes to play, took a decade to write, and were originally intended as works for solo piano.
Before it started, Thomas took the mic to offer some thoughts on the work and his experience meeting Ruggles. He described a visit to the Vermont country schoolhouse that the composer called home. "There were bits of music everywhere," he said, detailing how notes were scrawled on the backs of bits of paper and even how the room was papered with (reversed) Christmas wrapping paper so Ruggles could work out a complicated contrapuntal passage. He also described the density of thought that characterized Ruggles' music, which packed information "vertically" into a passage, conveying a lot of ideas in just a few bars.

Whatever madness there was in Ruggles' home life, there was no disputing his method or the quality of these four short pieces. These are art works that are at once challenging and accessible: a happy marriage between the dense, highly vertical process of thought of serial technique and the more open, foursquare melodic nature of American music. Each was like a well-crafted bullet, fired with accuracy and precision. Their complex ideas have resonance and a power that was to be savored long after the last notes were played.

The soprano Pretty Yende is nothing less than a sensation, and she was a canny choice to close out this season in what marked her debut on the big stage of Stern Auditorium. In the first half, she sang Exsultate jubilate, a motet written by the 17-year old Mozart for the castrato star of his opera Lucio Silla. This is a gorgeous sacred work, with an exuberant melodicism that points the way forward to the composer's mature operas. Yende navigated the dizzying heights with her clear, agile instrument, although she missed her first major high note by an audible half step. She improved from there, singing the recitative and final Allelulia with a thrilling command of the stratosphere.

Mahler's Fourth was an apt closer. This is one of the most popular (and most misunderstood) Mahler symphonies. It is written on a shorter scale than his others, and uses a more modest orchestral force. However, it demands the utmost attention to detail for its glories to shine forth. Mr. Thomas brought that pointillist skill to the first movement, which careens between repeated, mysterious sleigh-bells and a scattering of seven different orchestral ideas that seem to tumble over each other in a rush. The joyous climactic moments were played with an innocence needed to make this music work, and small detailed like the transition from a solo bass clarinet to a cello at one point simply glowed.

This precision extended to the second movement, a lurching, off-kilter dance with a haunting fiddle solo that evokes the demonic figure Freund Hein. (It is played by the concertmaster on a second instrument, tuned a step higher to give it a rustic quality.) That sense of menace was palpable, even when the main theme was answered by luminescent wind and percussion that brushed the nightmare back. The Adagio followed, powerful and profound as if the players were taking stock of all the turbulence their company sailed through this season and were preparing to move forward. Its giant brass climax came out of nowhere, rising from the depths to promise a better future.

Yende had arrived onstage at the start of the third movement, enabling her to stand and start singing the fourth with no unnecessary pause. Clad now in celestial white, the soprano sang the moving text of Der himmlische Leben, the Wunderhorn song that evokes children playing and feasting with the saints in the heavenly Empyrean. This promise of celestial reward was delivered with high, clear beauty. And yet underneath flowed Mahlerian melancholy, an urgent theme reminding the listener that all these good things were conditional on those children being freed from this mortal coil. Thanks to Thomas' careful direction, this point was starkly underlined. (Reprinted from Superconductor with permission).