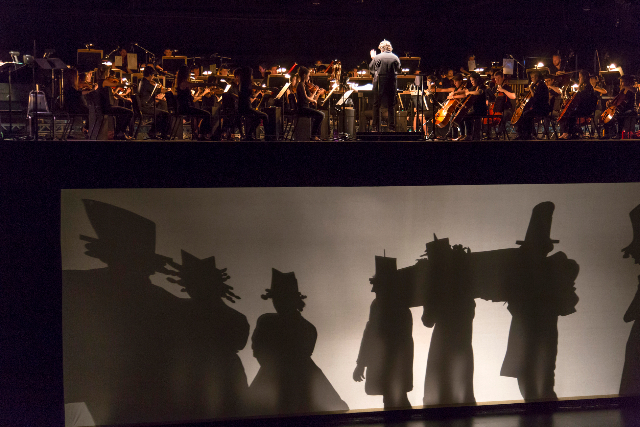 Spoleto Festival USA is currently enjoying its 40th season in Charleston, South Carolina. This festival has established itself as one of the world's major performing arts festivals.

For seventeen days and nights, beginning the Friday of Memorial Day Weekend, Spoleto brings thousands of people to charming Charleston.

This reviewer wishes to preface coverage of a USA Premiere opera of  The Little Match Girl by saying I always try to find the good in any theatrical or musical offering. There are  so many talented people who bring works to us out of love of their craft. For that we have enormous respect and gratitude.

This production,however,  was not my "cup of tea." Surely it was appreciated by those who didn't flee for the exits. People exiting the theatre proved to be a distraction. Frankly, I wished that I was among them but our seats in the nosebleed section made it impossible to make a gracious escape.

It is an obligation for critics to see the entire production they are reviewing. It can prove to be the downside of the profession. There was uproar when a Wall Street Journal stringer wrote that she often does not stay for the second act of less than enjoyable plays.

So I sat crunched up like a sardine in a chair from which I couldn't stretch a leg. It was like flying economy class during an overnight flight to Europe. An aisle seat is a must in Memminger Auditorium. I knew I was going to be there for the standing ovation as the stage was full to the brim with people that made the production possible as well as all the musicians and chorus above me.

Sitting in total darkness for one hour and forty five minutes listening to atonal avant-garde music was torturous to say the least.

I assumed a squinting eye position trying to read the libretto that flashed,  one excruciating word at a time, behind  a screen using not-so-cute shadow puppetry. Having a better tempo would have made this whole ordeal more endurable.

Trust me. I am not the harshest critic of this cutting-edge production.

The opera's saving grace was the staging of the orchestra and chorus on raised platforms almost reaching the ceiling.

One of the benefits of being in the top section was that I could almost reach out and touch the musicians. I could see every movement of the baton of the conductor. We observed unfamiliar instruments that provided the unfamiliar sounds that perhaps might well appeal to an alien.

The Little Match Girl  is based on a short story by Hans Christian Anderson. It conveys the plight of a little girl out in the snowy cold trying to make a few coins from selling matches. It can ring true today. There are street children in third-world countries trying to sell cigarettes to tourists. If these "beggars' don't produce they are terribly abused. This little girl froze to death.

The opera tried to have its audience experience some of the suffering that the little match girl endured. One felt the torturous environment as did anyone with empathy for a young girl's tragic tale.

Helmut Lachenmann's music and libretto was conceived with the knowledge that  "one looks with one's ears and listens with one's eyes."

The 106 members of the Spoleto Festival Orchestra performed the score full of clicks, crackles, knocks and hisses, under the baton of resident Conductor and Director of Orchestra Activities John Kennedy. There was a large chorus with two sopranos that elicited gagging sounds as well as Oh and Ah.

Time dragged in this production.  But, overall, it was good to have such a challenging experience. Thanks to Spoleto Festival USA for having the courage to help us reach beyond the comfortable and familiar.