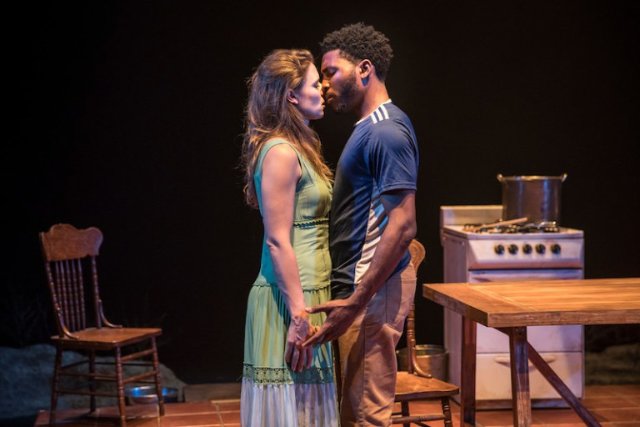 Mies Julie is a scorchingly sexy, shockingly violent adaptation of August Strindberg’s Miss Julie, transported from 1888 to 2012 . Incidents that may or may not happen offstage in 1888 happen onstage in 2012.

In Mies Julie at Victory Gardens Theater, playwright Yaël Farber translates the relationship between a privileged young woman and a servant from Midsummers Eve in to the Karoo, , on Freedom Day in 2012, the day commemorating the end of apartheid. The relationships are similar in Strindberg’s play, but the racial tensions add layers of meaning to Mies Julie. At a time when white Americans are finally realizing we have never come to grips with the horrors of our racist past (and present), it’s electrifying to see similar racial conflicts in a different culture.

Mies Julie is a tense story of a country undergoing political and social revolution, symbolized by the two leading characters: a white woman and a black man. Director Dexter Bullard never lets the tension subside, from the first moment that Julie (Heather Chrisler) and John (Jalen Gilbert) are alone in the farm kitchen. His mother, Christine (Celeste Williams) has worked on the farm since before Julie’s birth. She raised Julie and now she’s mistress of the kitchen and cares for the farmhouse, set on a semi-desert plateau, a dust bowl.

Julie’s mother is dead; her father is away. He is trying to keep the squatters off his land, even though, as John says, “By law they have the right to live here—if their parents did. A storm is coming to this farm. The workers are celebrating Freedom tonight, but there is anger on the wind out there.”

Julie is lonely and bored and wants to go out and dance with the locals who are celebrating. John warns her of the danger she faces alone. She demands that he join her and dance with her. He refuses, knowing the danger of a black man being seen with a white woman. Whether from boredom or lust, Julie persists in trying to seduce John.

A fourth character materializes on and near the stage throughout the play. Ukhokho (T. Ayo Alston) is an ancestor apparition in white seen by Christine. She sings and plays music that adds a mournful and foreboding mood.

The play’s central plotline is the story of Miss Julie and John, but the racial history of land ownership and apartheid looms over everything. Thus the full title of Farber’s play names two key South African laws.

The Bantu Land Act of 1912 severely limited the ability of ’s black population to own land and was the basis for apartheid. The Immorality Act of 1927 prohibited sexual relations between whites (“Europeans”) and people of other races. The playbill includes a brief history of and a glossary of terms. The characters sometimes speak in Afrikaans or Isixhosa, the language of John and Christine’s people.

Bullard’s direction keeps this 75-minute story in motion. The cast is strong, especially the relationship between Chrisler and Gilbert, where the power shifts between her whiteness and his masculinity keep the story in balance until its tragic end. Williams is excellent in portraying Christine.

Mies Julie is performed in the naturalistic farm kitchen, described by Strindberg as “a room with the fourth wall removed.” Kurtis Boetcher is responsible for set design with Diane Fairchild handling lighting and Stephen Ptacek sound design. Kristina Fluty is the intimacy and violence choreographer. Dialect coaching is by Phil Timberlake.

Mies Julie continues through June 24 at Victory Gardens Theater, 2433 . A variety of public programs is planned around the production. Tickets are $15-60 for performances Tuesday-Sunday. The play is recommended for mature audiences, age 18 and above.