Everything's Up to Date 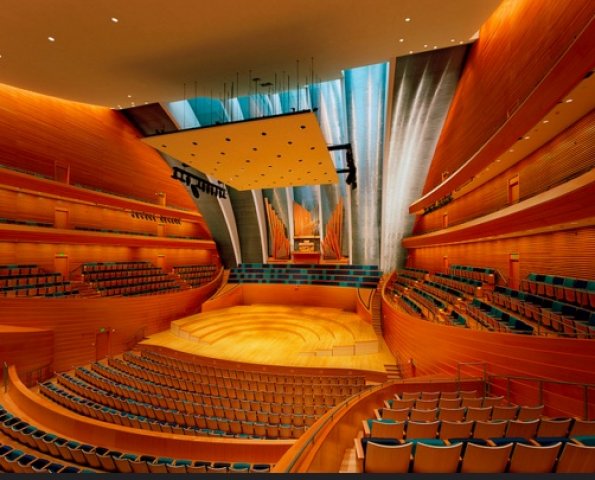 Helzberg Hall in Kansas City. One of the acoustical wonders of the world. 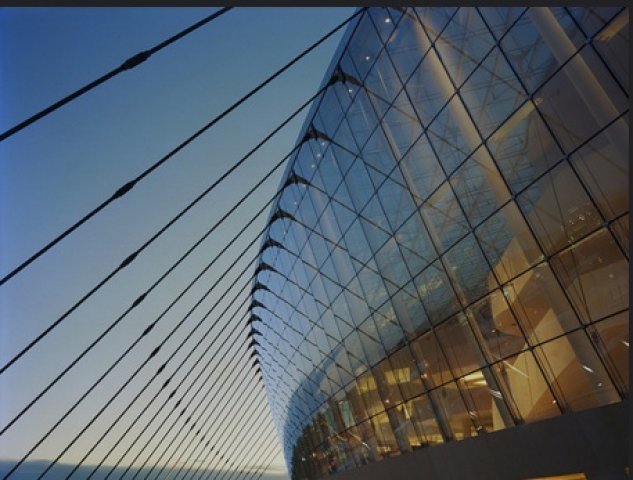 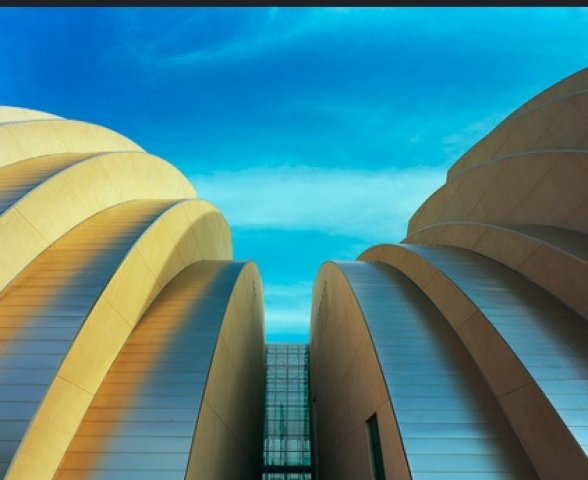 Two groups of arches hover above the two performance spaces. 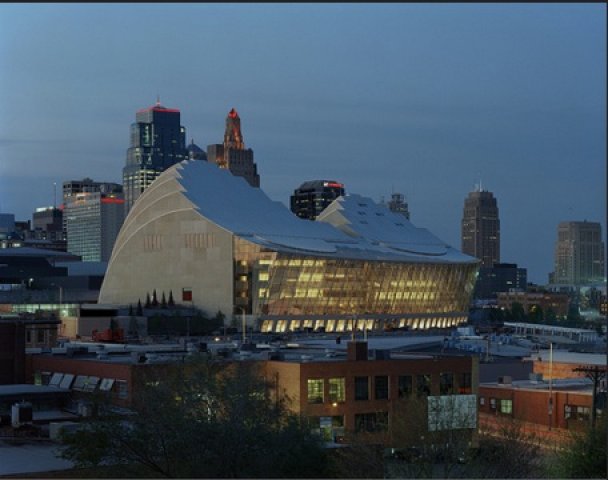 Perched on a hill like the Philadelphia Art Museum, the Kauffman Center is embedded in Kansas City.

Yasuhisa Toyota, acoustician of Helzberg Hall and Disney, Bard, Helsinki, Hamburg and so on.

The Kansas City Symphony is a group of superb artists, who make their home in one the of the performance treasures of America. Like Dallas and other smaller cities across the country, Kansas City community leaders decided to spiff up its arts presence, A decade ago they determined to build a new home for its Symphony Orchestra and a somewhat larger hall for events on tour.

A lead group visited cities across America that had also undertaken this challenge. Problems and solutions were apparent. One city forgot to provide electricity in its lobby area and had to bring in generators until the problem was cured. Another forgot to build restrooms. Yet, like all venues that anticipate housing first-rate musical artists, acoustics became the top concern. Yasuhisa Toyota of Japan, who had designed the acoustics of Disney Hall in Los Angeles and the Fisher Center at Bard College, was hired. What Toyota had learned from working with Frank Gehry was flexibility. The lessons are amply rewarded in Helzberg Hall, where both orchestra members and audience experience clear tones created in part by long echoes. Gustavo Dudamel of the Los Angeles Symphony, on a conducting visit to Kansas City, declared that Toyota had outdone himself.

Vineyard seating is one of the pleasures of the hall. The seating surrounds the stage. Human beings contribute to the sound quality. Rows rise up in the terraces like vineyards. There is not a bad seat in the house.

Like Russell Johnson in Dallas, the acoustician Toyota got the final call on design in service of sound quality. He and architect Moshe Safdie worked well together. The interior woods resemble those of Disney and Bard. Toyota regards the wooden floor on stage as an instrument. Curiously, ceilings and floors contribute more to the quality of the sound than walls. In Helzberg, paneling and partitions are golden honey colored wood.

Like Disney, which is larger by 665 seats, Helzberg feels intimate with 1600. A giant organ dominates the hall like an altar. The organ is the orchestra of instruments, and its steel pipes, all 5,548 of them, are fronted by pipe-like wooden verticals, an offering and a bouquet. The largest steel pipe is 32 feet tall and weights about 960 pounds. Motor-driven risers on the stage offer four different seating levels above the main stage for the orchestra

The main lobby, Brandmeyer Great Hall, is built of a glass ceiling and sloping glass walls that provide a panoramic view of Kansas City to the south.

What do each of these elements mean to the performers and to the audience? Kansas citizens love coming to the Hall. Its namesakes, Shirley and Barnett Helzberg, encourage each person who comes (and they seem to know and be known by all of them) to look at the Hall as their own.

The first piece the orchestra performed under guest conductor Johannes Debus displayed magnificent orchestral tones as they reverberated through the hall and surrounded us. It was an orchestral arrangement of music from Richard Wagner’s Ring cycle. An admirable effort, but one that did not make a case for itself hard as the conductor and orchestra tried. Perhaps overtures and one act performed in its entirety serve the composer better as a soupcon, an introduction, or a sampling of his style. We got to hear fabulous horn sounds, including a bass trumpet, and also sweet strings.

In the familiar, yet fresh Emperor Concerto of Beethoven, the orchestra displayed lovely woodwind tones. The strings swooped and soared. Young pianist Martin Helmchen thrived as the orchestra’s partner. None of the crashing bravura of past Emperor performances. Instead we heard a subtle range of dynamics. The grand sequences were not forced or tempestuous beyond their construction.

Particularly in the quiet moments, Helmchen dared the audience and the Hall itself a pick of the quietest of beautiful phrases. We were amply rewarded.

Helmchen is a special artist with a delicate touch, even when he is pounding out the big moments in the concerto. He never shows off. Instead he uses the same grace that he brings to barely audible phrases which are even sweeter because you lean in to hear them.

A Hall like Helzberg is perfect for instrumentalists of subtly and allows them to express a wide range of dynamics without concern about being heard at the quiet end of the spectrum.

The future of classical music is secure in Kansas City. The full meaning of a community of performers and listeners has been understood by all parties to this dance. Let’s hope we can get the Kansas City Symphony to test Carnegie Hall’s acoustics in the near future.