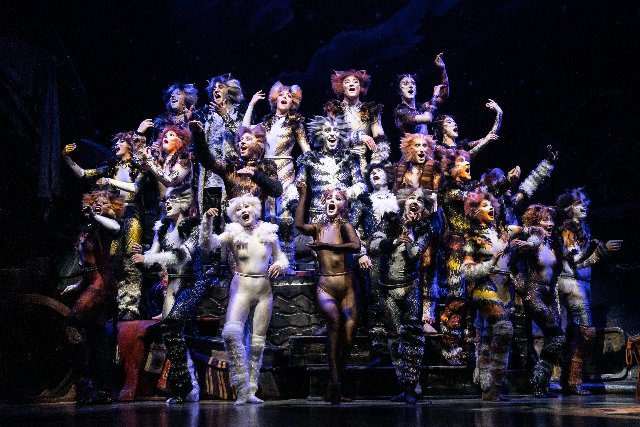 “Cats.”  It’s really a different breed of – cat.  On its opening at London’s West End in 1981, its radical, never-before characteristics created an immediate buzz.  Its cast is fully anthropomorphized.  It is sung-through in the fashion of grand opera.  Its lyrics are based on poems for children by a Nobel laureate in literature.  Except for a few moments, its diverse choreography and movement is non-stop.  And a plotline is largely lacking, with each song acting as its own separate drama.  Finally, marketing of the musical relies on the visual of the cat’s-eye logo rather than promoting the performers or posting pull-quotes from reviews.

Who could predict that such a musical would set performance records for both the West End (21 years) and Broadway (a mere 18 years)?  But innovation doesn’t put butts in seats.  So, what propelled “Cats” to immortal fame?

Spectacle!  As the world’s first megamusical, “Cats, and this touring production” fills the eyes and ears with delight.  The scenic design is phantasmic with brilliant shifts in lighting; use of billowy stage smoke; a large seemingly levitating disk; and a very detailed set.  The stage is often filled with two dozen performers adorned in resplendent cat costumes of various ilks.  There is a fluffy, fat, black cat, and a shapely white cat with shaggy legs, and a sleek gray cat, but there are mostly a variety of distinctive striped cats.  They move around the stage almost continuously, crawling and writhing, and best of all, dancing, and doing it quite well.  There are many elements of modern dance, but also fine ballet, particularly by Mistoffelees, with stunning leaps and spins, and even an energetic rat-a-tat tap number led by Jennyanydots.

“Cats” composer Andrew Lloyd Weber pens an eclectic mix of background styles to complement the poetic lyrics.  Except for perhaps the Jellicle theme, few of the tunes stand the test of memory, though the music is effective and often uplifting, fitting the situations of the songs well.  But with “Cats,” Lloyd Weber began a strategy of creating a single tune that could be lifted out of the context of the storyline and pushed for Top 40 music commercial success, thus promoting the show.

That song is the luminous “Memory.”  Although the situation of the haunting and melancholy song is about Grizabella’s separation from the tribe of (fictitious) Jellicle cats and a plea for acceptance, the neutral lyrics make it a universal.   Trevor Nunn’s alluring adaptation of T. S. Eliot’s poem is even superior to the original, creating a very special meter and rhythm that enhances the words and makes the music sing.  The achingly beautiful song closes Act 1 and is reprised in different ways in Act 2.  Happily, the final rendering by Grizabella with a little harmony assist from Sillabub, is a showstopper, because the previous ones on opening night were not memorable.

The musical is full of interesting and distinctive characters whose cat lives map onto human ones.  Each is portrayed with great skill, as if the performer benefits from a collective unconscious of the role having been played thousands and thousands of times all over the world.  Every theatergoer will have their own favorite cat.  There is the wise Old Deuteronomy, the gigantic and respected leader of the Jellicle cats.  Maybe it’s Gus, the Theatre Cat, whose doleful appearance hides a past as a star revealed in his nostalgic reflections.  Or maybe the colorful orange-striped Mungojerrie and Rumpleteaser, the roguish pair of thieves who ransack houses.

“Cats” is an audience pleaser, especially attracting younger people to the theater.  Akin to “Rocky Horror Show” a cult of “Cats” lovers exists that see the show multiple times, and their enthusiasm does add to its ambiance and appreciation.  The show has its detractors, largely because of the lack of continuity and cohesive narrative.  Its signature song seems to spring out of nowhere.  And though the performances are totally professional on the whole, there are occasional weak links.  But its assets make “Cats” a unique theatrical experience worth the price of admission.  The current touring production carries on a tradition that will have legs for a long time to come.

“Cats,” with music by Andrew Lloyd Weber and lyrics based on “Old Possum’s Book of Practical Cats” by T. S. Eliot, is produced by Troika Entertainment, presented by Broadway SF, and plays at the Golden Gate Theatre, 1 Taylor Street, San Francisco, CA through June 5, 2022.