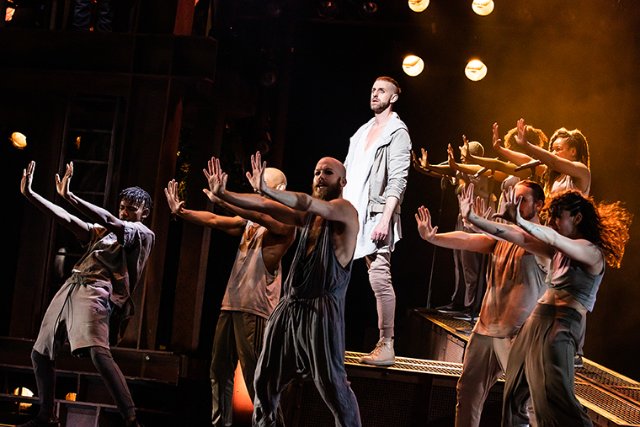 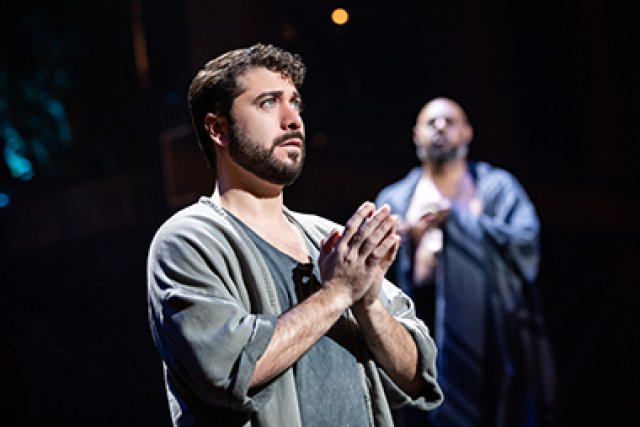 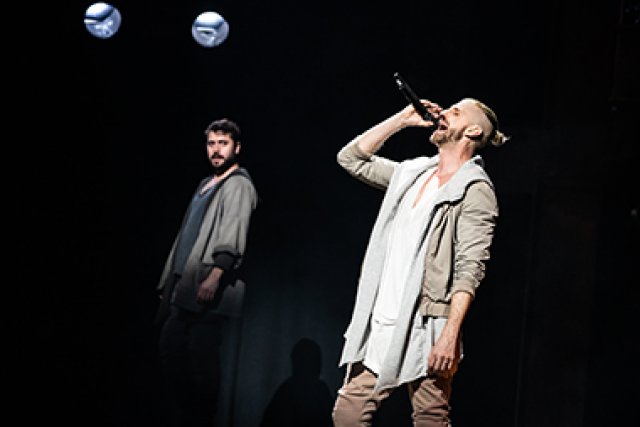 Andrew Lloyd Webber and Tim Rice’s glorious music is front and center in the moving and intense, yet sometimes frustrating 50th Anniversary equity national touring production of Jesus Christ Superstar. It is playing in Miami through Sunday. The venue is the Adrienne Arsht Center for the Performing Arts of Miami-Dade County.

It is a spare production, allowing us to focus on the music, characters, and the rather thin story. For instance, a platform in the shape of a cross is one of the only items onstage resembling a set.

Perhaps in an effort to emphasize the music, band members are onstage and in full view. You will spot them in a two-level tower-like area that takes up part of the playing space. Speaking of musicians, it is sometimes hard to distinguish band members from actors. That is because performers playing major characters also play guitar while singing into a microphone. Sometimes, the actors perform in the same space that band members occupy.

But if this production often feels more like a concert than a musical theater piece, that may have been the intended effect. After all, this mounting of Jesus Christ Superstar pays tribute to the show’s origins. Originally, it was a concept album. This production honors the historic 1971 Billboard Album of the Year.

Chances are, many will recognize the characters from the New Testament. To be specific, Jesus Christ Superstar takes place against the backdrop of events during Christ’s final weeks, as seen through Judas’s eyes. As the show opens, he is not satisfied with the direction in which Christ is steering his disciples. As one of them, Judas feels torn as to whether he should betray Jesus.

Sound is a problem. In particular, too often on opening night in Miami, it was hard to understand the lyrics. That could be the performers’ fault. Or, perhaps sound designers Keith Caggiano and Nick Lidster need to ensure that audiences can understand the performers. Then again, perhaps the musicians need to play softer. Regardless, this is one problem that needs fixing in an otherwise strong production. It features forceful, yet believable acting, singing, and dancing.

Speaking of him, Aaron LaVigne’s human, relatable Jesus exudes peace, sincerity, and humility. When necessary, LaVigne amps up the intensity, while still believably conveying emotions such as irritation and anger. Playing such emotions enhances Jesus’s humanity, as does the everyday clothes he wears (Tom Scutt designed the costumes). As Jesus, LaVigne wears a man-bun. This enhances the character’s individuality. It is hard to watch Jesus at the end of the show. That is when a bloodied, glitter-splattered Jesus, on all fours, tries to move but can barely do so.

Jenna Rubaii gives us a sympathetic Mary Magdalene. This is particularly true when she sings a soothing rendition of “Everything’s Alright.” Rubaii’s Mary is also credibly torn while singing the ballad, “I Don’t Know How to Love Him.”

Even if we cannot make out all the lyrics, we never doubt the emotions that the energetic, triple threat performers convey.

This production, under Timothy Sheader’s assured direction, does not have a specific setting. However, it carries a modern look and sound. Perhaps to emphasize Jesus Christ Superstar’s relevance to today, Sheader has the actors enter from the audience.

You do not have to be religious or knowledgeable about the New Testament to find meaning in Jesus Christ Superstar. With timely and timeless themes such as love, devotion, friendship, mob mentality, fame’s toxicity, celebrity, and betrayal, the show, often called a “Rock Opera,” carries a universal appeal.

The 50th anniversary touring production of Jesus Christ Superstar continues through Sunday at the Adrienne Arsht Center for the Performing Arts of Miami-Dade County. Its location is 1300 Biscayne Blvd. in downtown Miami. To get tickets, and to see a video clip from the production, go to https://www.arshtcenter.org. For more information about the touring production and its upcoming stops, go to https://ustour.jesuschristsuperstar.com.