Begin the Beguine: A Quartet of One-Acts 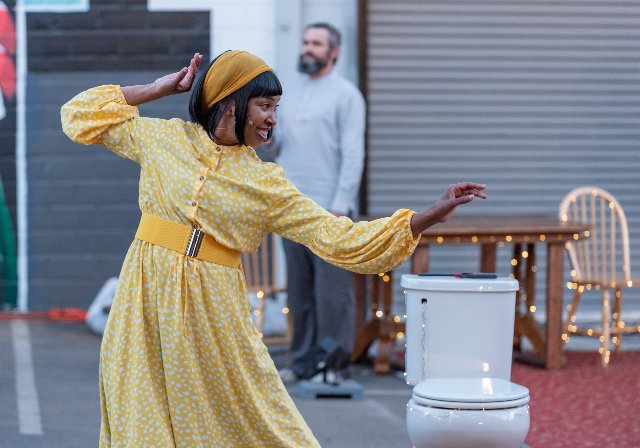 One can only imagine how many treasure troves of artistry lie hidden away around the world in dusty attics and musty cellars.  Nina Collins, daughter of playwright and poet Kathleen Collins, has collected and released a rich reserve of her late mother’s previously unpublished works from the 1970s and 1980s.  Included are four short plays that, while they are uneven, and despite their age, resonate today.

Like Kathleen Collins’s predecessor and inspiration, Zora Neale Hurston, who is referenced in “Begin the Beguine,” Collins’s work was largely unrecognized in her lifetime.  Two films she wrote and produced were seen only on the festival circuit, with no commercial distribution.  However, in the last several years, her “Losing Ground” from 1982 was released in various home electronics formats.  In 2020, the National Film Registry of the Library of Congress designated the movie for preservation as being “culturally, historically, or aesthetically significant.”

Participating in a joint world premiere with Performance Space New York, Oakland Theater Project presents the quartet live, viewed by the audience in these pandemic times from their vehicles and heard through FM radio feed.  Vehicles are parked only one-deep on three sides of the performance ground, so that the audience has unobstructed views as if from mid-orchestra around an outdoor thrust stage.

Michael Socrates Moran and Dawn L. Troupe co-direct, and the latter plays the lead role in each play.  Ms Troupe’s passion for the project is evident in her commanding performances.  Her four characters are not defined as comprising one identity, yet, a complex, archetypical profile derives from the aggregate.  She must convey a wide range of emotions from reverent to hostile to sassy.  She is aloof, alluring, and uncertain in defining a composite personality.

It is not disclosed whether the plays were intended as a set, but together, they possess a symmetry in which the whole exceeds the sum of the parts.  Taken as one, they plumb the psyche of a black woman, or a group of black women, if the viewer rejects the notion of four phases of a single character.  The opening play is a soliloquy, while each of the remaining three have two significant players.  But in each, the two characters are variously distinguished by contrasts in race, gender, and/or age.  A professional or artistic black woman is central to each.

“Reflection,” the most universal and existential of the plays, confronts us at the outset.  The black woman could be any ethnicity or gender as she confronts daily life and tries to find God.  As a dancer and a housewife with daily chores to complete, she tries to reconcile the different lives she leads, wondering which one is real.  The main concept in this play is of timeless interest, but consistent with the problem itself, the play offers no conclusion.  This thread runs through the one-acts and may be unsatisfying for those looking for closure from stories.

Most animated, conflictual, and interesting is “The Reading.”  Two women, one black and one white, await appointments with a psychic.  The sociable and uninhibited white woman probes and expounds and begins to reveal stereotypical racial thoughts, while the black woman parries and condescends.  Yet in the end, she, too, lets down her guard and shares her own inner thoughts.  When the women learn that the psychic will have time for only one reading, which woman will it be, and why?

Most opaque is the eponymous third play, “Begin the Beguine.”  A middle-aged actress engages with a younger man in a park.  At first, it seems that he is her son, but the relationship becomes increasingly ambiguous to the point that he becomes every man.  Her inclination to perform on and off stage is evident in her storytelling, but what does this say about her being?  Is she trapped on a treadmill, or is she released?

In the final episode, “The Healing,” the black woman receives laying-on-of-hands treatment from a white therapist.  Their fractious session evidences the divide between his offer of faith healing, a solution without reference to cause, versus her organic need to understand why it is that she hurts.  Along the way, racial tension is heightened as she willfully breaks a rule of propriety and he participates in a naive act that may be perceived as a precursor to what we now consider appropriation.

Kudos to OTP for devising ways to bring live theater to its audience.  The staging of these four one-acts is simple, accented by attractive decorative lighting.  The acting, mostly by company members, suits the material.  Nonetheless, the plays would benefit from production in a more traditional environment.  As a corollary to our time, observing a play from a car is a bit muffled, like breathing through a surgical mask, yet it certainly serves it purpose.

Through the series of incidents, we do gain understanding, as well as empathy, for this multidimensional woman.  Each play possesses its own internal motivation and noteworthy development, but typical of such compilations, it lacks connection to provide a true dramatic arc.  Minor adaptations to the texts could help facilitate connectiveness.  Nonetheless, these works represent a notable artifact from an underappreciated author, and an interesting viewing for those drawn to this type of material.