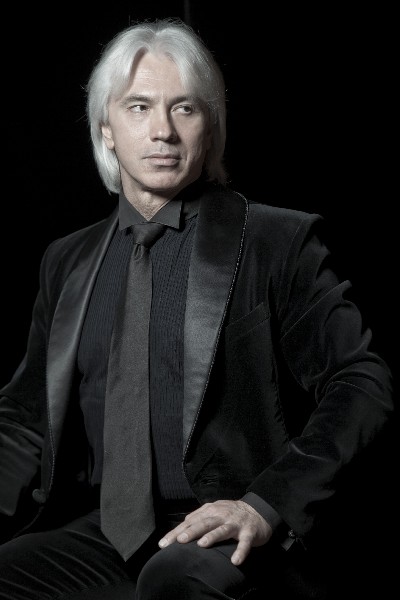 The Russian opera star baritone Dmitri Hvorostovsky put on a thrilling recital Thursday night at Jordan Hall, turning each of his program’s short songs into little dramas, putting to full use his natural instincts as a singing actor. As another recent recital demonstrated, a program devoted to songs in one language with little emotion range can get a little boring, but Hvorostovsky never held back in communicating his understanding of the text and music he was presenting at the moment. And in each song, he was very much in the moment. Yet, he never overacted; he never exaggerated what was in the text but explored every nuance of feeling and meaning in each of the songs.

The dominant emotion the songs expressed was melancholy. Hovorostovsky sang only five Tchaikovsky songs, but they set the tone for the recital. And the songs that followed by Rachmaninoff and his near contemporary Nikolai Medtner were hardly laugh-fests, although Rachmaninoff showed a lighter touch in a couple of songs. Tchaikovsky’s songs have been dismissed as being Johnny-one-notes of mournfulness, but as the turn-of-the-last century opera scholar Ernest Newman wrote about Tchaikovsky, “there are more shades of melancholy than one,” and Hvorostovsky painted each and every one of them.

There is no classical song literature more soulful than the Russian. I suppose that’s a cliché, but it’s true. Certain peoples, products of history, culture, climate, possess a soulfulness that other peoples can only marvel at (or dismiss as unfriendly to business). African Americans have it, Neapolitans have it, Brazilians have it, Russians have it. Is such thought unfashionably essentialist (and thus highly debatable)? Yes, but can we deny it? Not so easily.

Like most songs in any language, the dominant theme was of love – love wished for, love won, love lost, mostly in the first and the last categories. But the Russian song literature, a characteristic it shares with the German, also richly evokes nature as a correlative to love’s longing. Tchaikovsky’s “I bless you forests,” to a poem by Aleksei Tolstoy, a story sung by a homeless person, begins, “I bless you, forests, valleys, fields, mountains, waters,/I bless freedom and blue skies.” And it ends with the wanderer exclaiming, “O! If only I could embrace you all,/Enemies, friends and brothers, and all nature,/And enfold all nature in my arms!”

The recital opened with Tchaikovsky’s “At Bedtime,” set to a poem by Nikolay Ogarev. (Other poems set to music by the three composers included works by Pushkin, Goethe and Lermontov.) It was a strange song to open a program. Its opening line evokes sleep: “Nocturnal dark brings the silence/Now calling me to rest.” Later in the song, the poetry goes “Give peace to man.” It’s perhaps crazy to seek extra-musical messages in songs written more than 100 years ago, and maybe the recital was devised many months ago, but I couldn’t help but think of the current crisis in Ukraine. During the years of Soviet oppression, artists proved adept at slipping messages into their works. Maybe Hvorostovsky, who toured Russian cities in 2005 at the invitation of President Vladimir Putin, was doing the same thing here. Maybe not – next week he’s giving a concert in Russia titled “War Songs” - but by positioning the otherwise innocuous song at the start of his program instead of at its end, where it would have made more sense thematically, it did raise questions – at least with me. Otherwise, there was no protest against current Russian policy as there has been at recent performances in New York and other cities. And Boston’s Russian community turned out in force.

Hvorostovsky, now 51, was one of the great singers to come out of Russia after the Soviet Union dissolved into a dozen or so independent states. The other two most prominent of those singers were soprano Anna Netrebko and mezzo Olga Borodina, who both also went on to become international superstars. They were accompanied by their Svengali, the conductor Valery Gergiev. I was lucky enough to hear them all sing in their early primes in San Francisco, where San Francisco Opera director Lotfi Mansouri was quick to move when he realized a new crop of extremely well-trained Soviet singers and conductors were available to western opera houses. I remember a delirious evening when all three of them sang together in Rimsky-Korsakov’s “The Tsar’s Bride.” I pinched myself when I realized what an extraordinary experience it was: the three greatest young Russian singers performing together in San Francisco! It lasted only a few short seasons. The Met, lumbering like the great beast it is, realized what Lotfi was doing, and lured Gergiev and his singers away.

The singer who was promoted at the time as a Siberian, was only about 30 then and in his vocal prime. He already possessed the mane of white hair that helped make him a matinee idol among opera fans. (He did a controversial “Don Giovanni” – he portrayed the great rake as a joyless rapist – in which he sang the “Champagne aria” shirtless before showing flesh on stage was de rigueur for young singers.) And his voice was a revelation. Light for a baritone, he had silvery high notes as well a full resonant low notes, and he brought his roles to life with his rich and expressive voice.

Now, he is a mature singer. His voice is bit thicker and his high notes – which he still hits without any sign of force – are not so silvery. But his ability to communicate the meaning of what he is singing is even more profound. It is a frequent sadness hearing singers who understand their material better than ever try to put it over with a flawed instrument. But Hvorostovsky doesn’t have that problem: His instrument remains superb at an age when many of his peers are retiring or moving to pop music, Natalie Dessay and Deborah Voigt, both of whom recently sang here, also under the auspices of the Celebrity Series, cases in point. May he live to sing into his ‘70s, like the peerless Placido Domingo!

Let me cite just one moment that drove the audience to frenzy: his long, drawn-out note that accompanied the Russian word “otdokhnjosh” in Medtner’s “The wanderer’s night song.” Most of us can’t breathe that long without a break, never mind spinning out flawless vocal tone.

Throughout, Hvorostovosky, who wore a knee-length black coat with sparkly lapels, his legs spread like a Russian stud, was accompanied by Ivari Ilja at the piano. Sometimes stolid, with many splayed notes, Ilja rose on occasion to eloquence. In Tchaikovsky’s sublime “Nightingale,” to a text by Pushkin, he supplied the requisite trills with swooning poetry.

Demonstrating both his showmanship and his understanding of his structure of a vocal recital, unlike both Dessay and Voigt, who sang encores that were little different from the meat of their programs, Hvorostovsky surprised his audience with two Italian encores. His first, Iago’s nihilist “Credo” from Verdi’s “Otello” highlighted his skills as an opera singer. Who cares if he was accompanied only by a piano rather than a full orchestra? Hvorostovsky was electrifying in his expression of malevolence, which provided quite a contrast with the gentle melancholy of the preceding recital. And to top it off, he sang a Neapolitan song with exquisite soul, a singer from one soulful culture acknowledging another. Bravo!