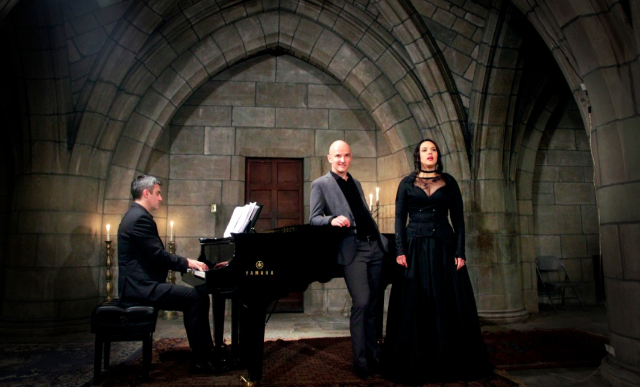 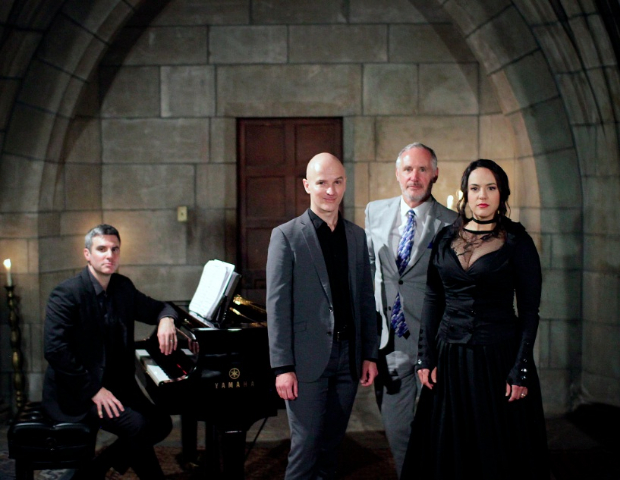 Everything about The Crypt Sessions combines the pleasure of intimacy with the sense of awe and majesty music can convey.

Just before the concert began, a Yamaha staff tuner exited the church on his bike, head topped with a guard and smiling. Pianos that Yamaha hauls down the stairs of the church to The Crypt are tuned to perfection.

The air is expectant in The Crypt as Kevin Puts takes his seat at the piano to accompany Daniela Mack in moving lullabies by Benjamin Britten.  Mack sweeps down the stairs and into the consecrated arches in an Edith Wharton dress, black from head to toe with puffed sleeves and a tight waist.  She could have stepped from a carriage in The Age of Innocence, but she is not innocent at all.  Mack has the wise sensibility of another Wharton character, Judy Trenor. Fay Eva is credited with Mack's perfect costuming.

The Argentinean mezzo, who sounds like a contralto, has a lush rumbling of her lower chest which few singers can draw upon.

The accompanying pianist is one of the country’s leading contemporary composers of opera, Kevin Puts. He remarked that he had often accompanied singers as a student, but now that he is composing, performing the works of Britten and Poulenc, he knows that every detail they have placed on the page is for a purpose. Puts now attends as a member of a hallowed group, a younger and live member to be sure, but someone who senses he has been placed before the keyboard to honor them.

As the Britten lullabies begin, you think of nothing but a mother’s tender, anxious thoughts about her baby.

Joseph Gaines is a tenor who seems to be able to do anything. He can change his voice within an aria, and use notes to create character. Gaines also can sing perfectly beautifully, which he did in Francis Poulenc’s Tel jour telle nuit.  Visually he hunkers into himself at the end of a song, and then erupts up and straight as he begins anew.  He is sinuous, physical and finds humor where he can.  Both Mack and Gaines are gifted actors. Mack also sang Dido's Lament from the Henry Purcell opera as an encore. Andrew Ousley, who creates these events, had three special pieces of music in mind when he dreamed up this series.  The Purcell was one of them and Mack delivered it full of passion and feeling.

Since 1900 American opera companies have produced more than 950 new operas, half them in the 21st century. Mark Campbell, who with Kevin Puts won a Pulitzer in 2012 for Silent Night, has written many of the librettos. Excerpts from the new Puts/Campbell opera premiering at Opera Philadelphia in September make clear why. Campbell has a lovely sense of words, their fit with music and meaning, and their place in the human voice. He constructs compelling drama and his words are full of the meaning and emotion of the context. Even more specially, he has an ear for “down below,” “smeller, cellar”.  English can be awkward in the voice, but not as it is used by Campbell.

Puts has a chance to display his talent at capturing different voices in his new opera, Elizabeth Cree.  Elizabeth’s opening aria pictures a difficult childhood and the murder of her mother with a sewing needle. Puts contrasts voices with character. A night club song is raucous.  The texture of the orchestration suggested by the composer at the piano gives us Bluebeard horror, Karl Marx’s theories, and dance hall at play. The singers naturally become their roles because they are so well written by Puts and Campbell.

The audience was rapt.  These events have become a must for New Yorkers.  A Facebook posting at 3PM on the afternoon of the concert, previewing the music, got 100,000 hits within the hour.  If you couldn't make it to the Crypt, try Facebook.