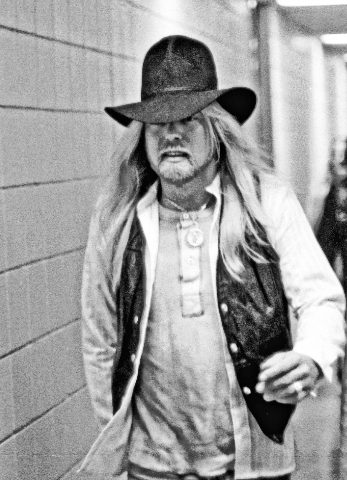 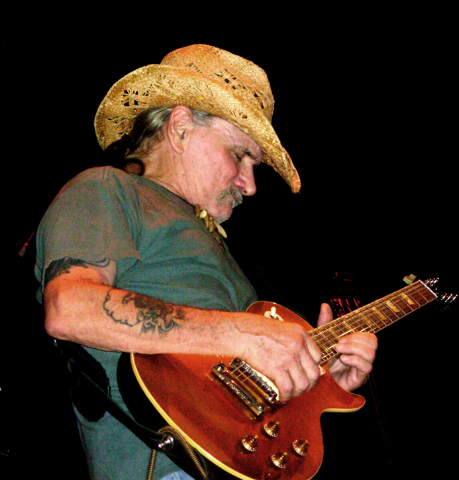 Dickie Betts, shown here at the Colonial, took more of a lead role in the band after Duane died.

On tour to promote their debut album on Capricorn Records "The Allman Brothers" they were an opening act at the Boston Tea Party in 1969.

Before the music industry went corporate the media and insiders had easy access to the green room upstairs on Lansdowne Street.

There was a side door and gatekeeper. Club manager, Don Law, from his desk would check the individual and nod.

The refrigerator was stocked with beer and the men's room down the hall was a place to  pee and toke.

The band was up from Georgia bringing with them a first wave of  Southern Rock with its unique blend of blues, roots, country and jazz.

They were an immediate hit with the audience that night.

It provided an all too brief exposure to lead guitarist, Duane Allman, widely regarded as among the best of his generation. At the age of 24 he died in a motorcycle accident in 1971. Almost a year later bass player, Berry Oakley, was also killed when riding his bike in Macon, Georgia.

The glue that held the band together was provided by Gregg on Hammond organ. He also sang in a range from plaintive, bitter sweet ballads to down and dirty, grinding blues.

Duane traded licks with guitar player Dickey Betts. In addition to the bass of Oakley they featured a kick-ass, double header of drummer Butch Trucks with a conventional kit and conga player Jai Johanny "Jaimoe" Johanson.

More than just a blues/ rock club band from the get-go they were writing their own material as well as putting unique twists on blues standards. That night they stretched out on "Whipping Post"  and "Dreams." Other songs were "Midnight Rider," Gregg's signature ballad "Melissa," and "It's Not My Cross to Bear." Abridged as "My Cross to Bear" was the title of Gregg's 2013 book.

Initially, there was a challenge for the band to carve a niche with a musical style which was more down home roots than top-40 mainstream.

Having scored in their audition Law, who had a good ear for booking talent, invited them back for another gig.

With nothing else on the calendar, and facing the expense of going home and back, the band opted to hang out. They soon became a presence on the scene. Similarly, Van Morrison was also hunkered down and they were all jamming with Peter Wolf and the J. Geils Band.

At the time there were free Sunday concerts on Cambridge Common. Often bands that played the Tea Party that weekend fell by to jam.

It was a transitional era for an emerging Boston rock scene. With blues roots the Allmans proved to be a perfect match. Soon they were on perpetual tour and often seemed to be criss-crossing with the Geils band.

The band broke out with an iconic live double album "At Filmore East" in 1971.

There was a tantalizing taste of what might have been when Duane joined Eric Clapton's band Derek and the Dominos for the iconic album "Layla and Other Assorted Love Songs" released in 1970.

Just prior to forming that short-lived band Clapton appeared at the Tea Party on the road with Delaney and Bonnie. The band was smacked up and took forever to get on stage. To fill-in Clapton jammed with Joe Walsh of the James Gang (later The Eagles) and Peter Green a founder of Fleetwood Mac. It was a night to remember.

That jam session of three historic rock guitarists occurred because of serendipitous bookings. Fleetwood Mac and the James Gang performed February 5 to 7. Delaney and Bonnie & Friends appeared on the next two nights. The Delaney and Bonnie tour was such a mess that Clapton soon defected. My musician friend Opie told me that he caught them with Duane subbing for Clapton. The band dissolved not long after and just dropped off the edge of the universe. Hey man, rock 'n' roll.

With the death of first Duane, and then Berry, the band opted to continue and endured as a touring band. Betts took more of a leading role and they continued to make albums. A couple of years back Betts and his band performed at the Colonial Theatre in Pittsfield.

With a compelling mane of long blond hair Gregg was one of the most charismatic and gorgeous rock stars of his generation. Seated at his keyboards, however, he was more of a role player than flashy front man. Making music seemed more important to him than celebrity.

For a time he was married to Cher but ultimately that was not his scene. Life on the road took its toll and there were bouts of rehab and, in recent years, chronic illness. He was 69 when he passed.

A particular memory was the Easter weekend Mar y Sol rock festival in 1972. I did an advance story for the Herald Traveler. The promoters invited several journalists to fly out of New York. I went with my pal, Kenny Greenblatt, a salesman and scene maker from WBCN.

It was close to midnight when we landed in San Juan, Puerto Rico and boarded a school bus for what proved to be a long ride into the jungle. A cane field had been cleared and a stage set up. There were few if any amenities.

We arrived in time for the Allman Brothers set the last on that evening's program. The MC announced "Stick around they will be back to jam tomorrow."

Stuck in the middle of nowhere we hit the dirt and hunkered down. At dawn the blazing sun soon burned off the low hanging morning fog.

Deciding not to hang around in a scene that was getting ever more ugly we hitched back to the airport where we caught a flight to The Virgin Islands.

We ran into the Allman Brothers who were on their way out of town.

Back in Cambridge, at Cardell's, Wolf said "Why did you split man? We were hanging just up the road at a beach hotel."  Oh well.

At first light sitting here thinking of beautiful Gregg and that sweet bird of youth on Sunday morning of Memorial Day weekend.