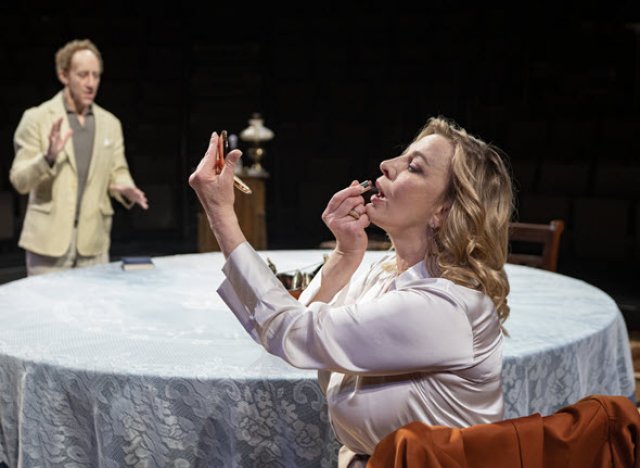 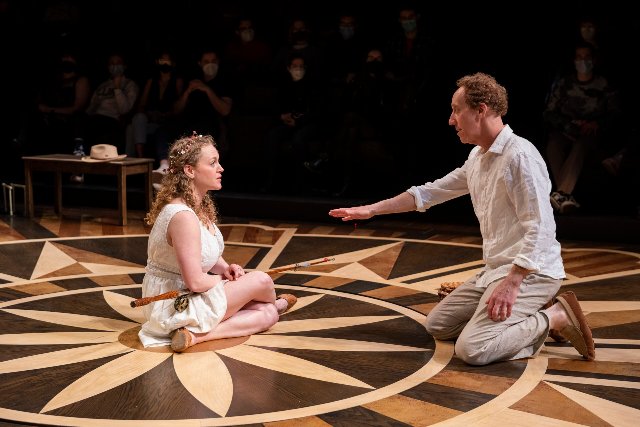 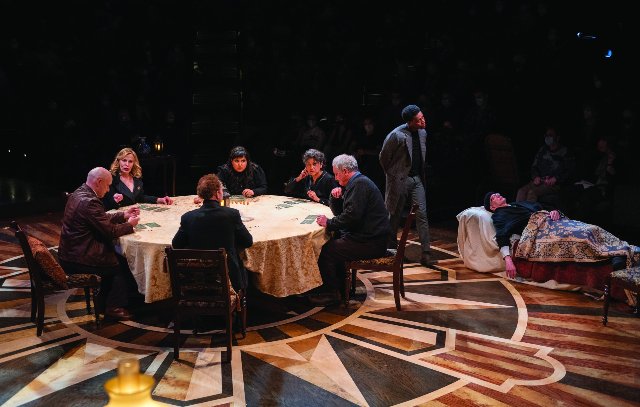 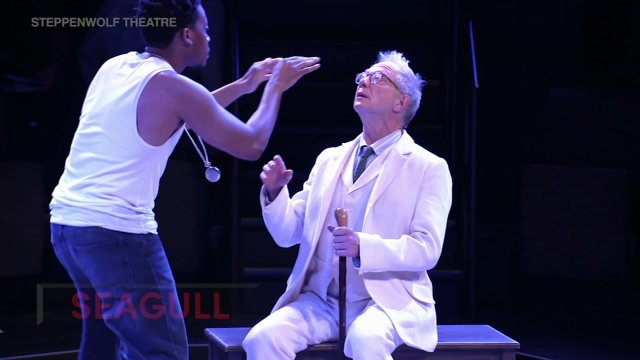 It’s a Chekhov play, so ….. Everyone is in love with the wrong person. Everyone is unhappy. Everyone lives in the country but yearns to live in the city.

Steppenwolf Theatre’s new production of Seagull—adapted, translated and directed by Yasen Peyankov—is set in a large country house in the Russian countryside. The time is indeterminate and the dialog is modernized. But it’s still Chekhov, so everyone is miserable.

Seagull is quite at home in Steppenwolf’s new Ensemble Theater; designed in the round with six rows of seating, all seats are good seats. The stage layout makes scenic design minimal by necessity but Todd Rosenthal’s set design uses the space inventively. A circular form in the inlaid wooden floor rises up to become a stage or platform when Nina (Caroline Neff) performs in the new play-within-the-play by aspiring writer Konstantin (Namir Smallwood) in act one. Then a floral-shaped overhead sculpture flies down to encase Nina as she performs. In act two, the platform rises again to become a large round table for cardplaying and dining. This use of hydraulics makes the stage-in-the-round more versatile. The dramatic lighting design is by Marcus Doshi and sound design and original music by Pornchanok Kanchanabanca.

Seagull, adapted from Anton Chekhov’s 1895 play, The Seagull, dramatizes a clash between the romantic writing of the popular writer Boris Trigorin (Joey Slotnick) with the abstract or symbolist plays that Konstantin writes in his quest to create new forms of theater. In act one, Trigorin describes how he is obsessed with writing story after story and can hardly wait to write again, while in act two, Konstantin is even more frustrated as a writer than he was in act one. Chekhov referred to this play as a comedy, even with its tragic elements, but Steppenwolf does not forego the comedy aspect with its poster showing a bird, a gun and a BANG ribbon flowing out of the gun barrel.

There’s also a contradiction in the acting styles of the ingenue Nina compared with the successful but fading actress, Irina Nikolaevna Arkadina, Konstantin’s mother (played by Lusia Strus). Jeff Perry, one of Steppenwolf’s founding members, plays Peter Nikolaevich Sorin, who owns the estate and is Madame Arkadina’s brother and Konstantin’s loving uncle. (Scott Jaeck will step in to play Sorin May 24-June 5.)

As in any Russian play of the period, other household members are part of the story. Masha (a goth Karen Rodriguez) is the daughter of Shamraev (Keith Kupferer), a retired lieutenant and manager of Sorin’s estate. Sandra Marquez plays Polina, Shamraev’s wife. Masha’s admirer and later husband Semyon (Jon Hudson Odom), a schoolteacher, is also Sorin’s caretaker.

“Why do you always wear black?” Semyon asks Masha at the opening of act one. “Because I am in mourning for my life,” she replies. “I am unhappy,” And that sets the mood for the performance.

Chekhov’s four acts are combined into two in this production, which runs 2.5 hours with one 15-minute intermission. Act one is set in summer with everyone (except Masha) wearing light colored garb (costume design by Ana Kuzmanic). Act two is set some time later—Semyon and Masha are married and have a baby now—and characters are wearing dark shades of clothing. The mood is darker too, as Trigorin, Irina’s lover, is now in love and yearning for Nina, who also loves him, leaving Konstantin in the lurch, who long ago left Masha in the lurch.

The dialog in Peyanko’s adaptation is sharper, crisper and more modern than the original. Staging and costuming suggest an undetermined semi-modern era. A few modern touches—Irina’s stiletto heels, Konstantin’s pen, readymade cigarettes and cigarette lighters—suggest a modern era. However, the crew members are dressed as Russian serfs.

Did I mention the seagull? It’s a symbolic presence from the beginning when Nina tells Konstantin that her family has forbidden her to come there. “They say that you are all a bunch of bohemians… they are afraid I’ll become an actress… but something draws me to this place, to this lake, like a seagull… My heart is full of you.” Later there’s a dead seagull and a stuffed seagull.

The cast is made up of a blend of newer members of the Steppenwolf ensemble, such as Rodriguez, Marquez and Smallwood, with some veteran actors, such as Perry, Kupferer and Slotnick. Strus, who plays Irina, is a Chicago stage veteran too, having worked with Peyankov’s European Repertory Company (a theater company I still miss for its bold and dynamic stagings). The notable performances in Seagull are by Smallwood as the soulful writer, as well as Neff, Strus and Slotnick.

This is the first production in the new 400-seat Ensemble Theater in Honor of Helen Zell, the centerpiece of the recently opened Liz and Eric Lefkofsky Arts and Education Center, constructed just south of the original Steppenwolf Theatre. The building design is by Gordon Gill FAIA of Adrian Smith + Gordon Gill Architecture. Theater design and acoustics are by Charcoalblue.

I’m giving this a three-star or “recommended” review, but my critic’s eye was overpowered by my architecture critic’s eye. The play is barely recommended.

Seagull continues at Steppenwolf’s Ensemble Theater, 1650 N. Halsted St., through June 12. Running time is 2.5 hours with one intermission. Tickets are $20-$68 for performances Tuesday-Sunday; buy them here. You must show your vaccination/booster card when you enter and masks are required over nose and mouth while you are in the theater building.

For more information on this and other productions, see www.theatreinchicago.com.