On Broadway at Marquis Theatre 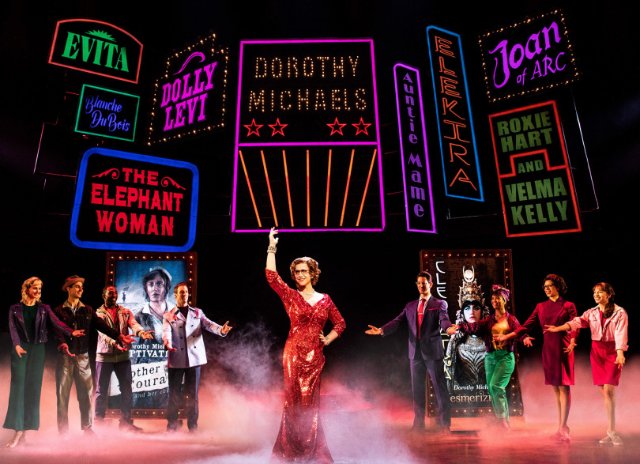 The creative team behind the new musical Tootsie got it right. They didn’t just translate the hit movie to the stage. They rethought the show. Unlike Pretty Woman which opened last summer, Tootsie has made appropriate updating of the show while still keeping the elements of it that audiences loved.

It helps that David Yazbeck wrote the music and lyrics.

Admittedly, the one of the major changes won’t withstand logical scrutiny, but that is annoying but does not affect your enjoyment.

Do you remember the plot? In the original movie (based on the story by Don McGuire and Larry Gelbart), Michael Dorsey is a 40ish actor who can’t get hired because he is known to be “difficult” – he questions everything, argues with directors and generally thinks he knows it all. In the movie, as a lark he dresses as a woman and auditions for a soap opera; he gets hired as Dorothy Michaels, the head of the hospital. As the show goes on, he gains fans as he puts down a lecherous older doctor, assists the young nurse, etc. In his private life, he and the young nurse becomes friends and he is very attracted to her. You can guess the ending.

For the Broadway version, book writer Robert Horn still has Michael as a difficult actor, but in this case he gets hired for a major supporting role in a Broadway bound musical. Again, but much more quickly he starts taking over direction and befriends the purported star, Julie who finds herself now demoted as Dorothy becomes the star. (This is the part that defies logic – seldom would an unknown actress like Dorothy be hired for a major role and in the few months be allowed to take over so completely. And how does Julie feel about her dream of starring in a Broadway show being destroyed?)

Yet, while he are watching and enjoying the show, you will forget any doubts.

Santino Fontana is outstanding playing Michael/Dorothy; he sings, dances some and makes incredible fast changes. He imbues the character with some self-awareness (he knows he’s difficult) but not too much. After all, Michael/Dorothy always thinks he/she is right.  His interpretation will not remind you of Dustin Hoffman’s; this Michael/Dorothy is individual.

His former girlfriend, neurotic actress Sandy as played by Sarah Stiles is just too, too neurotic. She starts at a high level of anxiety and just keeps getting more and more out-of-control. Slightly less hysteria at the beginning might have better balanced the character.

As Michael’s roommate, a floundering playwright, Andy Grotelueschen is terrific. He balances the despair of writer’s block with both sympathy and awe of Michael’s confidence.  He is the perfect balance to Michael’s high intensity.

Lilli Cooper bring sass to the role of Julie, the younger actress who is to star in the musical. Perhaps in recognition of the #me2, she is more able to assert herself. The minor roles with Julie Halston as the show’s producer, Michael McGrath in the minor role of Michael’s director and Reg Rogers as the over-the-top director are all good, though Rogers could have taken it down a notch.

Yazbek as written tuneful melodies with clever lyrics that help us understand the characters.

The production values are what you would expect from a show about show; great costumes by William Ivey Long, scenic design by David Rockwell, lighting by Donald Holder and sound by Brian Ronan.

Director Scott Ellis and choreographer Denis Jones work together seamlessly to keep the show moving and to reveal characters to us.

Tootsie may not be the perfect adaptation of a hit movie, but it is very good and very enjoyable.

Tootsie is at the Marquis Theatre, 210 W. 46th Street. Tickets are available through Ticketmaster.