Hokusai Makes Waves at the MFA

230 Works by Japanese Master on View to August 9 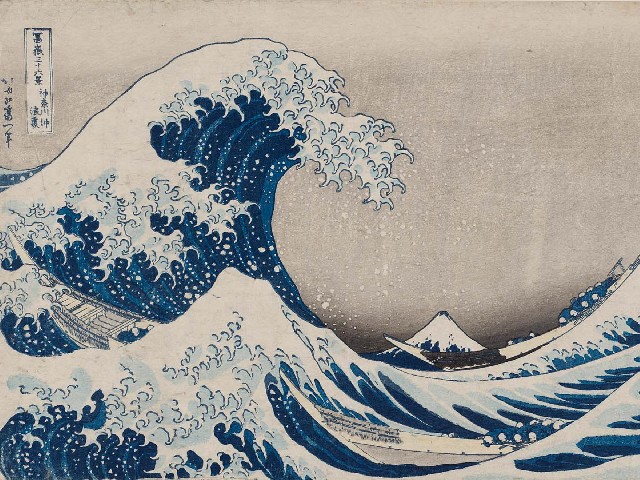 Hokusai's iconic The Great Wave. Images courtesy of the MFA. 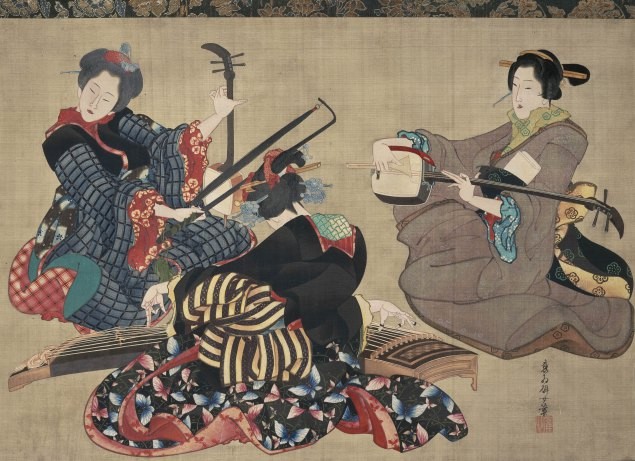 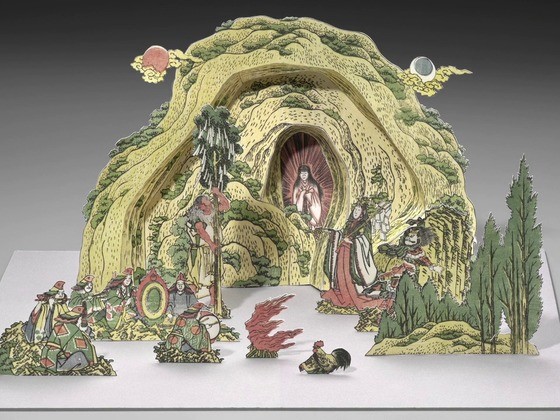 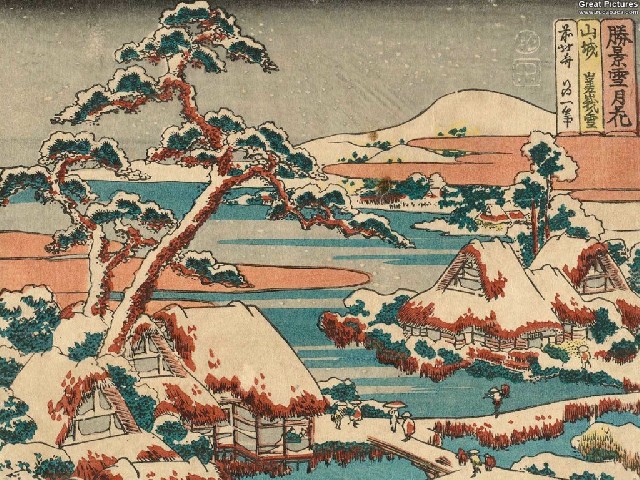 Snow at Saga in Yamashiro Province. 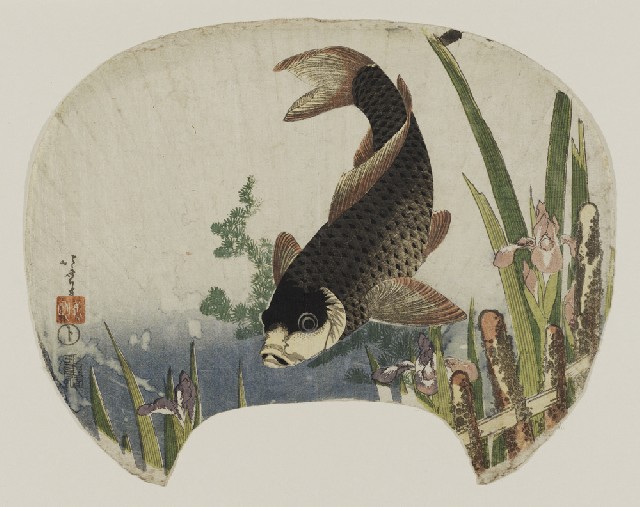 Design for a paper fan. 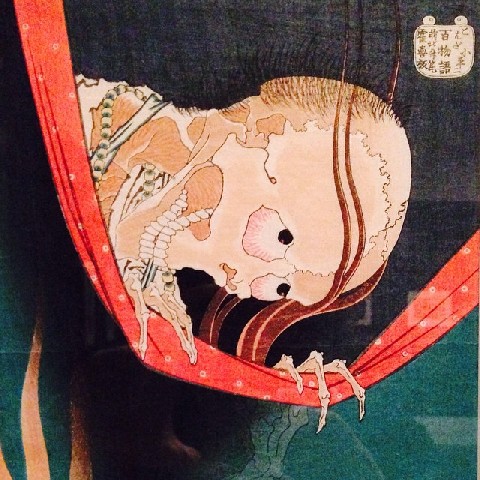 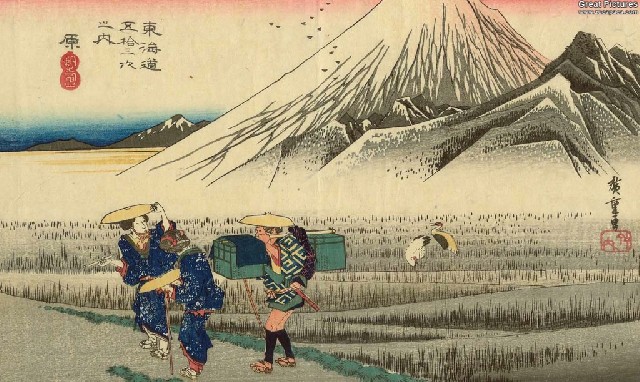 Mount Fuji in the morning. 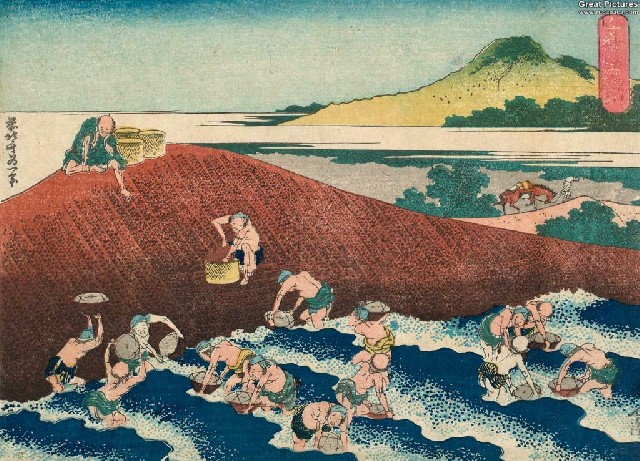 Basket Fishing in the Kinu River. 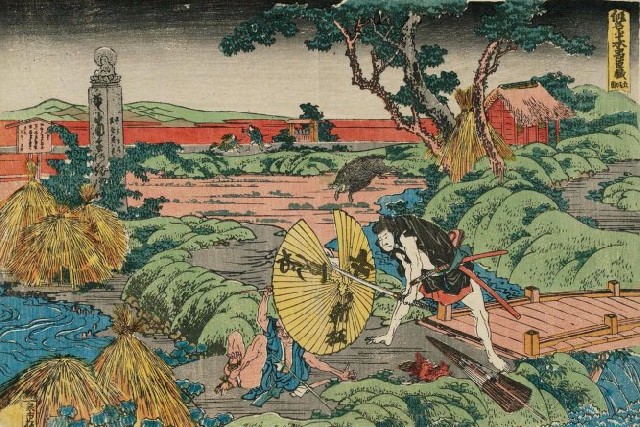 Detail of the Peacock folding screen. 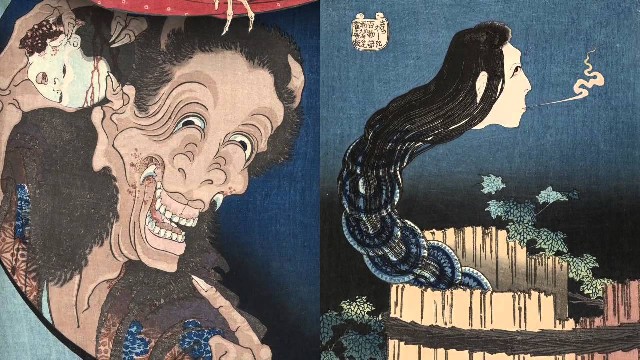 From the Ghosts series.

Through August 9 the Museum of Fine Arts is displaying 230 works from seven dacades by the Japanese master Katsushika Hokusai (1760-1849). In the custom his era and profession he was known by many names. Most of the works in the exhibition organized by Sarah Thompson, the museum’s assistant curator for Japanese prints, are drawn from the museum's vast collection.

The MFA is regarded as having the finest collection of Japanese art of any museum including those in Japan.

This happened because of the presence of four men.Edward Sylvester Morse was a marine biologist. He encouraged the others to collect including the Japanese author of “The Book of Tea” Kakuzo Okakura; the philosopher Ernest Fenollosa; and the physician William Sturgis Bigelow.

This activity started when Morse began to collect ceramics. When he showed his acquisitions to Japanese friends they were polite but not impressed. According to MFA historian, Walter Muir Whitehill, they brought him gifts of better examples and encouraged his interest which evolved into connoisseurship.

Today, there are ethical concerns about the great museums- The Louvre, the British Museum, museums in Berlin and the MFA- which hoarded national treasures as prizes of war and acquisitions during an era of colonialism.

Whitehill quotes Fenollosa's misgivings about acquiring one of Japan's greatest treasures "The Burning of the Sanjo Palace." He states that he would of course hand it over if asked.

In a rush to industrialize and catch up with the rest of the world, after centuries of feudal isolation, it is implied by Whitehill that there was little concern about preserving Japan's artistic heritage. The Bostonians found that major works were readily available from impoverished temples and families. Knowing of their interest there were spotters who brought treasures to them. Prints in particular were inexpensive.

When the collectors eventually returned to Boston they made donations to the museum. Bigelow was the most generous giving 4,000 Japanese paintings and more than 30,000 ukiyo-e prints—one of the largest collections of its type in the world. Morse, Fenollosa and Okakura all served as MFA curators, and Bigelow was a MFA Trustee.

The MFA collection spans from the eighth century to modern times. This includes the eighth-century HokkedÅ konpon mandara, one of the earliest extant landscape paintings in East Asia; the 1189 image of Miroku, the earliest dated work by the master sculptor Kaikei; the mid-13th-century Heiji monogatari emaki, which chronicles the burning of the SanjÅ Palace ; and the Four Sages of Mount Shang, a pair of whimsical screens by the 18th-century eccentric painter Soga ShÅhaku. In addition, the MFA holds important examples of lacquer, ceramics, swords and sword fittings and a large group of NÅrobes and masks.

In the 1960s when I was an intern in the museum's Egyptian Department during lunch breaks I spent time in the galleries. In the Asiatic wing one could hear a pin drop. Compared to the impressionist galleries Asian art attracted few visitors.

The Heiji monogatari emaki, which on an intimate level is as intense and on a par with Michelangelo's Sistine Chapel ceiling, was displayed in a wide, horizontal vitrine set at a 45 degree angle to the viewer. It was covered by a cloth to protect its colors. One had to know to pull it back. You would start at one end and slowly move to the other as the action intensified in the palace under attack and then trailed off. It is truly one of the world's greatest masterpieces.

There was also the dimly lit temple room. One asked a guard to open it to view some of the rarest and finest Buddhist sculptures.

One day I was standing in quiet meditation of these works when several Japanese tourists entered the gallery. They began to pray and weep. I was astonished by the notion that for them the sculptures were much more than works of art.

Decades later the Asiatic collection has been reinstalled. The courtyard of raked Zen sand and rocks has now been moved outside on one end of the museum. It is open during the summer months and one may enjoy its subtle flowering shrubs. I recall when it was being installed by a crew of Japanese masters.

Particularly under former director, Jan Fontein, who was elevated from the position of Curator of Asiatic Art, there was lively attention and subtle diplomacy. As the former publicist Clementine Brown told me when "Jan visits Japan he's treated like a Shogun."

While Greece and Egypt clamor for the return of "looted" treasures that is not the case with the MFA and Japan. The MFA contributes to a branch of the museum in the city of Nagoya. There is the unique sense of cooperation and stewardship. This is particularly true in the area of conservation.

During my time at the MFA I was close to an assistant curator, Emily Biederman, and enjoyed visiting the department. I was introduced to a conservator whose full time job was restoring fragile screens.

One may view the prints by appointment. But only a sample of this trove is on view at any given time.

Seeing a special exhibition of 230 works by Hokusai is a rare and remarkable experience. Unfortunately, because we were visiting Boston, this was confined to a single viewing. I lingered over each and every work taking many images. This was allowed because the museum owns the works. Everyone was snapping away with their smart phones.

Were I still buried in the basement of the museum this is the show I would visit every day during my lunch break. There is such a richness of detail that a single visit is a meager taste of its greatness.

For most visitors what little they know about Japanese art and Hokusai in particular is his iconic “Under the Wave off Kanagawa,” “a.k.a. “The Great Wave.” It was created when the artist was in his 70's. It is the masterpiece of his series of color woodblock prints “Thirty-Six Views of Mount Fuji.” Because of their popularity he added ten more. At the time the price of a print was about equivalent to the cost of a bowl of noodle soup. They were surely still quite affordable when Bigelow purchased them in such quantity.

The prints were discovered by and greatly influenced the French impressionists. Initially, they were so cheap and expandable that they were used to wrap ceramics shipped to Europe. One may see Japanese prints as background in the portraits of van Gogh. In some instances he copied or appropriated them as he had done with images by the Barbizon artist Millet. Monet dressed his terminally ill wife Camille in a Japanese robe and gave her a fan to hold in the MFA's great portrait. There is the influence of flattened Japanese perspective from Hokusai in the paintings of Degas.

We call this phase of European art and design Japonisme. One of the singular works of this style was Whistler's "The Peacock Room." There was a deconstruction of it by Darren Waterston last summer at Mass MoCA. The era of Japonisme followed by a century the fashion of Chinoiserie in the decorative arts and furniture.

It is ironic that Hokusai was so important to the French artists because he in particular had been influenced by European art and linear perspective. He derived this largely through the study of French and Dutch prints. When Japan opened to the West the Dutch were important trading partners. Japanese artists and artisans created works specifically for this trade.

While "The Great Wave" proved to be influential to 19th century French artists it remains remarkably fresh and exciting. The flat wood block colors and exaggerated, stylized, dramatic rendering of the crashing wave, coupled with the distant mountain and human element of boats caught up in the pounding surf, seems remarkably like the ethos of Pop art.

One might easily imagine it as a work by Roy Lichtenstein. The image is so extreme that is readily invites appropriation and parody. For the casual observer it may signify Japanese art.

The opposite was true. If anything Hokusai departed from restrained traditions.

At 14, he became an apprentice to a wood-carver, where he worked until the age of 18, then became a member of the studio of Katsukawa ShunshÅ. He was an artist of ukioy-e style of wood block prints and paintings and head of the Katsukawa school. Ukiyo-e, as practiced by artists like ShunshÅ, focused on images of courtesans and Kabuki actors.

When ShunshÅ died in 1793, Hokusai explored other styles of art, including French and Dutch copper engravings. He was expelled from the Katsukawa school by ShunkÅ, the chief disciple of ShunshÅ. As Hokusai stated "What really motivated the development of my artistic style was the embarrassment I suffered at ShunkÅ's hands."

Hokusai evolved away from the traditional subjects of ukiyo-e. He focused on landscapes and images of the daily life of Japanese people from a variety of social levels. This break made the work accessible and appealing as is abundantly evident in the MFA exhibition.

The landscapes are particularly engaging as they parallel the populist appeal of Dutch and French paintings. On an intimate scale the genre subjects evoke Bruegel and Jan Steen. Or the French Barbizon artists.

Looking closely you find glimpses of everyday life in Japan. This is a significant departure from the formalism of court painting. Hokusai revealed the "Floating World." It depicted the lively entertainment, or red light districts of Kabuki theatres, tea houses and brothels.

An important aspect of his oeuvre is “shunga” or erotica. In the interest of protecting the general public and families there is just a hint of this genre. The prints were acquired as how to sex manuals for newly weds. There was a Japanese tradition of connoisseurship in the arts of sexual pleasure from common prostitutes and courtesans to the exquisitely trained Geishas.

The artist explored a number of themes. Some of the most surprising images are from the series “One Hundred Ghost Stories.” They will fascinate those with interests in the paranormal and horrific. There is a significant presence of ghosts in Japanese art. One thinks of the stunning passage in Kurosawa's "Rashamon" when the sprit of the samurai slain in the forest gives testimony against the accused bandit.

There are stunning views of fish navigating the cascade of a waterfall. Another work in eight folding panels displays an abstracted, decorative peacock. We see examples of paper fans and pop up playful sets. There is even the rare example of a paper lantern.

One would imagine that for such a renowned artist he enjoyed the luxury of success. By the end of his life at 88 he was hounded by creditors and dealing with family conflict.

At the age of 73, entering a particularly productive period marked by the series of views of Mt. Fuji he stated, "...yet of all I drew by my seventieth year, there is nothing worth taking into account. At seventy-three years I partly understood the structure of animals, birds, insects, and fishes, and the life of grasses and plants. And so, at eighty-six I shall progress further; at ninety I shall even further penetrate their secret meaning, and by one hundred I shall perhaps truly have reached the level of the marvelous and divine.”

While he did not live to reach those goals he left a remarkable legacy. It is a triumph for the MFA to present the range and depth of his singular vision. Indeed, no other museum has the resources to match this exhibition.