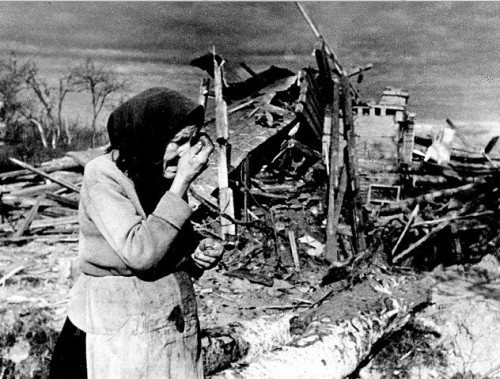 Shostakovich’s music conjures up these images. 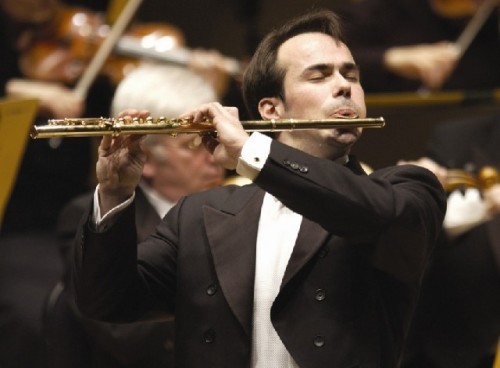 Mathieu Dufourâ€™s flute solos were etched with a clarity and beauty seldom heard on any instrument. 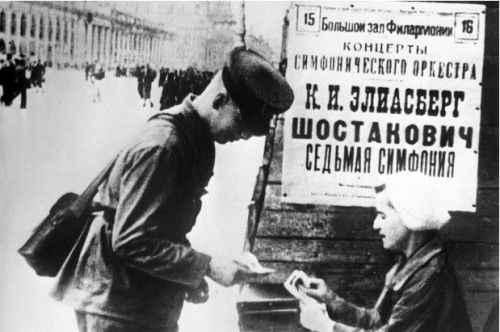 A soldier buys a ticket to the Leningrad premier of The 7th Symphony. 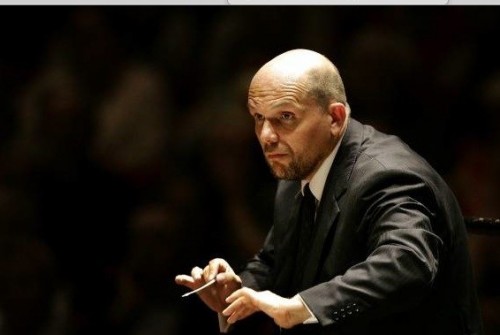 Memorial Day celebrates American soldiers who have died at war, at first brother warring against brother, and then out in the world. Arlington National Cemetery is not the only place where American veterans are laid to rest, but it is the symbol of burial with honor for those who have served. It is important to remember how Arlington came to be.

Arlington House at Arlington National Cemetery was the home of Confederate general Robert E. Lee prior to the Civil War. As an act of personal retaliation against Lee, the Union buried war dead in front of his home to which he never returned. The Union blamed Lee for what they saw as an unnecessary war.

It is the human terms of war we remember on Memorial Day.  No one has portrayed them more movingly in music than Dmitri Shostakovich.  Born in Leningrad, and living there when the Germans began their almost 900 day seige in 1939, Shostakovich remained in his home and began to compose his Leningrad Symphony. Initially viewed as an 'event', it was then reviled as music by Béla Bartók and many other composers.

Toscanini premiered it in the US winning out against other eager conductors.  He would later say, when asked about the symphony, "I played that?"

The Chicago Symphony Orchestra was led this weekend by Jaap Vam Zewden, a riveting conductor who is both solidly in control and a romantic. Under his baton, this music became a cry of the heart against death and for life, as another admiring conductor, Semyon Bychokov has said.

"I wrote my Seventh Symphony, the Leningrad, very quickly," Shostakovich noted.  "I couldn't not write it.  War was all around. I had to be with the people.  I wanted to create the image of our country at war, capture it in music."  He did. Van Zweden and the Chicago Symphony showed us how.

The first 27-minute long movement—with the sudden entrance of the march theme and its variations, is softly articulated by violins and violas accompanied by a small military drum, then varied by flute, oboe and bassoon. It comes to the fore with the addition of more and more instruments, and finally culminates in a hurricane of wind instruments and drums to the raging backdrop of violins, strings struck with the bow stem like dancing skeletons.

This 'invasion' theme is borrowed from Shostakovich's “Lady Macbeth of Mtsensk”, and but clearly suggests “You’ll Find Me at Maxim’s” from Franz Lehar’s “The Merry Widow”—Hitler’s favorite operetta.

The inferno of music ends as oboe and bassoon lament the victims of the battle.  Yet the violins try to resume the march theme. We are again warned of the imminent peril by the quietly vibrating strings evoking voices from the graves. A soft drum beat promptly sounds the march theme, emerging from the distance.

Already in the first movement, van Zweden has carved a masterpiece of emotional clarity from the Symphony.  Individual members of the CSO add immeasurably to overall effect.

In the second movement scherzo the moods change often, from humor to joyful dances and to incomparable sadness. "...a very tender, lyrical intermezzo...it contains no..concrete pictures...a roller-coaster alternating between hope and despair," wrote the composer. The third movement is funereal, the flutes and strings singing mournful songs.  The loud horns, nine of them, burst in with anger.  Grief and pain mix.

The first impression of van Zweden's take on the last movement is victory. But this quickly slips away as major and minor colors alternate.  The conclusion with the massively full orchestra is one of grief.

For the Leningrad premier, presented in August, 1942, a radio band reduced to fifteen players performed.  The other eighty-five instrumentalists were gathered from the front and also from homes around town where musicians lived.  The conductor was so physically weakened he could barely hold his baton.

The performance was sold out, and even before the last movement began to be played, the audience rose to applaud.

In Chicago, the performance made a case for this music beyond its compelling story.  It honors soldiers by displaying the horrors man creates.  Presented with beauty and horrific clarity, Shostakovich succeeds.

Benjamin Britten was a pacifist who left his home country to avoid fighting in the Second World War.  His War Requiem is another signature anti-war composition.  This evening's program began with a medley of his interludes and a passacaglia from the opera Peter Grimes.  A blend of love for a place and hatred of its human cruelty, this music rocks us.

The Music Director of the Chicago Symphony talks often of the power of music to move, soothe and elucidate. This Memorial Day program is also a testament to Maestro Muti's vision.