Relocating to a Lee Mass Landmark. 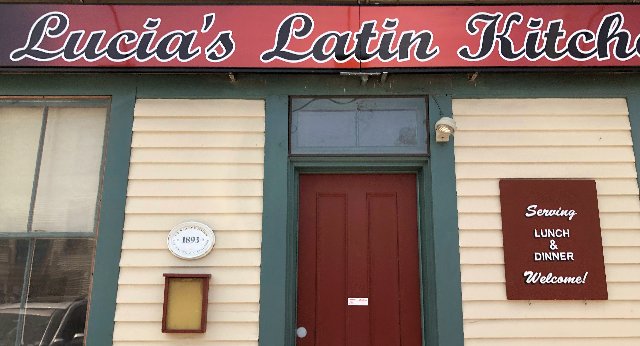 The familiar entrance has been reconfigured. 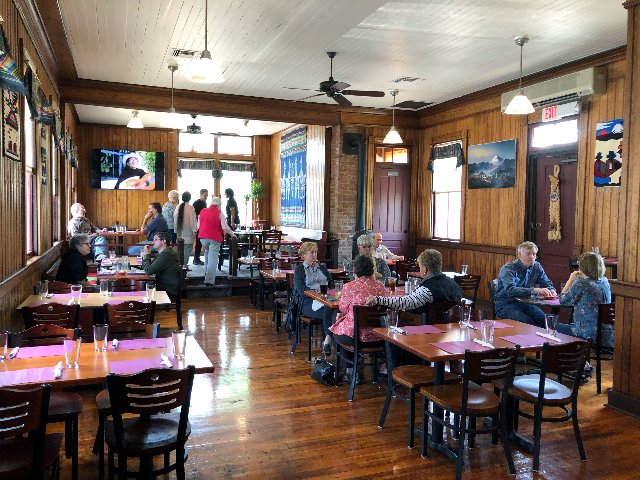 The vintage interior from its days as a railroad station waiting room. 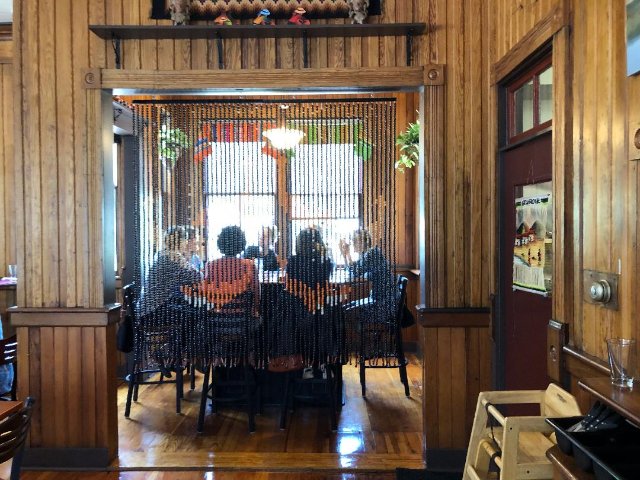 This private room is perfect for a large party. 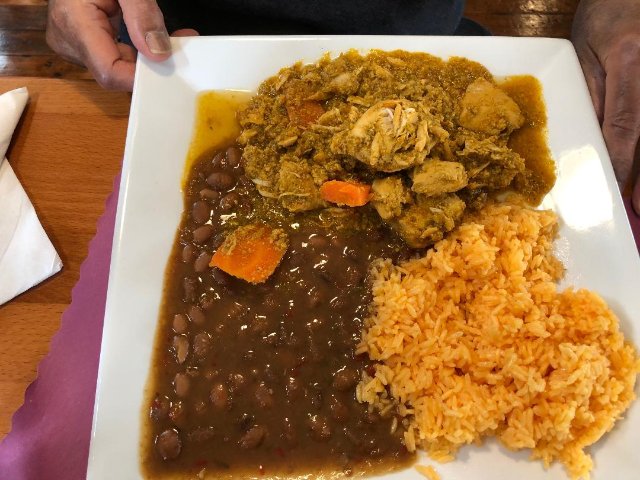 The special chicken stew with rice and beans. 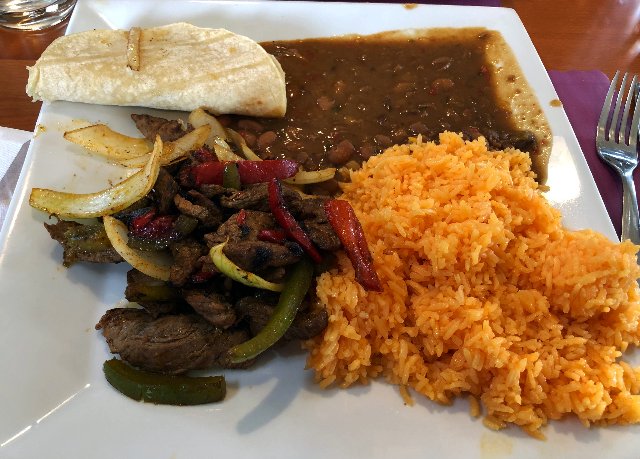 A special of beef fajitas.

It has been some time since Cisco and Pancho the Berkshire’s Pit Bulls last took on a new restaurant.

In this case Lucia’s Latin Kitchen is a new old restaurant. It was in business at another location. There Pancho enjoyed the food but the cuisine was new to Cisco.

There was another irony as the venture has settled in a familiar and venerable space. The greatest asset of the former, long running restaurant, Sullivan Station was its unique ambiance.

The space was constructed in 1893 and served as the station for the railroad which long ago ceased to accommodate passengers. Instead of waiting, unless the service is slow, this is now a place to dine.

In this case the service was not so much slow  as inexperienced.

Our first encounter with the waiter was a disaster. There was obvious miscommunication.

Much was lost in translation. We asked if there were daily specials. There were he said before disappearing never to return.

While looking around at the vintage interior, now accented with a bit of Hispanic decoration, we perused an extensive menu. A recent news story described that money had been invested to upgrade an antique kitchen. But, wisely, the lovely unique interior, its greatest asset, was spared interior desecration.

There was no rush as the amigos had much to catch up on. Complimentary chips and salsa, a norm for Latino restaurants, would have nice but was not the case. No matter.

We were surprised when the hostess came to take our order. Our initial waiter was spotted here and there delivering food and bussing tables. It was never clear exactly what he was doing.

Being new to the menu we had questions. It states kabobs as “our singular dish well known in the Berkshires.” A variety of proteins are offered as “single” or “combination.” Single skewer comes with a side of plantain, zucchini or pineapple.

We asked if the combination, at roughly double the price, entailed another skewer? She stated that no it meant the choice of another side dish: rice and beans, dirty rice, chicken with rice, potato pancake, vegetable with rice, or Latin vegetables.

Going for broke we ordered combo kabobs. Cisco’s chicken kabob jumped from $7 to $13.99.  She took our orders and I asked for it to be delivered with appropriate hot sauce.

She returned to ask if there was anything else. We stated that our lapsed first waiter never told us the daily specials and that alsoshe had failed to do so. We asked what they were and how much? There was a chicken stew for about $10 and a choice of chicken or beef fajitas as affordable lunch options.

Noting our disappointment she offered to change the order. Accordingly, we did ordering one each with mostly positive result. When the food arrived, however, the hot sauce did not. I refused to start without sauce and lunch was getting cold as we waited.

By then the waitress was busy with arriving customers. I managed to flag down the 'floater' and asked him for sauce. He seemed to comprehend but yet again went into an agonizing disappearing act. Different sauces, in two small portions eventually came. But then we committed another huge error. We stated that both of us wanted sauce. There was not enough salsa for us to split.

The salsa, which miniscule, was terrific. It had enticing heat. The second container had a mayonnaise based condiment which was unusual and enticing. It was a nice topping for rice and beans.

The waitress was pleasant and accommodating but inexperienced. She informed us that the restaurant had been in its new location for about a month. There is an extensive menu to explore and we will return for a dinner foursome.

But that may take some time. At least long enough for the restaurant to work out the kinks. Pancho reminded me that it is best not to visit a restaurant until it has been in business for at least four months.

So consider this as more  of a preview than  review.