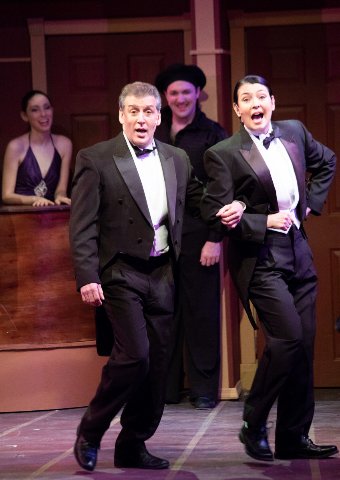 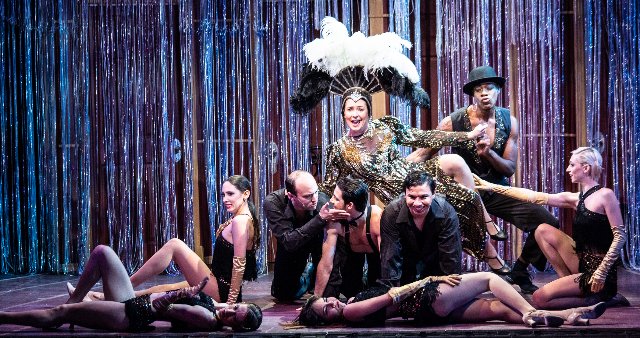 (Photo courtesy of Stage Door Theater) "Victor" (Dalia Aleman) is surrounded by the cast of Victor/Victoria.

Stage Door Theater has just the antidote for the persistent rain and dark, cloudy skies south Florida has experienced over the past couple weeks.

The reprieve is the sunny, funny musical comedy Victor/Victoria, about a woman impersonating a man who impersonates a woman. That has to leave you at least chuckling.

This opulent production presents us with an appetizing Paris, France. It beckons like a wide-eyed, friendly and story-filled uncle whom you haven’t seen for ages. Area theatergoers have until June 10 to experience the warmth of 1930s gay Paris. The Carbonnell Awards-recommended Stage Door production runs through that date at the venue near Ft. Lauderdale.

Fear not, fans of the film: The stage version, with a catchy and varied score as well as clever lyrics, retains the charm, vivacity and humor of the 1982 movie upon which the play is based. The live version is just as fun, if not more so, than the flick.

The play opened on Broadway in 1995. It ran for 734 performances and won Julie Andrews a Tony for her turn as Victoria and Victor.

While the live adaptation is mostly faithful to the movie, book writer Blake Edwards, composer Henri Mancini, lyricist Leslie Bricusse and Frank Wildhorn have made the play stand on its own merits.

True, beloved scenes featuring a cockroach in a restaurant and the perpetually-fainting Victoria are absent. But there are plenty of other appealing low comic antics that make this stage show and this production a rousing success. They include well-timed farcical, highly energetic comedy.  You just know that when you have at least seven doors that open and shut with little time lapsing, you're in for a physically comic treat.

Physicality is in no short supply here.

The performers deftly execute Danny Durr’s robust, acrobatic and varied choreography. Some performers possess singing voices that reach the rafters. They can hold these high notes for an impressively long duration while sounding clear and not straining. It would, however, be nice to have a live orchestra accompany them (this is live theater, after all), but the pre-recorded accompaniment still possesses a rich sound without drowning out the actors.

Song and dance flow as freely as liquor in this irresistible production. It carries an elegance and romance befitting the fine living of the “City of Lights.”

In fact, Paris is practically a character in and of itself, with its luxurious, welcoming aura.

Director Kevin Black, who nicely balances romance and elegance with slapstick, sets the tone at the beginning. That’s when we hear the romantic opening number “Paris by Night.” Slow, passionate dancing, during which the performers’ movement suggests carefree birds in flight, reinforces the ambiance. So does the luxurious set design. It features a set by Stage Door Scenic that allows for seamless transitions.

Meanwhile, Jerry Sturdefant's stunning, elaborate and elegant costumes enhances the ambiance and lighting designer Ardean Landhuis has created mood-enhancing hues. All of these elements combine to create a unified effect. Specifically, this production makes us want to enter the show's world of gaiety, luxury and energy.

While we’re at it, let’s not forget sunniness. Part of the set design includes the image of a sun as a backdrop. Its rays extend out in various directions. This might suggest the city is sending out its love to all the corners of the world. Within the image, there are also arrows pointing toward the sun. Might these represent people from across the globe returning the love?

There are many adoring fans of the film. As these folks know, gay night club performer Carroll “Toddy” Todd, would rather be a woman. Meanwhile, singer Victoria Grant prefers the opposite for herself.

Following the penniless Victoria’s failed audition at a nightclub, a eureka moment enters Todd’s mind. Why can’t she get a job impersonating a man who impersonates a woman?

So, Todd creates a backstory for “Victor” and plunges her into the gay Paris nightclub scene.

The result produces mostly escapist fare and stereotypical characters (a gangster and his scatterbrained girl whom he kicks around, for instance). Still, Victoria/Victoria contains some substance. This show is also about being true to oneself, respecting others who are different than you…and if you’re male, deciding what type of man you wish to be.

“You’re one type of man, I’m another,” Victoria (as Victor) tells King Marchan. He’s a businessman/gangster type who discovers “Victor” on a trip from  Chicago.

“One who doesn’t have to prove (my masculinity) to myself or anyone else."

Obviously, women have come a long way since the 1930s. Their status in society is likely to only become stronger with the Me Too Movement increasingly gaining steam.

Victor/Victoria is a period piece, evident in lyrics such as those from the dream-like number “If I Were a Man.” Consider:

If I were a man, I could do a lot of things a woman never can…Be free to plot and plan, free to live my life without permission from a man.

If Victoria were living today, she and King, with whom she falls in love, wouldn’t have to be “Living in the Shadows.” This song with a melancholy flavor features a duet between “Victor” and mobster King Marchan. Obviously, the mob during the 1930s wasn’t very sensitive to the homosexual lifestyle. The two sing of having to live and love basically in secrecy.

In the show, the entire gay Paris community might not let all of Europe know about their lifestyle. Still, they “live it up.” They do so not just gaily, but with vivacity and sensuality.

Heat radiates from the stage during a sultry version of the Tango as well as the number Le Jazz Hot. The latter is a steamy tribute to Jazz and New Orleans. With the song’s celebration of Jazz, Chicago creators John Kander and Fred Ebb would be thrilled.

Thrilling, convincing performances by triple-threat actors are sure to delight audiences.

Dalia Aleman leads the way with a naïve, sensitive and charming Victoria. She later transitions into a nightclub performer who owns the stage. All in all, Aleman creates characters who are easy to pull for.

James A. Skiba endows Marchan with a confident aura, bordering on arrogance, with a touch of shadiness. This character, like others, undergoes a change. Skiba eventually finds Marchan's sensitivity and softness.

One thing about the show that keeps our interest is the fact that Marchan isn’t so sure “Victor” is a man.

However, there’s no questioning Squash Bernstein’s masculinity and macho tendencies for most of the show. He is Marchan’s bodyguard, a burly former football player with wide, dangerous-looking eyes. He’s really quite harmless, though, and not so bright.

A rough, coarse Kevin Reilly, with a scratchy voice, plays mobster Sal, who’d recoil at such a sight.

Sal has a temper, as does the ditzy Norma (Ashley Rubin, who also makes her a scatterbrained, fun-loving moll).

The large cast, and the show in which they’re performing, provides plenty of antics to keep us laughing. For about two-and-a-half hours, we can forget the oft-depressing 24-hour news cycle.

Meanwhile, this show serves to whet our appetites for the more outrageous La Cage Aux Folles. Stage Door Theatre will present the classic musical from Aug. 31-Sept. 23 in its new performance space in Lauderhill.