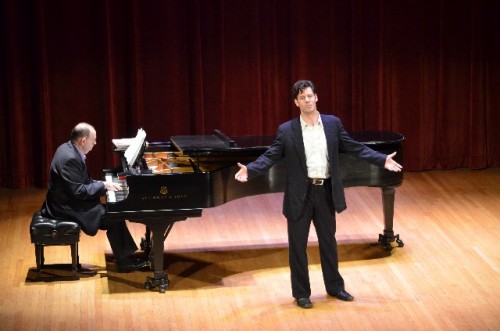 Patrick McNally at University of Albany

Back in September of this year I had the pleasure of catching a gem of a concert put on by the Hubbard Hall Opera Theater (HHOT) in Cambridge, NY.  It was one of those events you don’t expect to stumble on in these parts, and yet after a nice lunch at the Roundhouse Café on a sidewalk table in the sun, I was preparing to head back home when the sound of a well-trained soprano singing her scales wafted down the street. My ears perked up, and wandering by the Hubbard Hall main entrance I happened to see that a concert of Italian art songs and arias was about to begin in a half an hour at the famous Hubbard Hall “pay what you will” admission.

It turned out to be quite a popular show, the Serenata Italiana, so popular that it seems HHOT has scheduled a reprise tour in mid-June.  Among the lucky venues are the Bennington Center for the Arts and Skidmore College.  The line-up is much the same as it was in September, featuring some HHOT regulars to include Rutland bred singer, Brooke Larimar, who possesses a deep and powerful true mezzo instrument.  Mezzos are so often either a low soprano without the high notes, or a heavy voice that squawks through lines in an operatic stereotype.  However, Larimar keeps her smooth voice centered and in tune which makes for easy listening.

The animated and convivial Patrick McNally (last seen as the Barber in the HHOT summer production this past year) sang with his typical baritone gusto and provided some of the best introductions for his pieces, which was necessary at Hubbard Hall as there were no formal programs.  The introductions worked well and kept the audience engaged; it would be nice if they kept this aspect in Bennington and Saratoga with or without paper copies.  Rachele Schmiege (Violetta from Traviata with HHOT) was certainly the star of the evening in September, and I expect no less in June.  Her clean, silvery voice and her innate ability to interpret the music has not yet failed to enthrall me.

The tenor has been changed out to someone we haven’t heard before, which is both a shame and exciting.  Chris Nelson has large shoes to fill, and yet based on his reviews and youtube clips (yes, I am a stalker), he seems more than capable of fitting the bill with a great Italianate attitude and sound.  The pianist has also been switched out from the ever capable Michael Clement of local fame, to Tristan Cano from New York City who boasts a blooming career in operatic accompaniment.

I’ve seen it once, but I think I will have a go a second time because after all, Verdi, Bixio and Tosti don’t really get old. I most look forward to seeing the difficult and rarely performed Mascagni duet from Il Cavaleria Rusticana which I hope is included in the line-up once more.  It is a piece full of angry passion where Santuzza confronts Alfio whose wife is having an affair.  I remember being on the edge of my seat as the Clement struck the final playout that left the piano shaking and Larimar in tears on the floor.  Exhausting and electrifying- maybe HHOT wants to have a go at the whole thing one day with orchestra?

Serenata Italiana will play on June 14 at the Bennington Center for the Arts.  For dining, the pickings are slim these days in Bennington, but you could try stopping in at Allegro Ristorante or the Bennington Station for a bite to eat before heading over.  For a longer weekend of cultural activities, you could also catch the concert in the Zankel Recital Hall at Skidmore College on June 15 as one of the final performances during a Saratoga Arts Fest week jam-packed with music, dance and theater from around the region.  No need for dining recommendations in that town- everywhere you go is good.