The House Of Blue Leaves 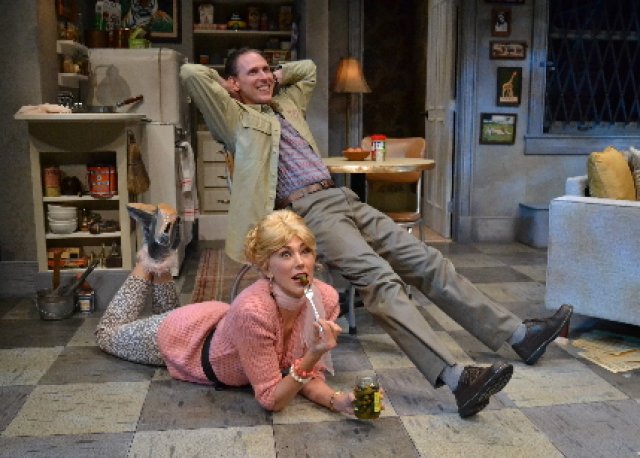 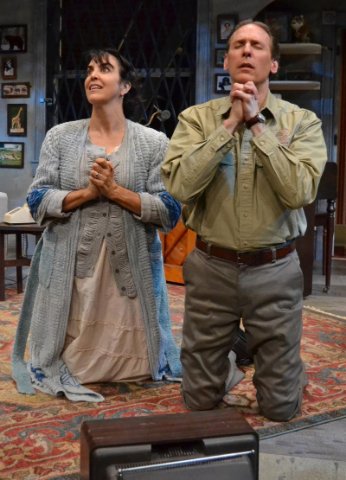 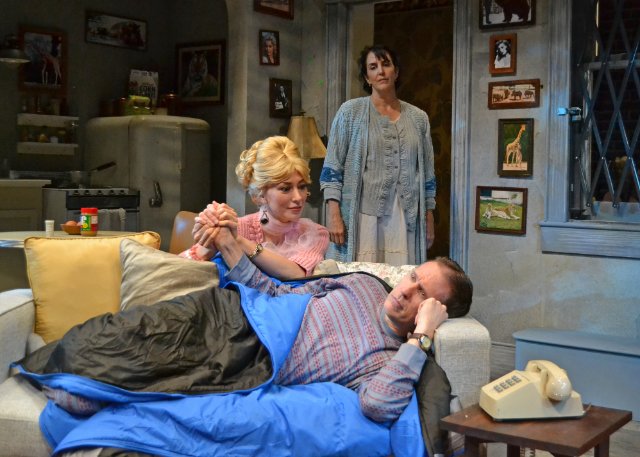 As anyone familiar with John Guare’s The House of Blue Leaves knows, Hollywood songwriter wannabe Artie Shaughnessy poses a question in one of his songs. Specifically, he wonders, “Where is the devil in Evelyn?”

Well, here’s another question – where is the darkness in Palm Beach Dramaworks’ production of The House of Blue Leaves?

Unquestionably, the wackiness and wildness are well accounted for. That is, unlike Ronnie Shaughnessy’s AWOL status from his military assignment post.

So, those planning to attend Dramaworks’ zany yet at times heartfelt production should prepare themselves for belly laughs.

In fact, if you had to choose a shade of blue to describe the overall tone of this production, you’d likely choose azure.

Indeed, for a play that, in the author’s words, is about “humiliation and the cruelties people inflict on each other,” Dramaworks’ mounting leans too heavily toward the comedic. There needs to be more balance between darkness and lightness, heartbreak and humor as well as surrealistic and realistic.

Come to think of it, this production possesses a sitcom-like quality, albeit one that, for this play, is appropriately over-the-top and wonderfully wacky.

To be sure, director J. Barry Lewis helps this locally well-known, talented South Florida cast capture moments of pathos and, at the end, keen heartbreak.

For instance, at times, three-time Carbonell Award-winner Elena Maria Garcia, as the mentally-ill Bananas, convinces us that she feels alone amid the craziness within the Shaughnessy household.

During these moments, she lowers or closes her eyes. She wears a forlorn expression. And Lewis wisely sets her apart from the other characters. This decision helps reinforce a sense of isolation.

But during other scenes, Garcia’s Bananas looks strangely content with others ignoring her. This, despite the fact that it’s clear she wants to belong.

Even so, Bruce Linser’s Artie, her husband, hardly acts cruel toward her. Instead, he looks at her with a mix of pity, annoyance and sternness. As Linser embodies him, Artie’s like an overtaxed adult who, nevertheless, must care for an ill parent. And Artie’s relatively kind treatment toward his wife makes the tragic ending all the more saddening.

Perhaps Artie’s comparative softness toward his spouse stems from a directorial choice. It’s possible Lewis didn’t want to make Artie too hateful.  Further, Guare doesn’t just write with cruelty. He conveys compassion in his writing. And clearly, he wants us to feel for characters such as Artie.

For his part, Linser invests Artie with enough redeeming qualities to win us over. This local theater artist, an award-winning actor and director, lends his wild and wide-eyed Artie a sweetness without saccharine. Also, the performer imbues the zookeeper by day/amateur performer by night a nervous, almost frantic energy. Clearly, he’s a bit of a nebbish. However, there is also an urgency about Linser’s Artie. It’s as though time is passing him by. He wants, needs to immediately escape his suffocating existence in 1965 Queens. In particular, he hopes to zoom to Hollywood and become a famous songwriter in Tinseltown.

Toward the play’s ending, Artie’s close friend, Hollywood producer Billy Einhorn (a self-assured, charismatic Jim Ballard) tells Artie and Bananas, “Do you know what the greatest talent in the world is? To be an audience.”

But Billy could just as well have saved his breath. His words, however encouraging, only feed even more Artie’s desire for fame. And as Linser portrays him, the untalented songwriter rushes to the piano. Then, in extreme desperation, he plays his songs faster. It is as though that act alone will whisk him to Hollywood.

Humanity’s obsession with fame, and more specifically, to “better” ourselves by becoming famous, infamous, or at least living vicariously through those that are, helps drives this play’s plot.

With a darkly comic, absurdist and ironic tone, Guare posits that we don’t have our priorities straight due to our deluded, and less than righteous, value system. We glorify those who’ve attained fame or a high position in society and consider them better than us. In doing so, we neglect what’s truly important in life.  And at least in Artie’s case, that includes Bananas. As a matter of fact, he wishes to toss her in an institution and escape with his girlfriend, Bunny, to Hollywood — all to attain fame.

For those unfamiliar with the play, its author based it on a true story. In October 1965, Pope Paul VI visited New York City, marking a pope’s first visit to America. At the time, Guare was, ironically, in Rome. Six weeks later, while in Cairo, the young playwright’s parents wrote to him. They marveled about the joy of seeing the pope in person and the frenzy amid the crowd as he passed them.

With that, the seed for The House of Blue Leaves sprouted.

In the piece, Artie hopes a papal blessing will propel him to songwriting stardom in Hollywood. The unhappy zookeeper’s buoyant girlfriend, Bunny, shares his hope and dream. Meanwhile, other characters possess their own reasons for wanting to see His Holiness in person. However, if they cannot they at least want to see him on TV — and, in the process, kiss the screen in false veneration. The decade during which the play was, like the present time, a tense time in America, what with the Vietnam War raging and a nuclear arms race taking place. People were obviously nervous and possibly felt a need to act quickly to fulfill their dreams and take other actions for themselves.

The multi-award-winning The House of Blue Leaves is many things – a dark comedy, a satire, a surrealistic play, a heart wrenching one, a tragedy and a non-traditional farce. In fact, according to an article in The News Press of Ft. Myers, that city’s Florida Repertory Theatre described Guare’s play as “The Marx Brothers meets Greek Tragedy.”

All genres within the play are in service to its themes. Guare's play is hardly one big mishmosh. Still, establishing just the right tone can prove a hefty challenge for a director and the cast.

While Lewis and Co. may not nail that tone, they succeed on several levels. For instance, the cast, clad in Brian O’Keefe’s character-defining costumes, does a good job establishing an ironic tone. Further, they unapologetically stress the Brechtian aspects of the play.

As an example, Bunny winks at us. Also, during the reviewed performance, cast members requested that we sing along to one of Artie’s second- or third-rate songs (music and lyrics by Guare). At one point, Bunny not only addresses us, as do other characters, but steps offstage, sits on its edge and addresses us. At another moment, Bananas talks to us as though we’re invited guests and she’s our host for the evening.

This may all sound ingratiating. However, the Brechtian aspects of the play carry a deeper intent. And that is, perhaps, to make us feel that we, too, might hold fast to deluded, misplaced values…and even be complicit in making them the norm throughout society.

On a brighter note, The House of Blue Leaves is also about holding onto your dreams. As a matter fact, on the first day of rehearsals, Lewis shared with the cast a Langston Hughes’ poem. It begins, “Hold fast to dreams.”

“We carry our dreams carefully so that we don’t lose sight of that which is hoped for, that which is possible,” Lewis noted in Palm Beach Dramaworks’ newsletter, In The Wings.

Speaking of not losing sight of dreams, the performers’ expressions might suggest they are literally keeping a close eye on them. That is true, in particular, for the wide-eyed, seemingly vigilant Artie and Bananas, as Linser and Garcia portray them. Both convey a sense of urgency to see their wishes fulfilled.

Bananas obviously hopes that others treat her like anybody else. In addition, she wishes to live a happily married life. Who among us cannot relate to that?

To her credit, Garcia resists turning Bananas into a caricature. The actor invests the character with vulnerability, humanity and always plays the part sincerely.

Specifically, Garcia’s Bananas is like a simple, innocent, happy child. With her wide-eyes, curled eyebrows, as well as brown hair and brown eyes, it’s easy to picture a younger Mercedes Ruehl.

Bananas is a challenging role. That is true, in part, because Guare doesn’t specify her diagnosis. Even so, Garcia mostly meets the challenge. She makes us care about her character.

Meanwhile, we also root for Bunny. In this production, she’s a blonde whom Vanessa Morosco lively portrays with a commanding demeanor, a loud voice, a zest for life and a seductive, somewhat airheaded manner.

Yet, Morosco finds the humanity in the character. She portrays her as more than just a drama queen. For instance, the performer makes it clear that her unpredictable Bunny truly loves Artie, and truly wants him to fulfill his dream. Also, importantly, the bond between the two is convincing and touching.

Performance wise, this cast excels at the farcical portion of the play. The performers basically execute controlled chaos to near perfection. But again, this isn’t a traditional farce. As an example, you won’t find multiple doors which open with a bang and slam shut. However, there are folks, including some celebrity-obsessed nuns, running around like crazy. And for good measure, there are multiple locks on one door.

While the production succeeds from a comic standpoint, we’d welcome more surrealistic effects. Kirk Bookman’s lighting, for instance, could be more varied, intense and otherworldly.

On a more positive note, as Artie dreams, ghost-like voices sing one of his mediocre songs. Those voices, which drift from offstage, emit a strange sound. It reverberates onstage, or more specifically, Shaughnessy’s 1965, Queens apartment. Scenic designer Victor A Becker renders it shabbily and realistically, but without a ceiling. The latter fact, along with those ghost-like voices and a striking, vivid visual at the end, help to reinforce the play’s surrealism.

Surely, you’ll walk away from this play with much to ponder – fitting right in with Palm Beach Dramaworks’ mission. Meanwhile, an added bonus is the play, and this production of it, while not perfect, is enormously entertaining.

Criticism aside, to steal a phrase from the Gershwin brothers, who could ask for anything more?

Palm Beach Dramaworks’ production of The House of Blue Leaves runs through June 2 at the theater, 201 Clematis St. in West Palm Beach. Show times are 7:30 p.m. Wednesday, Thursday and some Sundays; 8 p.m. Friday and Saturday as well as 2 p.m. Wednesday, Saturday and Sunday. Post-performance discussions follow Wednesday matinee and Sunday evening performances. Individual tickets are $75. Student tickets are available for $15, while pay your age tickets are for sale for those 18-40. Tickets for educators are half-price with proper ID (other restrictions apply). Call (561) 514-4042 or visit www.palmbeachdramaworks.org.