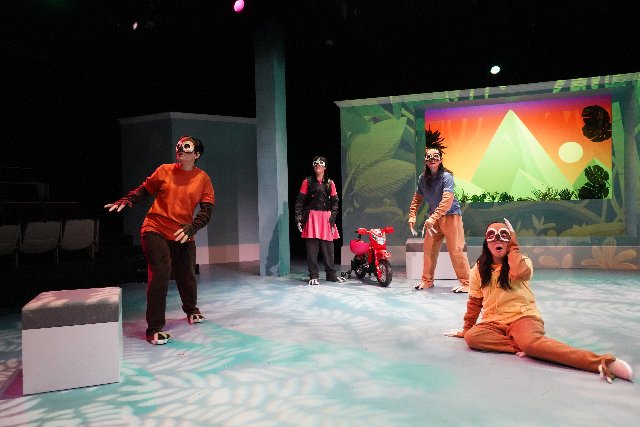 I know.  Your first question will be “What’s with that name?”  Each of the three elements in the title reflects something of significance in the play.  It wouldn’t be my choice, but at least you can say that it represents the many layered nature of the narrative.  Playwright Sam Chanse has created a highly involving entertainment in this world premiere, propelled by the dual engines of humor and empathy.  Vignettes touch on a veritable compendium of issues that women face in life while mixing in a big dollop of environmentalism.  Its most significant weaknesses are that it can seem a little preachy and that unseen male characters are uniformly flawed or bad.  However, an otherwise fine script and an outstanding production yield a highly pleasing result.

Four API-American (that’s Asia Pacific Islander) sisters comprise the dramatis personae and the centrality of the story line.  Erin Mei-Ling Stuart is Amy, a marine biologist who not only has the most successful career of the sisters, but acts as the family anchor, always empathetic and ready to help.  Rinabeth Apostol portrays Constance.  She writes for animated children’s television programs but isn’t always happy about some of the concessions that she must make in depictions of female and minority characters.  Sango Tajima is Mac, the youngest of the group.  Although she was very happy in a job that she had held for years, she left under undisclosed circumstances and has been living at Amy’s house while she seeks a new way forward.  Finally, Lisa Hori-Garcia plays Lina, the mystery sister who rarely stays in touch.  Although she has a career in the arts world, her husband plans to move to a community where there would be no call for her professional skills.

Rather than a forward moving plot, “Monument…..” is more a well-assembled kaleidoscope of unfolding episodes that reveals its characters.  Themes of the uphill battles that women face include male priority and dominance, starting often with their fathers; sexual harassment; unfair behavioral standards, and more.  But while the topics aren’t new, their depictions are fresh.

Constance makes keen observations about gender discrimination that a man is usually less aware of than a woman.  She discusses the delightful animated movie “Ratatouille,” in which a Paris rat becomes an esteemed chef.  That’s okay, but her beef is that all of his sewer rat associates are voiced by males, which is probably unnoticed by most viewers.  Her point – if they were all females instead, the audience would undoubtedly wonder if they killed off all of the male rats.  She also notes that in the animated series that she writes for, the heroine, Magdalena, is the only female.  But Constance bemoans that Magdalena is characterized as expert in many endeavors in order to establish her credibility with viewers, whereas a man wouldn’t need all those qualifications in order to be the hero.

Two of the sisters’ professional activities tie into the ecological aspects of the story.  The characters in Constance’s animated adventure series are sloths, and audience of the play is regaled with the symbiosis and vulnerability that results from sloth’s pooping!  In addition, Amy gives lectures on coral building, which also depends on symbiosis, as well as the death of coral by bleaching, which comes from the collapse of fragile natural relationships.

“Monument, or Four Sisters (A Sloth Play)” is a delight.  The playwright introduces topics of great moment and invests them with an apt balance of poignancy and hilarity.  She has created lively and complex characters that we are drawn to, and who are played with consummate skill by a wonderful cast that exude emotions as varied as playfulness and gravity from the script as required.

In addition, Magic’s production, deftly and richly directed by Giovanna Sardelli, turns the play into a multidimensional confection.  All of the creative designers add to the splendid outcome, however two have the most visible impact.  Sarah Phykitt’s videos are very active throughout, but those of the animated television program clips are particularly striking.  In conjunction with those video diversions, costume designer Michelle Mulholland excels.   The four actors play the comic sloths Magdalena and her male followers on the stage in costumes that fit the silliness of the skits.

“Monument, or Four Sisters (A Sloth Play)” is a world premiere written by Sam Chanse, produced by Magic Theatre, and plays on its stage at Fort Mason, Bldg. D, 2 Marine Blvd., San Francisco, CA through May 29, 2022.