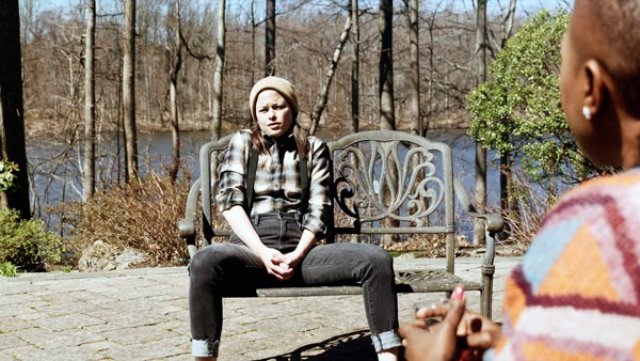 What a difference a production and medium can make. The first time I saw Tiny Beautiful Things I was unmoved.

But I’ve just watched the streaming video production by the George St. Playhouse in New Jersey directed by David Saint and the piece deeply moved me.

Certainly I felt the actors and director got beneath surface and mined the emotion of the piece. But also, it was a video, so lighting could be more intense and close ups let you see tiny facial expressions.

I’m still not a big fan of the piece, but this production did let me see its merits.

The play is based on a popular book of the same name which is a compilation of letters/emails to an on-line advice columnist (Sugar) and her responses. In the responses she tells quite a bit about her own life as she answers questions about love, marriage, divorce, romance, jobs – the usual topics.

Aspiring authors are always told to “show not tell” – meaning don’t tell the reader/audience what happened or what characters feel, think or do, but by showing the action, events, words – let the reader or audience draw his or her own conclusions. This play (and I suspect the book) tells us; and depends on the actors to draw us in and feel the emotions.

Nia Vardalos (My Big, Fat Greek Wedding) is billed as the adaptor with Marshall Heyman, Thomas Kail and Vardalos are billed as “co-conceivers.”

The play opens with an anonymous author (a man) emailing a woman writer he knows to ask if she would like to take over being “Sugar,” the popular online advice columnist even though it doesn’t pay anything. She agrees. She is a wife, mother and writer struggling to make ends meet. Why does she put aside work on her next novel to take on this non-paying “gig”? We never know.

The 90 minute performance, consists of three “readers” here given names if not characters asking her questions, sometimes challenging her and hearing her answers. No real conversations among characters, no real context for their questions or problems and no real solutions.

Her answers often seem tangential to the problems the readers face, but as “Sugar” thinks out loud and free associates, she does offer indirect guidance and sometimes, a new way of looking at things.

We learn a lot about “Sugar” who has had a life that is packed with drama – a failed marriage, drug addiction, and much, much more. She has lived! But does that make her competent to help others through their issues?

The three letter writers, here named Alfredo, Natalie and Phillip do not really play characters, so much as recite the letters and then listen and react to Sugar’s often wandering responses.

The real problem is we don’t get to know any of these people, including her. By the end, she is just a person who has had a really messed up life and survived; how we don’t know. The writers are just that, anonymous people.

Sugar is played beautifully by Laiona Michelle. She brings nuance to the role but even she can’t overcome some of the problems with this enigmatic character and her motivations. Michelle is helped by the close ups that register every little emotion.

The letters writers are also well played by John Bolger as Alfredo, Kally Duling as Natalie and Ryan George as Phillip. They don’t really need names because their personas change based on the letter they are reading.

The real stars of this production directed by David Saint are Helen Tewksbury, the art director, Scott Killian who provided sound design and original music and cinematographer Michael Boylan.

It is so beautifully filmed that it seems wrong to question why a struggling writer who mentions several times the mountain of debt she has, is living in such a modern, spacious and upscale house on a lake.

Tiny Beautiful Things is available through May 23. For access visit GeorgeStreetPlayhouse.org