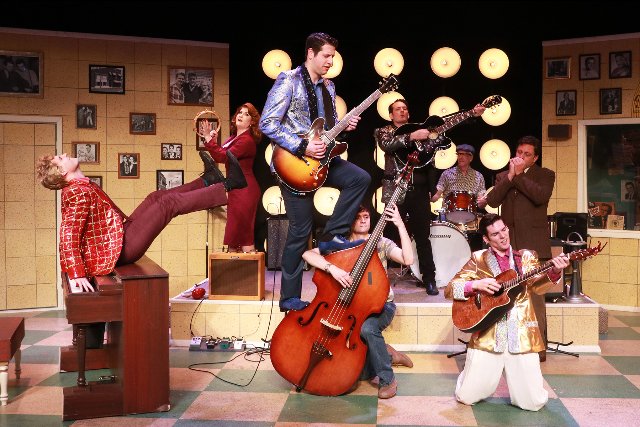 (Photo by Alberto Romeu) The cast of Million Dollar Quartet jam it out. 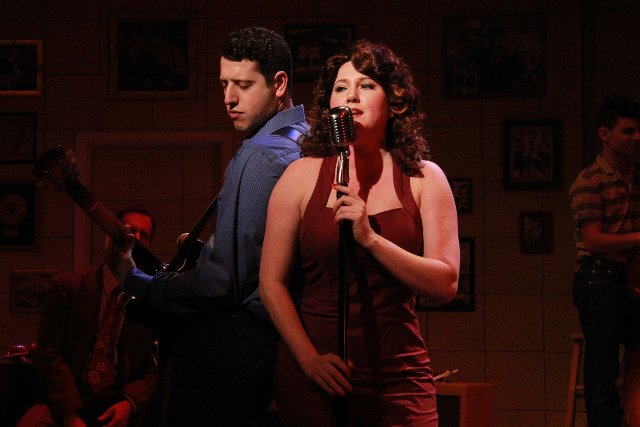 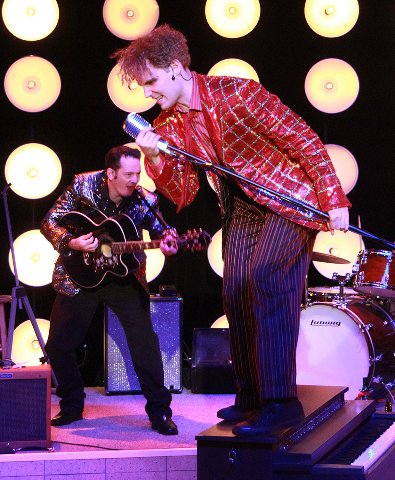 What do Carl Perkins, Johnny Cash, Elvis Presley and Jerry Lee Lewis have in store for an encore in Actors’ Playhouse at the Miracle Theatre’s much-anticipated return engagement of Million Dollar Quartet?

The foursome has re-created sounds that seem more crisp and controlled, without losing the vibrancy and electricity audiences ate up during the 2016 production.

This time around, the sound is easier on the ears. Following the 2016 staging, it seemed the show was better suited for the 600-seat mainstage auditorium than the 300-seat balcony theater.

Thankfully, that’s not the case this year. It’s also easy to appreciate the sense of immediacy in the more intimate space.

The Tony-nominated Million Dollar Quartet is among Actors’ Playhouse’s “most acclaimed (and long running) productions in its 30-year history” according to press material. It ran for more than two months in 2016. This year, it’s scheduled to close June 24.

This high-voltage show provides jolts of invigoration sorely needed today, when listening to the news can wear you down.

A nostalgic effect, especially among certain age groups, will work its magic as classic hits reverberate. Songs such as “Blue Suede Shoes,” “Down by the Riverside,” “Great Balls of Fire,” and “Whole Lotta Shakin’ Going On” will whisk you back to late 1950s Memphis. More specifically, the show transports us to Sun Records Studio, owned by Sam Phillips, The “Father of Rock ‘n’ Roll.”

Scenic designer Gene Seyffer has rendered the studio, appropriately, in yellow, with photos that tell a pictorial history of this ledgendary business. Meanwhile, lighting designer Eric Nelson uses a variety of hues to brighten or darken the place, depending on a scene’s mood.

Million Dollar Quartet might be a “Jukebox Musical.” But while, like most shows that fall within this genre, the plot is thin, Million affords more than a concert of haphazardly-arranged songs. The widely-recognized hits fit within the context of this inspiring true story.

It revolves around an iconic evening – Dec. 4, 1956. That’s when Lewis, Perkins, Cash and Presley entered the studio for different purposes. However, as different as they may have been, their shared love of music led them to partake in what many consider one of the greatest jam sessions of all time.

There’s a whole lot of shakin’, hip swivelin’, dancin’, clappin’, and singin’ happenin’ on stage. But this is also a tale of loyalty, legacy, determination, pride, vulnerability, celebration, contemplation, ill feelings and change. In short, it’s a story of highs and lows, mirroring the ups and downs we experience throughout life.

The sense of “The Old Guard” reluctantly making way for a new generation plays out through a conflict between Perkins and Lewis. The former, called “the King of Rockability” arrives at the studio. He hopes to reclaim some of his fame as a founding father of rock and roll. Standing in his way is, among others, Lewis. The young up-and-comer represents a new breed of musicians.

A chilliness is also palpable between Perkins, who wrote “Blue Suede Shoes,” and Presley. “The King’s” voice became synonymous with the song after multitudes heard him singing it on television. That angers Perkins, who feels he’s not receiving adequate credit.

We can keenly feel the tension resulting from these and other conflicts. Credit the quadruple-threat performers, who act, sing, dance and play instruments.

Artistic Director David Arisco guides them. He knows how to milk a comic moment for its greatest effect and make heated moments feel palpable. Arisco also gives the cast the freedom to hold nothing back in order to fully reveal each character’s personality.

This is certainly the case with Dominique Scott as Lewis. This performer won the “Best Supporting Actor in a Musical” Carbonell Award for his 2016 performance of this eccentric.

Scott sports mussed blonde hair and dons a colorful, stand-out costume to match Lewis’ large personality. He speaks and sings in an excitable, high-pitched voice. When he plays the piano, his body gyrates. Scott has some jaw-dropping surprises in store. They showcase Lewis’ acrobatic piano-playing abilities. What’s most impressive about this performance is that Scott conveys his character’s abandon without calling attention to himself.

While Scott’s Lewis is filled with youthful eagerness and pride, a different type of conceit pervades Jeremy Sevelovitz’s Perkins. He makes the man all ego, an in-your-face veteran who’s not about to let some rookie steal his spotlight. Sevelovitz, who also returns to the production, stomps in and out of the room with purpose and command, while singing forcefully without straining.

Sevelovitz wears blue. After all, his character wrote "Blue Suede Shoes." Sky Seals, by contrast, sports nearly all black. It’s an appropriate color for Cash, who arrives at Sun Records not all that sunny. There are some dark occurrences that have happened in his life. Cash, with stylish, slicked-back black hair, might be brooding a bit. However, Seals ratchets up the energy, creating considerable heat, and sometimes croons, as he energetically sings.

Speaking of heat, a charming and sexy Lindsey Corey, part of the 2016 cast, lends Presley’s girlfriend, Dyanne, a sultriness and showmanship that makes you believe she’s one of the guys.

The actors never settle for impersonations. That’s especially true with production newcomer Corbin Mayer as Presley. He has all the requisite fancy dance moves, crooning voice and dimples to suggest “The King’s” charming smile.

There are moments of camaraderie and others of dissension between this foursome, who can thank Phillips for jumpstarting their careers. The versatile, award-winning actor Gregg Weiner makes it clear that he adores and is fully-committed to his “boys.” When at least one of them relays bad news, the pain and frustration etched into Weiner’s face is convincing. Weiner, speaking in a genteel southern drawl, delivers an impressively natural performance, conveying the intensity and ambition characteristic of this man.

Phillips narrates this show, which is told in flashbacks. It never fails to keep your eyes riveted to the stage – or your toes tapping and hands clapping.

Million Dollar Quartet is scheduled to end its run on June 24 at Actors’ Playhouse at The Miracle Theatre, 280 Miracle Mile in Coral Gables. Tickets for weeknights and matinees are $57, while Friday and Saturday evenings are $64. The theater offers 10 percent off all weekday performances for seniors and $15 student rush tickets to any performance 15 minutes before curtain with I.d. Discounts are based on availability. For tickets, call (305) 444-9293 or visit www.actorsplayhouse.org.