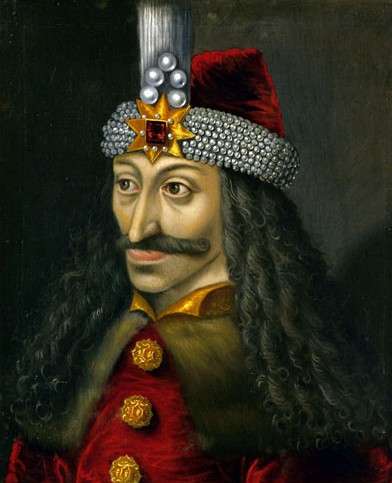 Vlad the Impaler evoke an incarnation in the repressive autocrat Vladimir Putin. 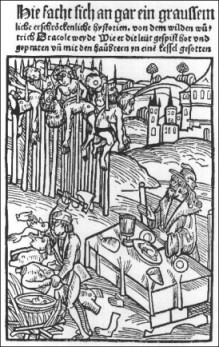 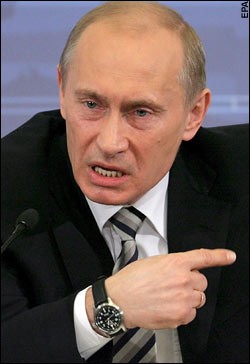 The ancient Vlad channels the contemporary one. 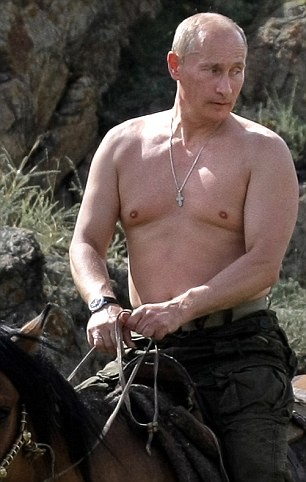 The "manly" Putin attacks the rights of homosexuals. 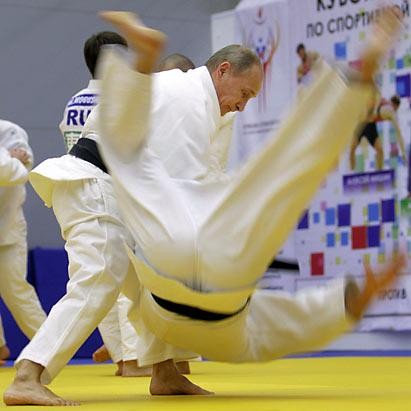 Under communist rule, the Soviets most often used the arts for propaganda. This produced both wonderful films like those of Sergei Eisenstein (Alexander Nevsky, Battleship Potemkin) and the less successful Constructivist and Social Realistic art. In literature, many creative writers were silenced. In theatre, it is hard to come up with a single great playwright after Chekhov (The Cherry Orchard, Three Sisters, Uncle Vanya).

When unfettered, Russia has a rich and wonderful tradition of feisty writing and theatre, and the use of swear words is part of its masculine, warlike heritage. Even during the cold war days under Joseph Stalin and Nikita Khrushchev the people might have been scared shitless to say anything derogatory politically, but standing in a line to buy groceries bitching and moaning reached great heights of creativity, and were laced with truly colorful expressions.

Last year saw an edict about the use of obscene language online and now it seems the censorship is spreading.

Vladimir Putin has signed a new law prohibiting swearing in public performances, including cinema, theater and other forms of art. The law will come into effect on July 1, and afterwards swearing in films, plays and concerts will incur penalties of up to 2,500 rubles ($70) for individuals and up to 50,000 rubles for companies and organizations.

So what is involved? Back in December 2013, the Institute of Russian Language at the Russian Academy of Sciences compiled a list of four words that constitute swearing and will thus be banned. Two depict male and female reproductive organs, one describes the process of copulation and the last refers to a promiscuous woman. The ban is providing a major source of employment for government rule makers as they try to include all the permutations of words like whore and the infamous F bomb. There are many. And the question is whether it applies to just the Russian language, or if it extends to all of the world’s languages. For example, as of 2009, at least a portion of the Bible had been translated into 2,508 different languages, still a long way short of all those in use in the world.

Deciding which words are forbidden

Technicians are making lists of keywords for the searches as they manually monitor the Russian language sector of the internet. The current version of the software only scans text, but in the future it will be also work with audio and video files. Putin’s censors have come up with two lists of swear words – those that were completely outlawed and those that were allowed under condition that printed and internet media publish them under “16+” parental advisory.

The amount of obscenities in the Russian mass media had dropped dramatically because of the new regulations.

According to the Moscow Times, the Culture Ministry – which is in charge of overseeing the work of theaters and also issuing movie distribution certificates – the newly passed measures will only concern mass culture and will not concern art.

Of course, like their demonization of anything to do with homosexuals (which is not meant to target homosexuals) there is a lot of double-talk and back-watering involved. Sort of like Republican claims that they care about the poor while not raising the minimum wage. To anyone with half decent reading comprehension, the scam is transparent. Read on to see how the word manipulation works.

“The law is not aggressive; its only aim is to regulate this sphere, so that swearing will have its purpose,” Irina Kaznacheeva, the ministry’s spokesperson. It will be up to the artistic director to decide what to do with swearing, whether to break the new law or not, we will not interfere in the process,” she said.

Many theater directors and playwrights have complained that the new law is effectively in conflict with intellectual property legislation, according to which authors’ works cannot be changed.

“We discussed this situation at our artistic meeting and decided that we will preserve all artistic texts, keeping swearing in them, but prohibiting actors from improvising,” said Varvara Faer, director of the BerlusPutin play at Moscow’s teater.doc independent theater.

The play satirizes the relationship between Putin and former Italian Prime Minister Silvio Berlusconi, with the main character being a hybrid of the two politicians.

“I am against the use of swearing in life, but I believe artists can use it in their works, in case the work is truly artistic,” she said.

With Vladimir Putin’s signing this expansion of the law to include literature and art (including concerts, theatre, plays and public movies) combined with his hostility to even the mention of the word gay in public discourse, it is likely that Russia’s great artistic heritage will descend into a mediocrity that could challenge American popular culture. The use of charged worlds has little effect on the quality of output, but having laws limiting artistic expression kills creativity.

Reposted courtesy of Larry Murray and Berkshire on Stage and Screen.