A Drive In Performance 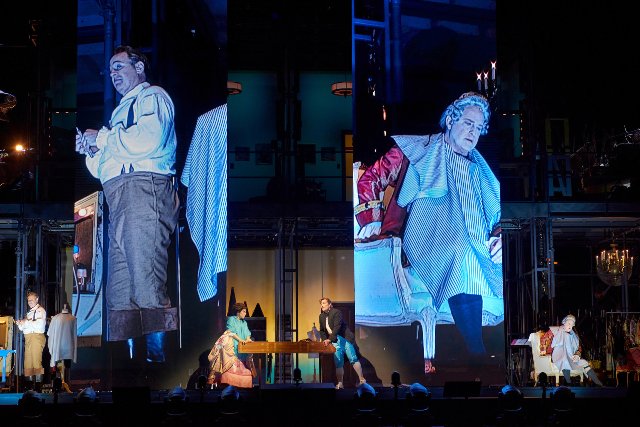 Desperate times call for desperate measures.  With the stage of the grand War Memorial Opera House dark for over a year, the San Francisco Opera fashioned a creative fix – not a permanent solution, but one which offers a measure of the thrilling artistry that only live opera can provide.  In overcoming myriad technical, logistical, marketing, and public health issues, the company has produced a wonderfully charming “Barber of Seville” that will live in our memories. Gioachino Rossini’s 19th century imagination could probably conceive of people driving automobiles, but patrons attending one of his great comedic operas while ensconced in their vehicles would probably be beyond his wildest notions.

Rossini’s “Barber” ranks as one of the most revered opera buffa in the repertoire.  Full of silly characters and silly situations, it tantalizes the funny bone.  At the same time, it is replete with wonderful music.  This adaptation operates under the pleasant conceit of a day of rehearsals, culminating with an evening performance.  Thus, the artists initially appear in contemporary casual costumery and progress toward 19th century dress as time progresses.  The “Barber” narrative is enhanced by announcements from an unseen stage director, including social distance warnings, as well as live and video back stage antics, which add to the fun.

This production contains an ideal cast with deep San Francisco Opera roots that would be the envy of any opera company.  Lucas Meachem plays the title role, and from the opening familiar-to-all “Largo al factotum,” he demonstrates that he possesses the vocal dexterity and magnetic appeal of a memorable Figaro.  Reprising their casting as the lovers several years ago, Daniela Mack and Alek Schrader perform as Rosina and Lindoro (who is really Count Almaviva).  Notably, the artists are married.  Mack also happens to be several months pregnant.  In a playful acknowledgement and despite Rosina’s being single, her first costume reveals the large bump, though later costumes showed that the pregnancy could easily have been hidden.  The pair are superb together and apart, with the highlight being Mack’s “Una voce poco fa,” which she embraces with a warm coloratura vibrato.

A remarkable trio comprises the remaining principals.  Philip Skinner is powerful as Dr. Bartolo, Rosina’s guardian.  The company’s legendary Catherine Cook as the maid Berta and Kenneth Kellogg as Don Basilio are admirable as always, this time in roles with little song time, but the latter does deliver the bass aria “La Calumnia” with flair and conviction.  Apart from great solo numbers, “Barber” possesses ensembles, some with six or seven voices. These rapid fire, high wire vocal explosions are given with great precision and fine humor.  Supporting the singers is Maestro Roderick Cox’s orchestra.  Due to logistical and pandemic conditions, the orchestra is limited to 18 instrumentalists, and it performs out of sight.

Setting aside the beloved opera and sterling performances, the production suffered three possible deficiencies before even getting to the drive-in, in this reviewer’s mind.  The opera is perhaps overly familiar to a frequent opera goer; it is condensed to 90 minutes to meet Covid protocols; and instead of glorious acoustic music, it is piped electronically through FM radio.  Upon arrival at the venue (Marin Center, which is a stellar Frank Lloyd Wright designed multi-purposed civic campus for the county), another possible fault was finding that it was being sung in English.  Much to my surprise, in the overall, those concerns were more than adequately addressed.  Although trimming the opera’s length results in a jumpy and incomplete plot line, the good news for those who know the opera is that it hits all the high spots and eliminates the drag.  And while the acoustics of War Memorial are superior to any vehicle’s sound system, voices in particular come through with sufficient glory to make the listening well worthwhile.   Finally, opera almost always fulfills its intentions best in its original language.  However, the comic material of “Barber” in some ways benefits from being sung in words comprehensible to the listener’s ear, with supertitles in the same language.  So despite my misgivings, and perhaps because of the uniqueness of the experience, I enjoyed this version better than most all I’ve seen.   Concerns satisfied.

Many kudos go to General Director Matthew Shilvock and his team for accomplishing a project with a wide scope of demands that go well beyond those required when operating within one’s own home base.  Stage Director Matthew Ozawa orchestrated his creative directors to assemble a lively milieu for the production.  Masterfully adapting sets originally designed for the cancelled production of “Fidelio”, the stage is comprised of compartmentalized spaces on two levels, flanked by large video screens.  Projection screens often overlay the stage as well.  One positive aspect of this drive-in format is that there is more to look at.  While viewing the live performance gives a broad visual perspective, simultaneously, the screens provide more intimate close-ups.

Indoor live performance cannot return to the Bay Area too soon.  The intimacy of the stage; the immediacy of the performers; and the ambiance of the event are irreplaceable.  Yet, this format could have legs, especially for newcomers to the art.  Assessing this experiment on a slightly different set of criteria than used in traditional formats, it is a delightful romp and a magnificent piece of work, worthy of the world-class company that San Francisco Opera is.

“Barber of Seville,” composed by Gioachino Rossini, with Italian libretto by Cesare Sterbini, translated to English and adapted by Marcie Stapp, is produced by San Francisco Opera, and plays at Marin Center, San Rafael, California through May 15, 2021.