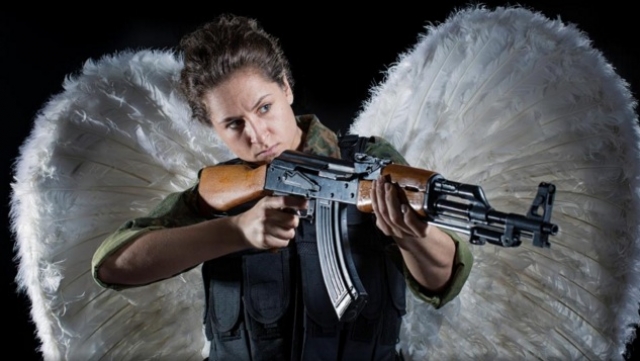 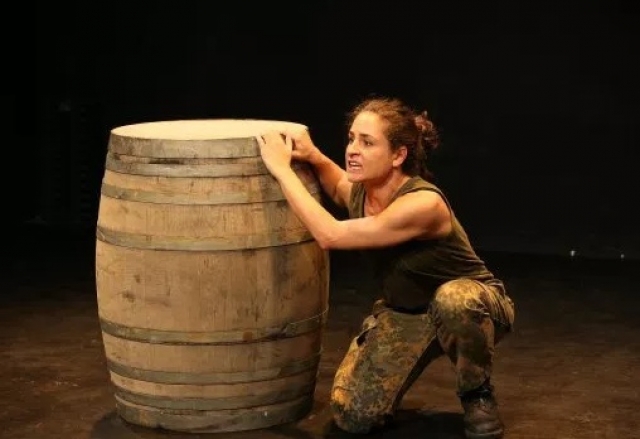 Angel makes a barrel her partner

Women in the world of war unite these two one act pieces in a riveting productions at 59E59 Theaters Brits Off Broadway festival. Written by British polymath Naylor, actor, comic and now writer, they tackle unfamiliar but timely subjects in simple yet infinitely rich styles.

Echoes weaves together the lives of two British women who leave Ipswich to marry far away men. Tiliie’s husband, a lustful lieutenant, strongly demands that fill her duty to God and country by sexual availability to him. Tillie has left for India almost two centuries ago and ends up in Afghanistan. Rachel Smythe plays the role with dignity and much verve.

Samira, a Muslim, ends up as one of the wives of a fighter for the Islamic caliphate in East Anglia.

Yes, the subject is dark, but Naylor steers right into humor. When Samira tells the tale of her radicalization by Nigel Farrage while she is working in a bookstore, it feels like standup comedy. Serena Manteghi brings a feisty toughness to the character, which could easily be squashed.

Lighting effects provide a separation of the scenes with each women, as the tales are tightly wound.

Angel is also about war in the Middle East, but here more is at stake for the young girl who would be a lawyer. The brew of humor and drama is deeply mixed. To make this work requires an actor of power and range. Russian-born, Berlin-raised, London-trained Avital Lvova is that actor,. She is capable of conveying intensity and diversity of feelings through facial expressions This was evident especially as the young Angel describes her first encounter with predators in the Banyon tree on her family farm. She father’s instructions on shooting an AK rifle are terrifying.

The singular power, the shapely arc from a father and daughter conflict about her future, to his impact on her destiny as a sniper, is created by the extraordinary Avital Lvova.

The actress has both a musical range in her voice, from girlish teasing to the authority of a warrior. The play is an hour long monologue, in which she creates many characters, most of them male. In addition to her father, she becomes a young ISIS convert, sitting in the family Banyan tree, terrorizing her.

He crops up regularly, trying to co-opt her, overcome her and finally defeat her. She avoids sex with him by placing her own blood between her legs. She dreams of shooting him. If you’re killed by a woman you can’t go to heaven and have 70 available virgins. She tortures this man and learns to shoot men in defense of herself, other women and her homeland.

Consummately physical, Lvova takes the variety of language Naylor has written for her and slithers, tiptoes, crouches and dances her way through this moving story. Her gestures are often small, a flash of the eye, a darting arm, but together they form a grand performance.

Emma Butler directed Echoes. Michael Cabot elevates the drama in Angel. He has known the playwright since his early days as an arrogant actor.  Naylor reports that he enjoys turning over his work to Cabot a stalwart at the London Classic Theater. Angel makes clear why. Language, movement and lighting are subtly but firmly deployed to create great theater.

Angel and Echoes are unusual, surprising and completely satisfying theater. Fully-realized Muslim women on stage are an added bonus. The productions leave you breathless and pensive after you’ve also laughed at the charming conceits of the challenged woman we come to know. In the dramas, ordinary people become monsters. We learn how.