Is it here to stay? 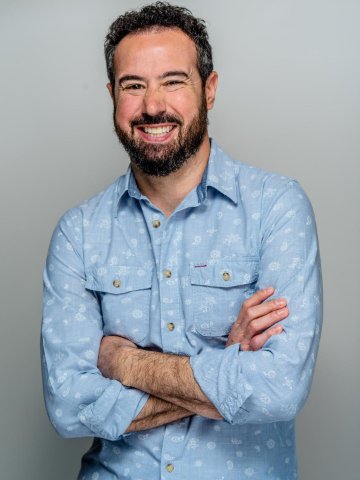 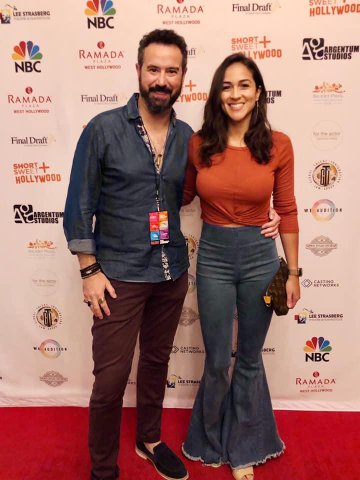 “Shhhhhh! It’s about to start!,” someone commented in eager anticipation of No Pants Theatre Company’s production of Samuel Garza Bernstein’s drama, If You Are Reading This.

Most likely, the commenter was being facetious. In fact, there was no reason for anybody to refrain from commenting — even during the show. Surely, the comments would not disturb the actors. Not in this medium, anyway.

And so, the audience praised the script and actors before and during the production.

“The writing is delicious (and the) cast (is) so good,” someone opined.

“Love the script…hard, realistic, raw,” yet another audience member observed.

“Nuanced, great reveals, well-directed. And in such a tight space!,” someone else noted.

In particular, rectangles far smaller than windows dotted an otherwise mostly-dark computer screen. Within each of these shapes, a cast member sat in character. The outlines of the closely-positioned rectangles lit up in green to indicate an actor speaking in character. Although the performers each occupied their own spaces, their surroundings seemed to blend into one setting for If You Are  Reading This. In the play, the past collides with the present as a family meets to look over their late mother’s Upper East Side New York brownstone.

With a pandemic plaguing the world, many theater companies are turning to live streaming platforms so that people can remain safely in their homes while experiencing live theater. But No Pants Theatre Company is unlike others. Indeed, if the pandemic never happened, No Pants would never have existed.

The company’s artistic director, Jason Weiss, founded No Pants in mid-March specifically in response to the pandemic.

Weiss, a theater artist for about 27 years, said that he’s aware of at least four other companies which exist for the same reason.

“I would bet that there’s dozens of them,” the Los Angeles-based Weiss said. “They’re popping up constantly.”

Regarding his company, Weiss said he came up with its name to reflect the fact that live streaming theater, unlike mainstream, doesn’t impose rules on audiences. Instead, folks can watch a live-streamed play in a relaxed atmosphere with no dress code.

“As always, pants are optional,” he said.

If people arrive late, no usher is going to make them wait to take a seat. Also, nobody will insist that they silence their cellphones. And if patrons wish to text during the performance, they can feel free to do so. Meanwhile, leaving early won’t disturb anybody. In addition, there’s no “social pressure” to sit through the play.

As for himself, Weiss said he doesn’t have to pay a landlord rent to house his theater in a building.

A conversation over coffee precedes a virtual theater company’s birth

Weiss and Serrano founded No Pants Theatre over coffee in March. At the time, they were anticipating an imminent “shelter in place” order from Los Angeles officials.

Weiss told his wife that he felt the order would be tough on actors, other artists and local businesses. Then, he asked Serrano if she’d be interested in holding a play reading on Zoom.

“She said ‘that could be interesting,’” Weiss recalled.

The next day, Los Angeles city officials imposed a “shelter in place” order. That same day, Weiss committed to a play reading without an audience, intended only for actors he knew. By the way, Weiss said he knows “thousands of actors” of all skill levels. After all, in his words, he’s a “pretty in-demand acting coach.”

For this first reading, the multi-faceted theater artist assembled 15 actors, hailing from as far away as Australia. They eagerly wanted to participate, Weiss noted. But before the reading, Weiss asked cast members if he could include an audience. Their unanimous response was “yes.” And so, he sent out invitations, to which about 100 people responded. They watched the reading of Stephen Adly Guirgis’ The Last Days of Judas Iscariot. The play centers on a court case over the ultimate fate of the man widely known to have betrayed Jesus.

“Everyone loved it,” Weiss said. Following the play, he invited the patrons to a Q&A with the actors. They posed questions to the audience, which, in turn, asked the performers questions. For instance, company members asked the patrons what it was like to experience live theater while seated on their couches.

While the responses varied, “everyone had great things to say,” Weiss noted. “In general, they were engaged and could watch the play without having to adhere to restrictions placed on audience members in mainstream theater.”

In fact, one patron stated that she was able to make dinner, give her daughter a bath, put her to bed, and pour a glass of wine for herself and her husband – all while watching the play.

Further, the benefits that live-streamed theater presents for patrons can extend beyond the actual performance. For instance, Serrano said that audiences might be able to fit Q&A talk-backs into their busy schedules. After all, they don’t have to drive home; they’re already there. So, perhaps unsurprisingly, following one live-streamed play, about 90 percent of the viewing audience remained for the talk-back, according to Serrano.

But can live-streamed theater feel as intimate as mainstream? In traditional live theater, Weiss noted that some directors seat audiences onstage to create an intimate environment. Similarly, other directors might extend the stage into the audience, allowing actors to speak and move amid the patrons. Yet other productions are interactive, inviting audiences to participate in the action.

On the other hand, companies producing live-streamed productions bring live theater into audiences’ homes. These companies do so live, in the moment, albeit virtually, Weiss said.

“They are inviting us into their homes by clicking the button to watch,” Weiss said. “That is so sacred to me and I’m flabbergasted at that opportunity. I take that as a responsibility to provide entertainment, escape, (and) release, especially now, when people feel alone.”

However, Weiss conceded that his company and others like it cannot truly replicate the audience-actor dynamic that’s a hallmark of traditional live theater.

That dynamic plays out as actors, in the same room as audience members, feed off the energy (or lack thereof) from patrons. This, in turn, causes audience members to respond in a manner corresponding to the on-stage vibe.

Although this dynamic may not exist virtually, patrons can at least comment, on their computers, through chat, about the production as it’s happening.

The more than 100 folks who watched No Pants’ production of If You Are Reading This did exactly that. The comment section grew more animated as the production progressed. It was as though a group of theater lovers were speaking with each other about how much they were enjoying the play and the production.

Unlike in traditional live theater, the preparation process isn’t extensive — at least not for No Pants Theatre Company. In fact, Weiss said that in place of rehearsals, the performers read their scripts and memorize their parts alone. Then, they gather one time for an out-loud read thru. Other than that, they discuss how they might light themselves and what types of microphones might work best. There are no auditions; Weiss chooses from a pool of artists with whom he is familiar.

When it comes time for the performance, audiences can tune in for free.

“You can’t even donate money to No Pants Theatre Company,” Weiss said. “We won’t take it.” He added that the operating budget consists solely of his Internet bill.

“This is about free artistic expression for artists and free entertainment for viewers,” Weiss said.

A big project, a big success

In addition to producing live-streamed performances of plays, No Pants Theatre Company hosted a global 48-hour theater festival. A total of 188 theater artists from all six populated continents participated. Weiss formed teams of five to six. In 48 hours, the teams wrote 34 original, 10-minute plays. The next day, the festival took place. About 1,200 people from all over the world witnessed the festival over the course of seven hours, Weiss said. He announced the festival 10 days before it began.

“It was a lot of work on my side,” he said, adding he had to round up nearly 190 artists in multiple time zones.

The festival’s participants and organizers didn’t enjoy a problem-free experience. Specifically, Weiss said he had to shut down the festival shortly after it began due to “Zoom Bombers,” or hackers disrupting an event. But Weiss was able to re-start the festival, albeit with more stringent security measures.

“The most important takeaway from the festival was to use a streaming service like YouTube Live,” Weiss said. “It’s created more security and allowed for a much larger reach. While using Zoom alone, we were limited to an audience of 300. But by linking Zoom to YouTube Live, we’re now reaching audiences of 700 people per show and growing.”

“Big congrats to everyone!!,” someone wrote. “WOW…you all did an amazing job coming together and making this happen. It was quite an undertaking that you all pulled off with talent.”

Another person wrote, “Thank you all for a great time, and Jason Weiss for making this happen! So many awesome plays and such a highlight to connect with people after three weeks of quarantine.”

The festival has been No Pants’ most ambitious project to date, Weiss said. And, he’s apparently ecstatic with the results.

“I was overwhelmed by the reaction of the 48-hour festival,” he said.  “I never would have imagined we could reach a global audience like that with artists representing such a vast amount of different countries and cultures. I was blown away by the response. We received dozens of emails and messages on Facebook, from audience members telling us how much this festival meant to them. We also received an enormous amount of requests to be a part of the next festival.”

While Weiss said he doesn’t have a set date for the next 48-hour festival, he is planning a college and university theater festival. He suggested that the last play in which college theater students appear leaves an indelible mark on them. However, the pandemic has forced the cancellations of such plays for this year’s seniors.  And so, Weiss is planning a festival which will be open to every college and university in the U.S.

More specifically, he envisions a three-week festival of short plays which college and university students will perform virtually. At the end, a panel of industry professionals, such as writers, directors, and dramaturgs, will decide what they consider to be the top shows. Then, the creators of the top 10 plays will have two weeks to work with a mentor in the field to make adjustments and refinements. Following adjustments, the playwrights and actors will present their pieces to an invited audience of professional industry people. Beyond that, details, such as whether there will be an overall winner, aren’t final.

Is there a future for live-streamed theater?

In the meantime, No Pants Theatre Company, and others founded for the same purpose, continue to mount live-streamed productions of plays. Weiss, for one, said he thinks that in the future, mainstream theater companies will start virtual labs, virtual offerings and “embrace this technology to develop new plays.

“It’s cost effective,” he said. “It allows a theater company to utilize global talent and to test the viability of a play virtually before making a big financial investment to put it up on a major theater stage.

“If that happens, this pandemic, which is horrible, could end up revitalizing the theater in ways no one saw coming.”

Serrano said she doesn’t think live-streamed theater will replace the kind we’ve become used to. Still, she agrees that live-streaming will continue, even after the pandemic passes.

“It reaches an audience that might not normally go to the theater,” she said. “It’s novel and easy for audience members to fit into their schedules.”

Theater in the form of live streaming “comes to you, you don’t have to go to it,” Serrano said. “It’s theater in your living room.”