Queen of Basel in Miami Beach 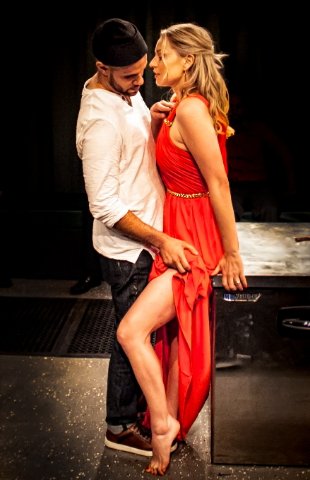 Is it possible to write and stage an August Strindberg play adaptation that’s #MeToo friendly?

Playwright Hilary Bettis and Miami New Drama have succeeded admirably in doing so.

Patrons who enter the Colony Theatre on Miami Beach through May 6 will encounter a vastly re-imagined version of Strindberg’s naturalistic tragedy. It’s titled Queen of Basel.

The world premiere production of this feminist-bent, bi-lingual take on Miss Julie will grip you from the beginning like a tight vice. The play, and this first-rate production, are among the most explosive, visceral. intimate and immersive theatrical experiences you’ll witness this season.

Bettis has moved the action from late 19th century Sweden to present day Miami Beach. This version is not only well-tailored for modern-day Miami, but for a time when the #MeToo movement is making itself heard and not backing down from anybody.

In Strindberg’s naturalistic tragedy, the often-described woman hater depicts Julie as someone with sadomasochistic tendencies.

In Bettis’ play, Julie wishes to use her vast wealth for a worthy cause.

She wishes to donate her money  not just to help others but herself. As wealthy as she is, Julie is experiencing an existential crisis. She needs meaning in her life, beyond the luxury money can buy.

In place of Strindberg’s setting of a “Midsummer Eve” celebration, Bettis sets her play amid the revelry of Miami Beach’s Art Basel event.

In honor of the celebration, revelers are partying at a posh hotel owned by Julie’s father. Like in Miss Julie, the character breaks up with her fiancé before the action begins.

“Every guy I ever dated just sees money!” Julie practically wails as she stumbles into the dingy, dusty hotel kitchen that serves as the primary setting. It’s rendered so realistically by set designer Ika Avaliani that The Colony Theatre seems to disappear. Even as we walk into the reconfigured Colony, we feel as though we’re entering an elegant hotel.

The theater's staff has radically changed the audience seating configuration to makes us feel not like theatergoers, but real-life hotel guests watching the heated proceedings.

Watching Julie stumble hysterically onto the set, betraying a mixture of anger, incoherence, irritation, panic, pain and exasperation, your heart goes out to her.

Graver is joined by two other talented performers who, like her, disappear into their roles.

Bettis has retained the characters of Christine and Jean (renamed John here). However, Bettis has fleshed out the trio, making each character multi-dimensional, flesh-and-blood, people.

Speaking of blood, it spills. It might symbolize the unraveling of these people’s lives.

The big emotions, weighty issues and power struggles might make you feel as though you’re watching one of Shakespeare’s towering tragedies.

Meanwhile, the lust, desire for freedom and intense need these characters feel brings to mind a steamy Tennessee Williams drama.

Over the course of under two hours, we watch a tug-of-war. Heated arguments keep us riveted. They revolve around topics such as class, power, immigration, the American Dream, gender, loyalty, assumptions and social status. Surprising revelations leave us gasping.

Bettis’ language is articulate, wry, lively and urgent. However, for the most part, the playwright doesn’t preach to us.

The play’s main action revolves around a demand from Julie’s father (unseen) that she return home. But the strong-willed woman isn’t about to let dad push her around. Her refusal to come home creates a palpable conflict between the three characters.

Julie, who is vastly different from the other two, is stuck with them in a cramped room. Authorities have towed John’s uber, where he’s left his phone charger.

Perhaps forcing people into such situations works in these divisive times. It could prove beneficial in beginning barrier-breaking, meaningful dialogues.

“We’re stuck in purgatory, we might as well talk to each other,” John tells Julie.

While the back-and-forth exchanges take place in this kitchen, the steady but muffled beat of music from the party in the other room is barely audible. It’s as though the beat is prodding us to awaken from our indifference to important issues.

During one particularly powerful moment Christine enters. The beat from the party room grows steadily more intense until it’s almost deafening. Harsh, white, almost blinding light illuminates and fog envelops the stage. Christine arrives at a startling, upsetting revelation. In shock and frustration, she throws a glass, which shatters. It’s not the only thing shattered in this play.

This scene represents just one of many powerful ones for these first-rate performers.

Graver is chameleonic in her ability to seamlessly segue from one potently expressed emotion to another. At times, you fear Graver will hyperventilate. Yet, it all appears and sounds so natural.

Rudi Goblen invests John with an in-your-face, rough and brutally honest persona. The actor’s body language makes it appear that John is always primed for a confrontation. He’s like simmering lava, about to explode. And when John does, Goblen evokes a thunderous menace. Still, the performer softens his character during scenes that call for a more mellow, intimate and charming man.

Christine and John sometimes speak to each other in Spanish. It’s curious as to why the technical staff hasn’t projected subtitles onto a board when John doesn’t translate for Julie. She’s a “Gringa,” who is not as fluent in Spanish.

All in all, though, it’s hard to find fault with this Miami New Drama production, directed with sensitivity and detail by artistic director Michel Hausmann.

Under his leadership, this daring theater company has staged works that speak directly to Miami’s diversity.

With Queen of Basel, Miami New Drama has commissioned a piece that, unlike Strindberg’s play, is sympathetic to women. At the same time, it doesn’t pretend that they’re perfect.

“Hilary created a feminist response worthy of having Strindberg roll in his grave!,” Hausmann wrote in a program note.

He’d roll further in his grave if this play ended not as a tragedy, but in triumph from Julie’s perspective.

Still, the tragic ending evokes pity. It’s not a tragedy brought on by the title character. The cause is a society that cannot accept, among other things, a wealthy, pretty, seemingly flawless woman who has weaknesses.

But everybody has faults.