The Crucible, an Opera by Robert Ward 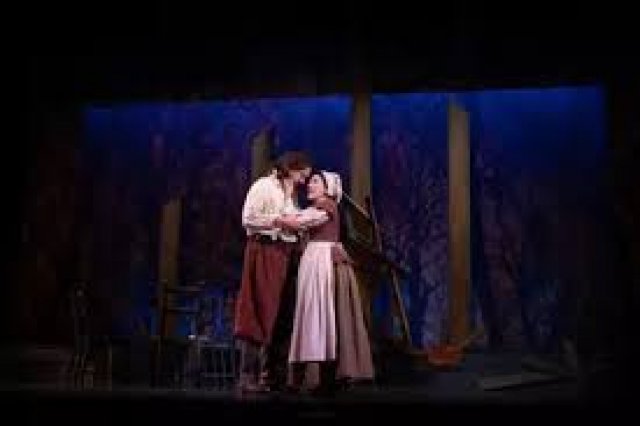 The Crucible by Robert Ward at Opera Santa Barbara

Can the girls be saved in The Crucible, streaming from Opera Santa Barbara 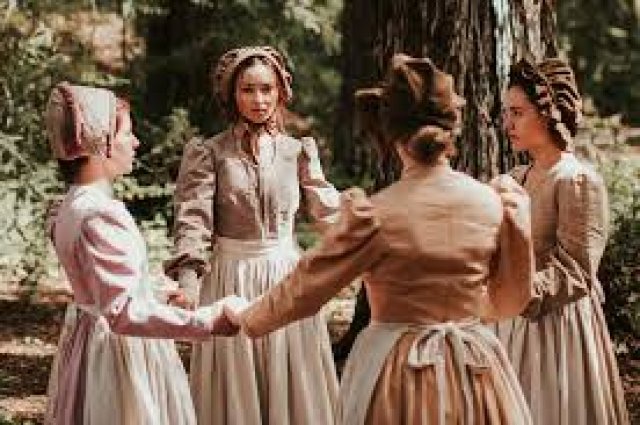 Santa Barbara Opera is streaming Robert Ward's Pulitzer Prize-winning The Crucible based on Arthur Miller's play about the Salem witch trials. Ward also turned out symphonies, concertos, cantatas, songs, musical comedy, ballet and much more. His work has been staged by top companies across Europe and Asia in many languages, sometimes under his baton.

The Crucible is one of the finest American operas ever written. It may improve on the play, as Verdi improved Shakespeare.  Ward's music makes the violence and terror of the Salem witch trials audible.  In stark contrast, tender moments in the powerful drama are soothingly presented.

Orchestration, conducted in Santa Barbara by Kostis Protopapas, moves from lush textures to simple ballads with ease and in harmony with the developing plot.  Tragedy is portrayed in dark notes. Lightness strikes in typically American sounds. Perhaps inspired by a superb libretto by Bernard Stambler, the music flows easily.  Both words and music are carved out for theatrical effect.  The orchestration is often both luxurious and urgent.  Yet it is the voices which articulate a perfect combination of words, sometimes almost spoken,  and at others tuneful.

Director Stephanie Harvey has just the right touch in structuring the drama.  The setting is simple, with risers on stage, woods surrounding them and changing light, which evokes both time and day and mood.

The curtain rises on the Reverend Samuel Parris (Robert Norman) kneeling at the bed of his daughter Betty. She lies immobile and scarcely breathing. Tituba, sung by the superb Nina Yoshida Nelson, comes to ask about Betty but is angrily sent away.

Abigail enters to say that the town is whispering of witchcraft and that Parris should go out to make a denial. He bitterly turns to question her about the dancing and about her mysterious dismissal from the service of the Proctors. As she vehemently denies any wrongdoing, the Putnams enter. Their daughter Ruth was stricken at the same time as Betty Parris and that they have sent to Beverly (Mass.) for the Reverend Hale, known for his skill in discovering witches.

Rebecca and Francis Nurse enter with Giles Corey. Rebecca is comforting, old Giles is flippant about the illness of the girls. Benjamin Brecher captures Giles with a defiant verve and wisdom as he sings of the insanity swirling around him.

When Putnam insists that witches are at work in Salem, Giles accuses him of using a witch scare to buy up Salem land. A traditional choral psalm is sung,  beseeching God’s help. As the psalm proceeds, Betty begins to writhe on the bed and then with an unearthly shriek tries to fly out of the window.

Reverend Hale arrives. He learns that Tituba has played an important role in what has been happening, having also been present at the dancing. Ann Putnam asserts that Tituba knows conjuring. Tituba is sent for. At her entrance, Abigail, who has been under severe inquisition by Hale, lashes out to accuse Tituba of compacting with the Devil. Tituba finally confesses that she has been visited by the Devil.  Here Nelson captivates, denying that the Devil has persuaded her into any wrongdoing. She is frightening, describing in song the power the Devil has offered her.

In Act II we meet John Proctor (Wayne Tigges) returning from a day’s planting to find Elizabeth (Audrey Babcock) too quiet and sad. Babock is both firm and yielding as she pleads with her husband to expose Abigail, even though this will expose his ‘lechery’ with her.  Tigges captures the ambivalence and confusion in John, as he sings of his fears of Abigail and Elizabeth’s freezing out.

Babcock combines sweet notes on which she remembers the early tenderness of their love.  She is iron as she describes the threat of Abigail to people’s lives.

Mary Warren (Jennifer Lindsey) returns from her day in court and wiggles and squirms as she tries to avoid the demand that she tell the truth and save lives.

The scene in which Mary accuses Elizabeth of trying to kill Abigail with a witches’ puppet is as tortured as Ward and Stambler meant it to be.  Elizabeth is removed to a military beat and John gets Mary to promise to tell the truth to the court.  He will completely ruin himself rather than see Elizabeth hung for his sake.

In Act III, Anya Mantanovic as Abigail shines in her ambivalent swings between her passion for John and her scheming to get rid of Elizabeth and have him for herself.  Tigges captures John’s passion, which he has willed aside, and his fury at compromising his wife.

Judge Danforth’s invocation in court reveals the strength and fervor of his conviction that God’s will is working through him to cleanse the land of a plague of witches.

As court opens, Giles Corey accuses Thomas Putnam, in his greed for his neighbors’ land, of having bragged of his role in the charges of witchcraft.   This is one version of Salem history, which currently focuses on a quarrel between the town and the surrounding area over a minister’s salary and wood for his home during a bitter winter.

John Proctor wants to live and is given permission to lie by his wife.  He cannot.  Here Tigges is particularly moving as he struggles between the wish to do what is right and the wish to live.

Miller’s look at hysteria in communities and its evil aftermath is a reminder that we must always beware.  As serious as the proposition of this opera is, it is also jaunty and rhythmic and engaging throughout.  The conductor and director are responsible for honoring this terrific, very American opera.

About Robert Ward: Composer Robert Ward was a child soprano at Miles Park Presbyterian Church in Ohio. He performed madrigals and Gilbert and Sullivan songs at John Adams High School. At 16, he taught himself music theory and composition.

He later wrote on a record jacket, "The Presbyterian Church, our musical home and Cleveland's fine public schools familiarized me with every genre of vocal music."

Ward won a scholarship to the Eastman School of Music in Rochester, N.Y., and went on to Juilliard School in New York. He studied with Aaron Copland at what was then called the Berkshire Music Festival.

His "Second Symphony" was performed by Hans the National Symphony Orchestra, then Eugene Ormandy and the Philadelphia Orchestra.

In 1967, he became president of the North Carolina School of the Arts in Winston-Salem, N.C., where he raised buildings and reorganized the administration. In 1974, he left the school's helm but stayed on the faculty.

Ward’s early influences were Debussy, Ravel, Hindemith, Stravinsky, and jazz, and while he would become known as a musical traditionalist and a neo-Romantic, he didn’t hesitate to incorporate tone rows into his music. Over the years he composed eight operas, seven symphonies, numerous choral and chamber works, and a ballet. Ward, a self-described eclectic and truly American composer, told the Cleveland Plain Dealer music critic Donald Rosenberg in 1994, “I’ve gone on writing what I’ve wanted to write. You’ve got to write your own music.”

Ward was a National Endowment of the Arts Opera Honoree in 2011. Extolled as being plainspoken, down-to-earth, and kind, Ward also had a keen sense of humor. In 1997, he told the Raleigh, N.C., Spectator that while teaching at Juilliard, “I wondered whether musicians would recognize themes when the rhythm was entirely different from the original, so I took a melody that I knew the students would all know and rewrote it, violating the usual stresses and giving it another rhythmic form. I dictated it to them and said, ‘I want you to look at that and see if it reminds you of any other melodies.’ Well, they thought and they thought, but they didn’t recognize it at all—except that they felt it was familiar. I then played it in the original form. It was ‘The Star-Spangled Banner.’”